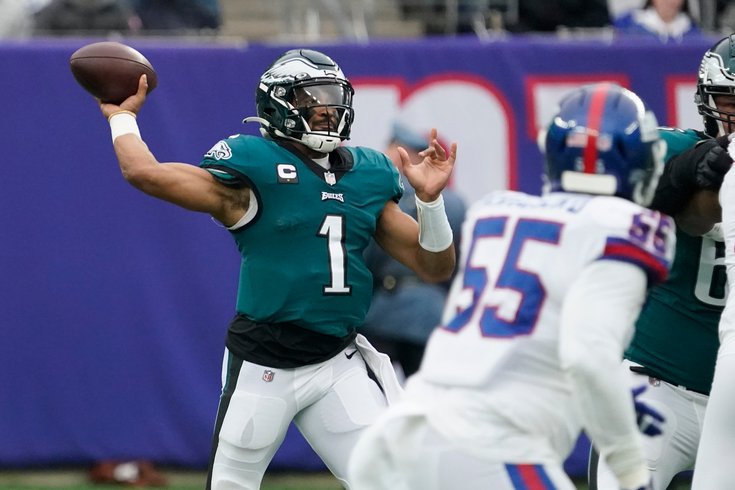 Jalen Hurts played his worst game as a pro against the Giants, and will be looking to 'flush' that performance.

For the gambling enthusiasts, here are my Week 16 NFL picks. To note, the team logos indicate who I think will win the game, not cover the spread. At the end of the picks, I'll note a few teams that I like based on the spread — with all Week 16 lines coming via Sidelines.io.

49ers (-3) at Titans: This is a noteworthy game for the Eagles both in terms of playoff positioning and draft pick implications. The Niners lead the Birds in the NFC wildcard race, while the Titans hold a one-game lead over the Colts in the AFC South. The Eagles should be rooting hard for Tennessee.

The Titans once had a three-game lead over the Colts in the AFC South, plus a head-to-head tiebreaker, but they are in serious danger of relinquishing their divisional lead.

It appears that Derrick Henry could be back for Tennessee's playoff run, and with fresh legs, but until then they're limping toward the finish line. Meanwhile, the 49ers have been playing their best football of the season of late.

Browns at Packers (-7.5): The Browns still have 17 players on their COVID list, and while a number of them will come off this week, it's hard to trust that they can overcome those issues. And even if so, they're obviously not on the Packers' level.

Colts at Cardinals (-1): I'm a little surprised the Cardinals are favored in this game, since the Colts are one of the hottest teams in the NFL, while the Cardinals have lost two straight, including a bad, lopsided loss to the Lions. Indy's fast, swarming defense has been impressive, and Jonathan Taylor is a legitimate MVP candidate. As long as Carson Wentz doesn't go out of his way to mess it up (like he almost did against the Patri*ts last Saturday), this team should continue to cruise.

Giants at Eagles (-10): The Giants were already a mess, and say what you will about Daniel Jones, but they've looked even worse without him. Mike Glennon has seen action in four games this season. He is completing just 53.5 percent of his passes, while throwing 3 TDs vs. 7 INTs. The Giants lost all four games in which he has appeared.

It'll either be Glennon or Jake Fromm starting for the Giants in Philly this Sunday. It doesn't matter who gets the call. The Eagles almost beat this trash team with Jalen Hurts playing by far his worst game as a professional quarterback a few weeks ago. With even a slight improvement, the Eagles should be able to handle their business against the Giants this time around.

Lions at Falcons (-6): In their last six games, the Lions are 2-3-1, with two of their losses coming by three or fewer points. They've continued to play hard in a miserable season, so I'll take the six points here, and what the hell... let's take them to win while we're at it.

Ravens at Bengals (-3): Lamar Jackson has thrown 16 TDs vs. 13 INTs in 2021, and he's having his most ineffective season as a runner. How did he get voted to the Pro Bowl? The Ravens have lost three straight tight games, and while they have experience playing late-season games that matter and the Bengals don't, it does feel lke these are two teams heading in opposite directions, at least in 2021. Tough call, but give me Cincy.

Rams (-3) at Vikings: The Rams seem to have put a mid-season slump behind them, and are now pushing for an NFC West divisional title.

Beasley aside (he doesn't really matter much in the outcome of this game), the Patri*ts were perhaps the hottest team in the NFL before their slip-up against the Colts, while the Bills have been wildly inconsistent.

Jaguars at Jets (Pk): I literally flipped a coin.

BREAKING: Panthers coach Matt Rhule said Cam Newton will start Sunday vs. Buccaneers and have a major role in the game, but that Sam Darnold will play at some point.

I hate big lines in the NFL, but this one is tempting.

Chargers (-10) at Texans: With games against the Texans, Broncos, and Raiders to close out their season, the Chargers have a shot at finishing 11-6.

Steelers at Chiefs (-7.5): The Chiefs are the best team in the NFL. Apologies for forgetting that, Andy.

Broncos at Raiders (-1): So I have to choose between a Raiders team limping to the finish line, and Drew Lock, huh? Ugh. At least the Broncos have a good defense?

Football Team at Cowboys (-10.5): A few late slip-ups aside, the Cowboys emphatically outplayed a healthy version of the Football Team in Maryland a couple weeks ago. They'll smash a depleted version of this team in Dallas.

Dolphins at Saints (-3): The Dolphins' defense is balling, and they'll get to face a running back playing quarterback on Monday night. This line indicates that oddsmakers think that these teams are equal, with the Saints getting the home three-point bump. I think there's a little bit of an overreaction to New Orleans' shutout over the Bucs last week going on here. The Dolphins are playing better, more consistent football in the second half of the season.