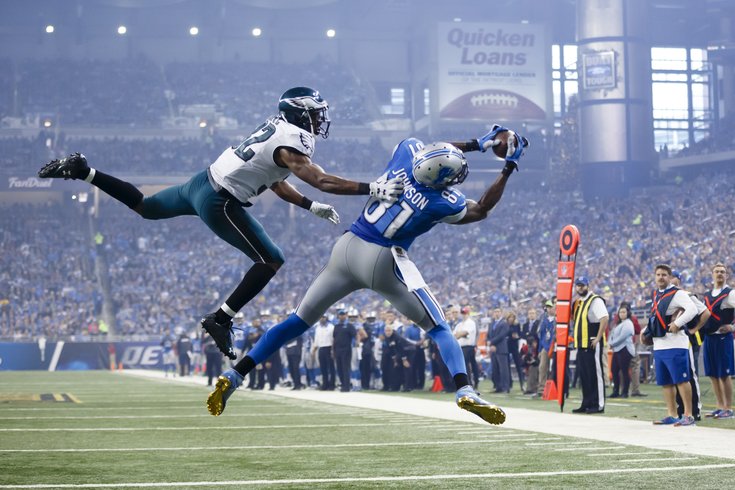 A year ago, Calvin Johnson welcomed Eric Rowe to the NFL on Thanksgiving, while Ziggy Ansah obliterated Dennis Kelly for 60 minutes. In all likelihood, none of those four players will take the field this Sunday in Detroit.

For the gambling degenerates, here are my Week 5 NFL picks. To note, the helmets indicate who I think will win the game, not cover the spread. At the end of the picks, I'll note a few teams that I like based on the spread.

Cardinals (-4) at 49ers: The Cardinals are in desperate need of a win after starting 1-3, with losses to the Deflatey McGee-less Patri*ts, the Bills, and the Rams. They may have to pick up a win without starting quarterback Carson Palmer, who suffered a concussion against the Rams last Sunday.

On the one hand, a short week is the wrong week to have a concussed quarterback who does not have the full advantage of six recovery days. On the other hand, if you're going to be missing your quarterback, it may as well be against the crappy Niners.

Patri*ts (-10) at Browns: Deflatey McGee returns to the Patri*ts this week, who should easily dispatch of the worst team in the NFL, without even cheating.

Eagles (-3) at Lions: For the fourth consecutive game, as we noted in our five matchups to watch, with Lions stud pass rusher Ziggy Ansah likely out, the Eagles will face an opposing defense with a starting front seven that lacks consistent, experienced pass rushers. In their first three games against the Browns, Bears, and Steelers, the Eagles' offensive line has given rookie quarterback Carson Wentz plenty of time to throw, and Wentz has made opposing secondaries pay the price. That should be the case once again this Sunday in Detroit.

On the other side of the ball, the Lions should find it difficult to run the ball against the Eagles' defense (or against any other defense, for that matter). Starting running back Ameer Abdullah is on IR, backup Dwayne Washington missed practice this week with an ankle injury, and Theo Riddick, while a good receiver out of the backfield, has just a 2.98 yards per carry average over his career. Meanwhile, the Eagles are third in the NFL is rush defense, allowing just over 70 rushing yards per game.

Those are two lopsided advantages in favor of the Eagles. This matchup may have the feel of a "trap game," but the Lions are banged up and lacking quality depth. The Eagles continue their hot streak, 30-17.

Redskins at Ravens (-4): All of the Ravens' games so far this season have been decided by six or fewer points, as were 12 of their 16 games a year ago. Based on that, I do like the Redskins and the points. The Ravens have the No. 1 defense in the league right now, yardage-wise. The Redskins are 29th.

Texans at Vikings (-6): Although Houston is 3-1, Brock Osweiler simply hasn't been very good through his first four games as the Texans' starting quarterback. Meanwhile, the Vikings have faced Marcus Mariota, Aaron Rodgers, Cam Newton, and Eli Manning, holding them to a collective QB rating of 67.7.

Jets at Steelers (-7): As we all saw, the Steelers were blown out by 31 points in Philadelphia against the Eagles, and yet, they still have the second-best point differential in the AFC, at +28. The Jets have a good defense, but it's not enough to make up for the awful play of Ryan Fitzpatrick.

Falcons at Broncos (-5.5): This is such a good matchup. The Falcons are gaining 83 more yards per game -- and have scored 31 more points -- than any other team in the NFL. They are also averaging an incredible 354.2 passing yards per game, which was obviously helped out enormously by Julio Jones' 300-yard receiving game last Sunday. The Broncos' incredible defense, however, is averaging 169.5 passing yards allowed per game. When it's strength on strength, I'll normally side with the defense.

In their two losses this season, the Bengals were killed by X plays. The Broncos got behind the Bengals' D for 41- and 55-yard touchdown passes, while the Steelers burned them for 53- and 44-yard deep balls that did not score, but led to a pair of touchdowns.

The Cowboys have not shown a willingness to take shots down the field with rookie Dak Prescott, and it could be more difficult to sustain longer drives against a veteran Bengals defense than it was against teams like the Redskins, Bears, and 49ers.

Bills at Rams (-2.5): If you have strong feelings one way or the other about these two highly erratic teams, you're a better man (or woman) than me.

Chargers at Raiders (-3.5): The Chargers are 1-3, but have lost their three games by a combined 11 points, which makes them the participation trophy champions of the NFL. As Donald Trump would say, they're loosahs.

Giants at Packers (-7): The Giants' secondary is in bad shape heading into Lambeau this week. There are four Giants DBs listed on their Wednesday injury report:

It's a good thing the Packers don't have a world-class quarterback and good receivers. Oh, wait.

Buccaneers at Panthers (-7): Because Cam Newton suffered a concussion last Sunday and his status for this Monday is unknown, most sportsbooks don't have a line on this game yet, although CG Technology has the Panthers at -7. I don't care who starts for the Panthers. The Bucs are garbage.