A 'Dancin' on Air' 'star' pursues Hollywood dreams in the South Jersey woods, while a host ponders nuptial sponsorship 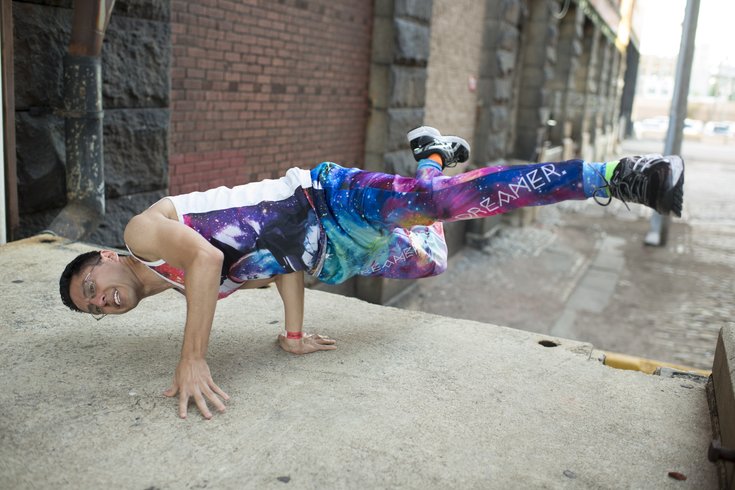 Ro-Ro-Ro-Rogelio Gonzalez busts a move in preparation for another appearance on "Dancin' on Air."

As the curtain rises on "Saturday Morning Fever’s" second episode, Ro-Ro-Ro-Rogelio Gonzalez – the dancing king who still lives with his mother – sets the stage for the 30 minutes ahead as he’s shown stretching himself into a pre-dance back injury.

“Tonight is the night,” he says. “It is just right for a, uh, dance spotlight and, uh, tonight is finally the night for me to leave my mark on this, uh, dance floor and, uh, later on, my, uh, very good friend is directing a movie this week and Ro-Ro-Ro-Rogelio will be an actor in a movie called ‘The Dark Military.’”

Oh, this should be good.

Sure enough, the "Dancin’ on Air" aspect of Fuse’s new show is limited; this episode is about two-pronged character development. There are dueling plotlines.

The first follows Rogelio’s foray into acting via an H-list movie filmed in the woods 30 miles outside Philly in Gloucester County (New Jersey).

The second involves host Casey Reed and her girlfriend Brittany pondering the ramifications of trading privacy/dignity for the financial perks of Q-102 advertisers “endorsing” her big gay wedding.

After Ro-Ro-Ro-Rogelio perseveres though a spinal boo-boo to crush grooves set to DJ Sev-One’s tracks – starting off haltingly, he goes full b-boy into a move called “The Suicide” – he’s shown in his mother’s living room shooting “professional” headshots with a remote-controlled camera on a tripod.

Removing his glasses during the frugal modeling session, he explains the philosophy behind giving photo viewers “different looks” to capture the magic and essence of who one is and the promise who one could be.

He then does a kitchen script read with his cousin Karen, who's holding his niece, as he proudly explains that the little kid from the “Chucky” movies will be in the movie, too. Which is totally awesome.

When we arrive on set in Franklinville, New Jersey, the scene-setter is a hatchet embedded in the side of a tree. Ro-Ro-Ro-Rogelio announces his intentions to make sure everybody there knows who he is.

He does this by telling stories about how a cat followed him around one time, requesting that someone make him blueberry or chocolate chip pancakes and eating a pickle while explaining that he eats whatever his mother grabs on her way home from work, which is often Mexican takeout.

There is limited footage of his scenes – the director is shown in “Commando”-style body paint – so we’ll have to wait until “The Dark Military” reaches the small screen to see how Ro-Ro-Ro-Rogelio running away from what might be a zombie plays.

Meanwhile, over in Casey’s dining room, she and Brittany are “doing the gayest thing ever … making a vision board,” which includes potential wedding dresses and rings for a nuptial event that hasn’t seen the engagement phase yet come into play.

During at-work discussions with Sarah and Todd of the Q-102 sales team, the idea of helping shoulder the cost of a potential “Casey’s Big! Gay! Lesbian! Wedding!” through on-air endorsements of dresses and rings and limos is broached and embraced.

This is a proposal, however, that must be taken home to Brittany, who, per Casey, is not likely to go for it. She kind of does but needs to see how it plays out so as not to pimp out what is supposed to be a sacred life event between two people.

Both plotlines are left unresolved, so we’ll have to wait until Fuse’s docu-series returns next Wednesday at 11 p.m. to see what happened next. That's what you call a solid use of cliffhangers.