The mythical hobbit holes that punctuate the neighborhood were created years ago, but this past winter their creator fell ill 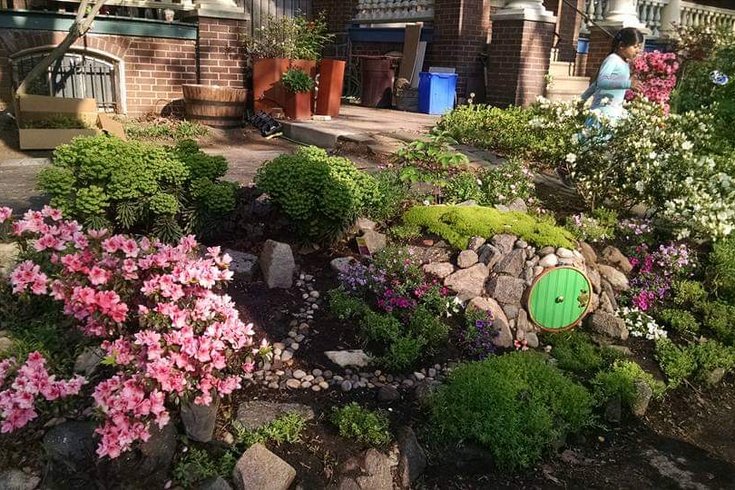 The hobbit door Peter Stathis and his family built outside their home in full bloom last spring.

The 500 block of South 46th Street in West Philly is another pleasant block above the hobbit hole.

Homeowners and renters try to get along, kids play on the sidewalk, people tend to their lawns, and in the summertime they sit on their porches.

For years they’ve sat above the portal to a world just below that little door. Actually, it’s been about four years. It was then that the first hobbit door — a small, circular plywood hatch painted green, perched against rocks and hidden in shrubs — popped up to house the neighborhood's tinier, more magical population.

Viviane McCreary is known as an avid gardener on her tight-knit block. Neighbors say she's always outside, on her knees weeding or laying a fresh bed of mulch. One day four years ago she suggested to her neighbor across the street, Peter Stathis, a landlord and former fantasy comic book creator, they combine their respective talents in a joint venture.

Pulling up debris in the front lawn? Nah. But gardening to recreate Middle Earth? Stathis said he was sold on that idea. They landed on recreating the map in "The Hobbit" by J.R. Tolkien in the Stathis family's front garden. 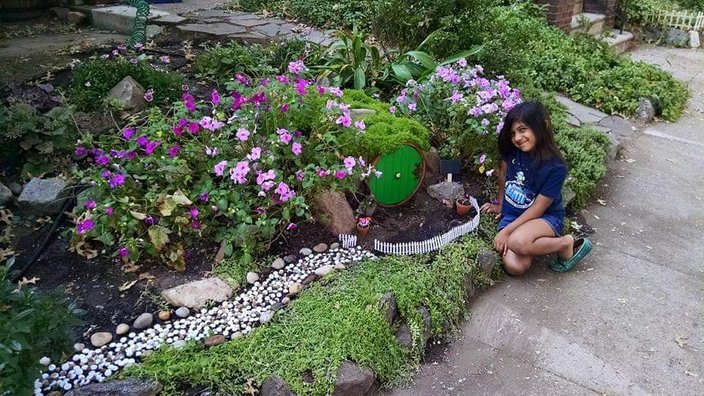 The Stathis family's front lawn is home to the first hobbit door in West Philly.

In the warm weather, Stathis said he sits outside on the porch with a drink to chat with people that come by. He can't make it 45 minutes without someone stopping to look, take a photo. Local artists drop off signs, figurines, plants. Children leave presents for the creatures that live beyond the door.

They've since made two more on the block and inspired others in the neighborhood to craft their own.

On 44th Street near Walnut, performing artist Terry Fields made a little door that he laid over the oil fill valve on his building after he saw the 46th Street door. His partner and fellow performer, Marisol Rivera, decorated it with modeling clay based on an image from a book of fairies that she keeps at home.

"More than likely, everyone was just inspired by the first one,” Fields said. “It’s just too much of a coincidence. I was like, ‘That is the cutest thing ever.’ It looks better than having a hole in the brick."

A small door inspired by Viviane McCreary's hobbit door was put up on 44th Street near Walnut.

"It’s one of those things were you feel like you put good vibes or something nice and beautiful out into the world expecting nothing back, but you get it back any way," Stathis said. "That’s the power of art."

"I didn’t realize that gardening ... touched so many people"

So, 46th Street forged on with its own plans for an expanding garden. A mountain — home to dragons, of course — and the mystic tree gods, the Ents, were in the works. They wanted it to keep growing.

But on July 4 of last summer, the village paused. A neighbor broke into McCreary's house because she hadn't been answering the door. No one had seen her out gardening. The neighbor found her unconscious and rushed McCreary to Presbyterian Hospital where doctors spent days trying to find the source of a massive infection spreading throughout her body.

It turns out McCreary spent one too many days inhaling one bad batch of mulch infected with the Legionella bacteria. She contracted Legionnares' Disease that went untreated, leaving her catatonic and on a breathing tube.

Looking back, she said she doesn't remember anything that happened last summer.

"I’m telling you," she said. "I went to sleep at the end of June, and I woke up and it was the end of August. So that was that. In all honesty, I just don’t know."

Stathis said the whole block came to her rescue, visiting the hospital to read and talk to her. That's when the the GoFundMe page surfaced to help stabilize her finances while she was recovered. She was in danger of losing her home and didn't have healthcare. There was the mortgage, the mounting hospital bills, and rehabilitation.

A sign decorated with twinkle lights was jammed into the mud in front of the hobbit hole this winter, letting the village know where Viv had gone.

As McCreary has said time and again: "It takes a village." 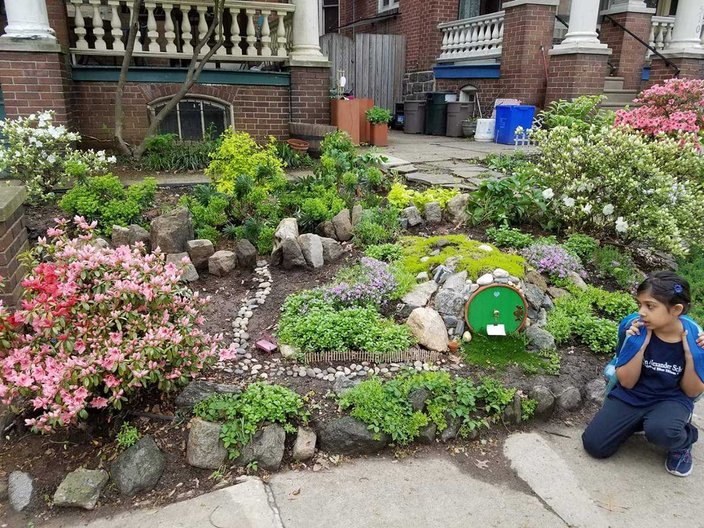 The hobbit door in Peter Stathis' front lawn has drawn children and families across the neighborhood.

Now, a couple of months into the campaign and her recovery, Stathis said the combined efforts of the GoFundMe and other donations are up to about $8,000. McCreary is back on her feet, returned to work, and is hopeful for her gardening dexterity to return by spring.

"It was just a quirky thing that I got sick because of gardening," she said. "But it doesn’t daunt me. I’m still going to garden."

Both her recovery and getting back to the garden are a slow process. But it's coming along, she said.

"Peter is just a great neighbor to have and my neighbors just really make me feel good, in the sense that I didn’t realize that gardening the way I do, I have touched so many people," she said.

We're approaching spring now, so Stathis said they've started to plot new additions to the shire. By the summertime, a next-door neighbor's yard will boast an elven village, McCreary will add those Ents, luminescent white flowers will glow in the evening, and Stathis will finish The Lonely Mountain, complete with a plastic dragon at its peek.

They're putting out a call for more hobbits in the neighborhood, too.

McCreary and Stathis want to keep expanding the map. But they'd like all of the doors to look uniform, for continuity's sake. Stathis offers to provide neighbors with the dimensions and a how-to for crafting their own hobbit doors, and McCreary can help map the gardens surrounding the new doors.