We ride along with Philly's MPeachHim tiler, who's spreading her anti-Trump message curb to curb 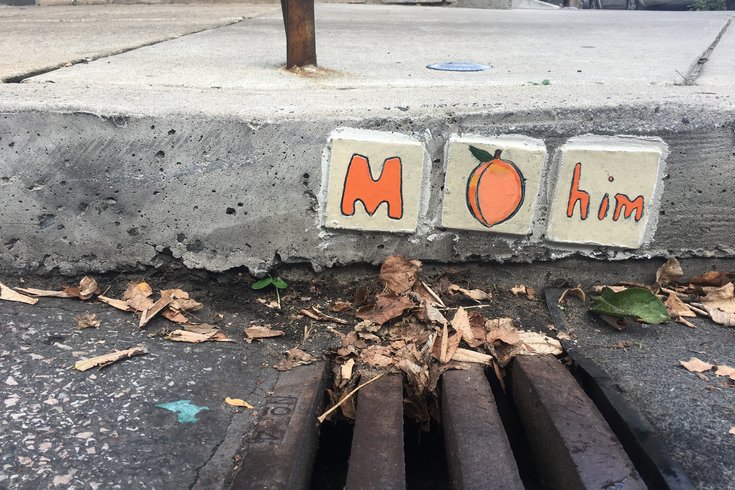 These MPeachHim tiles are attached on the curb near 22nd and Carpenter streets in South Philly.

The MPeachHim phenomena started in August.

The little glazed tiles started popping up all over the place in the summer months – sets of three politically-charged, orange pictures painted as mosaics and installed with mortar on curbs around Philadelphia. Each is outfitted with an "M," followed by an illustrated peach, and the word "Him," creating a sort of rebus puzzle: Impeach him.

The "Him" being President Donald Trump, of course.

The artist – whose real name is being withheld and instead is being identified by her childhood nickname, Bucket, which is also her name on the Instagram account where she posts photos of her work – started making and installing the campy tiles all over the city and into suburbs as her own show of resistance to Trump.

It's a reminder that impeachment is an option. It's an act of political desperation, she said.

I accompanied her on an installation day this week that followed her summer sabbatical, during which she made a slew of tiles for fall.

It's the day after Pennsylvania's voter registration deadline had passed, and we're living in a post-Brett Kavanaugh world now, just a couple weeks after the emotional hearings that resulted in him being confirmed to a lifetime appointment to the U.S. Supreme Court.

Bucket and I set out with nine sets of MPeachHim tiles secured with bubble wrap and stowed in an old pizza box, four bags of mortar in plastic sandwich baggies, kitchen scissors, one accomplice who drove the getaway vehicle, and a hat and sunglasses for disguise.

We start at 22nd and Washington streets and drive north until we find an ideal stretch of curb. Bucket wants visibility — pedestrian activity, no parking — but nothing that will interfere with someone's business or home – or the installation process itself, either.

Bucket warms up a bag of mortar in her hands as our accomplice lets the car linger near a stretch of curb at 22nd and Carpenter. She cuts the corner of a baggie, creating a makeshift mortar bag, takes out her first tile, spreads the mortar like icing on its back and plops herself down on the curb, facing the car.

Then she smushes an "M" tile against the concrete and holds it in place for a few seconds, looking around to make sure no one is too interested. 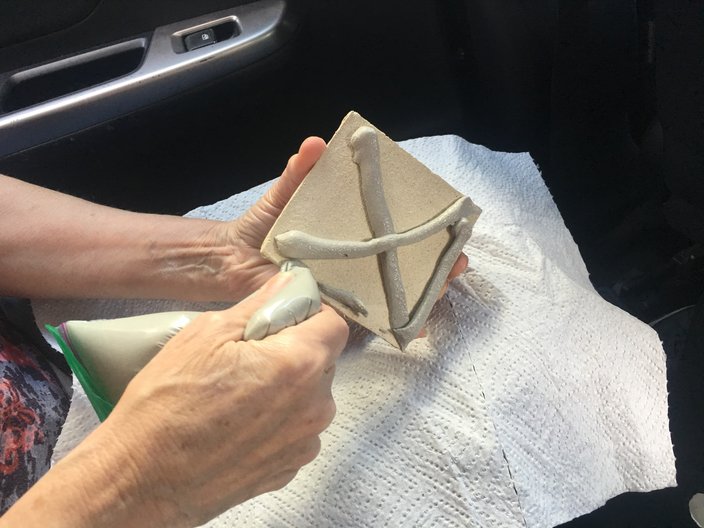 The MPeachHim artist spreads mortar on a tile. 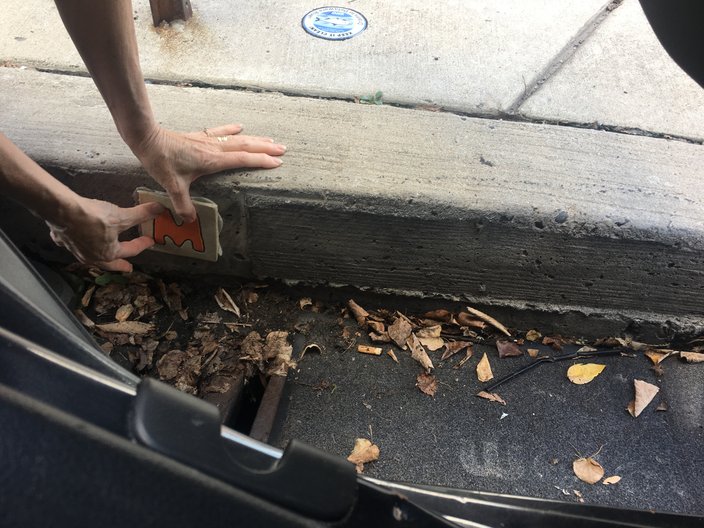 The MPeachHim artist places a tile on a curb at 22nd and Carpenter streets. 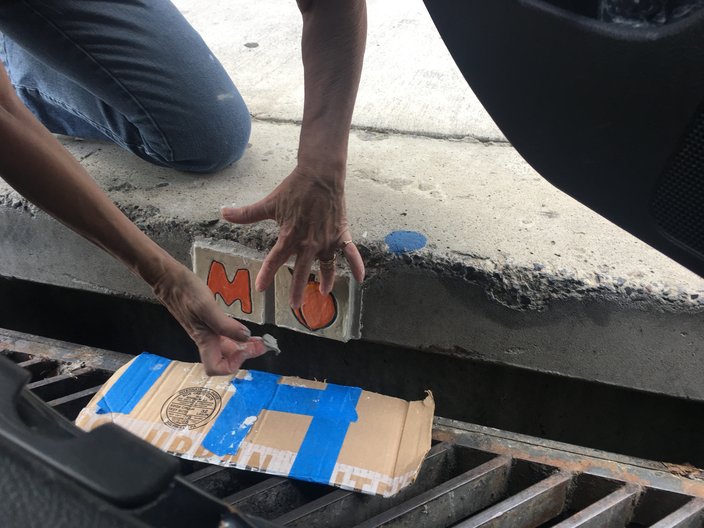 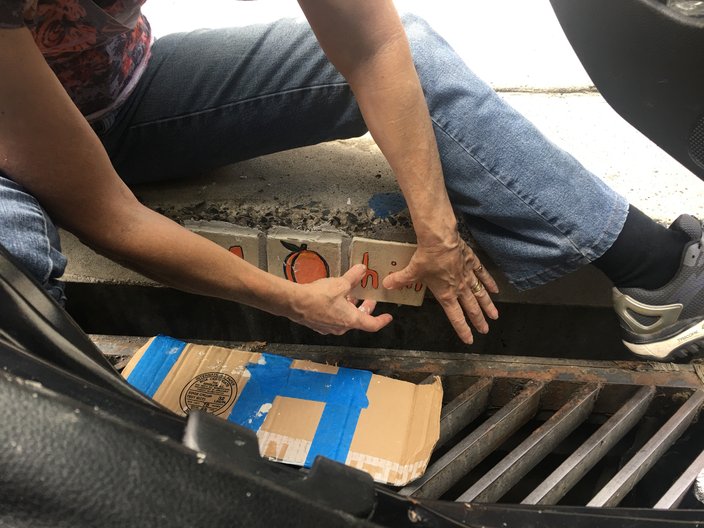 The MPeachHim artist installs a set of tiles on 22nd and South streets.

But no one is. We idle for 15 minutes uninterrupted.

No one ever makes a fuss over them. Sometimes a passerby looks down at her for a minute, but it's only a minute. During past installations, Bucket said, a few concerned citizens have approached her, but it's because they think she has fallen, is getting sick, or is having car trouble.

"When you're a white older women," she said, "you're invisible."

Bucket lines her pointer finger with mortar and seals the edges so the tiles don't slip or tilt. It's not perfect, she said, it's artisan. She takes a photo of her newest work, makes sure everything is dry and the curb is cleaned, and we're on our way.

The whole thing started as a creative outlet. Bucket and her friends were downhearted, numb, immobilized after the 2016 election of President Trump, she said. It was cathartic to make tiles, which she said are glazed six times and fired twice so they're weather resistant. In other words, they are time consuming. It's a blow when one gets taken down or destroyed — and they do.

"But I think I'd be losing my mind if I didn't do anything," she said. 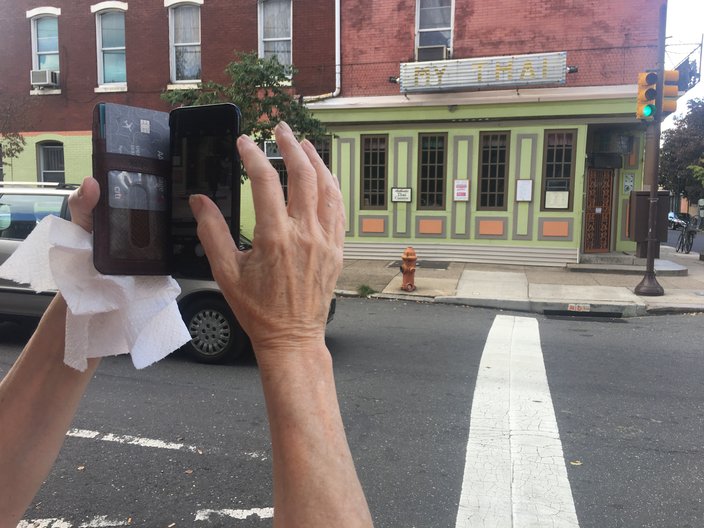 The MPeachHim artist takes a photo of a new set of tiles installed at 22nd and South streets. 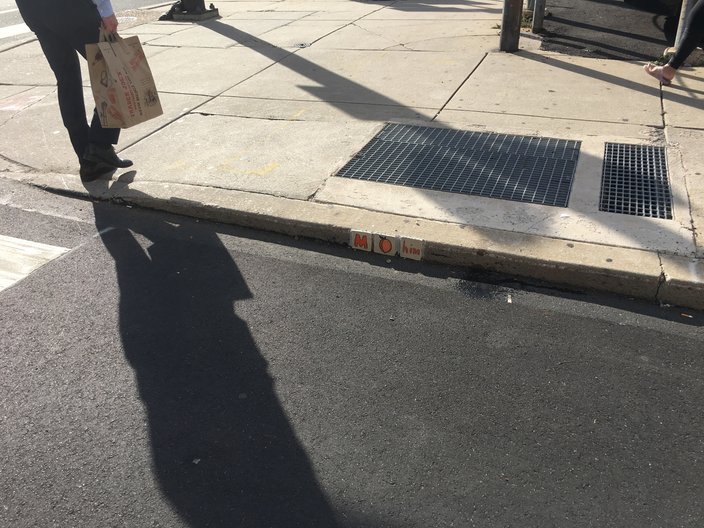 MPeachHim tiles are seen here on a curb at 22nd and Market streets in Center City.

Now, Bucket, a rookie street artist with a background in sculpture, has installed upwards of 50 tile mosaics and has 580 followers on Instagram tracking her progress.

Artists in other cities are trying to send her money to make MPeachHim tiles for their neighborhoods. And supporters try to protect the tiles from an anonymous counter-resistance who knock them off the curbs and attempt to obscure their impeachment messages with black paint. She said she receives regular updates on social media on the status of her works.

"I was quite moved by how much this seems to mean to people when they see it," Bucket said. "My hope is that this is the tiniest of pebbles in the very small pond, but it’s meant to remind people that this is not normal."

RELATED: Five places in Philly to indulge your pumpkin cravings

Later, we meander up 22nd Street, installing MPeachHim tiles at busy intersections at South Street and then Market Street. But no one stops, no one looks. We hide in plain sight.

"They're all in wholesome denial their democracy is under siege," she laughed.

In the car she tells me a story about installing a popular set near City Hall, where it was crowded and she was nervous. Heart pounding, she walked with a tile in hand, slathered with mortar, ready for placement, and thought about why she was doing it. She thought how betrayed and angry she felt with each new piece of news coming out of the White House.

By the time she got to the curb, she said she unabashedly slammed it right on there.

"I just want people to use this as an example of coming up with creative ways to do their own resistance," she said. "It gets hard to sustain hope when in an environment [where] it seems that an overwhelming majority of our leadership has become blind, deaf, and speechless."

"In my own little way," Bucket said, "I'm trying to keep this on the agenda."