What does autism awareness mean to autistic people? 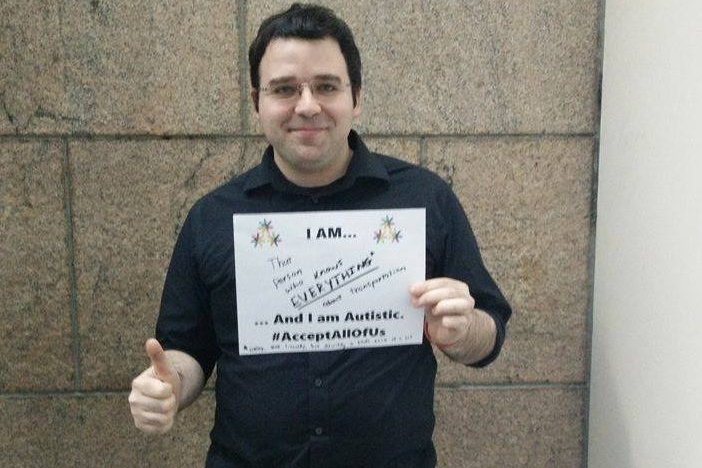 Aaron Zisook, the leader of the New Jersey chapter of the Autistic Self-Advocacy Network, holds up a sign promoting autism acceptance.

As April draws to a close, so does Autism Awareness Month, a movement created to educate neurotypical people on the basics of what Autism Spectrum Disorder means.

But what does awareness mean to autistic people themselves?

Many argue that it's a great first step, but there has to be more: acceptance, advocacy — and, finally, action.

"Awareness gets the point where people know that something exists, but acceptance gets us to a place where people understand how to interact, how to unlock everybody's potential," said Aaron Zisook, 26, a Rutgers graduate student who leads the New Jersey chapter of the Autistic Self-Advocacy Network (ASAN), an international community of autistic adults.

For 25-year-old David Loewenstein, an autistic man living in Narberth, awareness means understanding that Autism Spectrum Disorder "is a massive umbrella term for a whole mess of issues."

"You can't go by something you've read about one person with autism," he argues. The word "spectrum" is so broad, in fact, that he questions whether the label is useful at all.

Zisook agrees that every autistic person is different. The media, however, tends to portray them as one of two stereotypes: either "some brilliant genius or savant" or "these vegetables [who] are nonverbal and destroy families."

One way those stereotypes can be promulgated is through the label of "high-functioning" and "low-functioning."

She uses herself as an example: as a bright young woman who is earning her masters in social work at Rutgers. She seems to be the poster child for "high-functioning," but she can also "have a complete meltdown" if plans change suddenly.

"Someone who's nonverbal but has very good skills in other areas, they might be able to ride the bus," he said.

That distinction is important to consider when government agencies decide which symptoms qualify a disabled person for special accommodations like paratransit service.

"The biggest thing that the autistic community -- and ASAN in particular -- really believe in is when it comes to these decisions, we should have a voice," said Zisook.

'There should be room for our advocacy'

One of the issues that Cramer is most passionate about is fighting for the abolishment of the sub-minimum wage, where employers are allowed to pay disabled people as little as pennies per hour. Another issue is training police on how to work with autistic or mentally ill people, which Cramer is particularly concerned about because she knows a fellow ASAN member who was "beaten up" after he had a meltdown in front of police.

"There is an excessive focus on the caregiver and that we are sort of coached by society to find the caregiver more sympathetic or more worthy of our attention or time than the autistic person," she said.

She found this for herself when she was doing a school project on how autistic people process grief.

"If you (put) 'autism and grief' into Google Scholar," said Cramer, "all the results are about the grief felt by caregivers who have autistic people to care for."

Zisook points out that the prominent organization Autism Speaks has only two autistic people on its 30-person Board of Directors, Stephen Shore and Valerie Paradiz. Both were added to the board in December.

"Our advocacy is that there should be room for our advocacy," said Zisook. "But that's something that over the years has been an uphill battle."