What happens if the Eagles lose opener to laughingstock Browns? 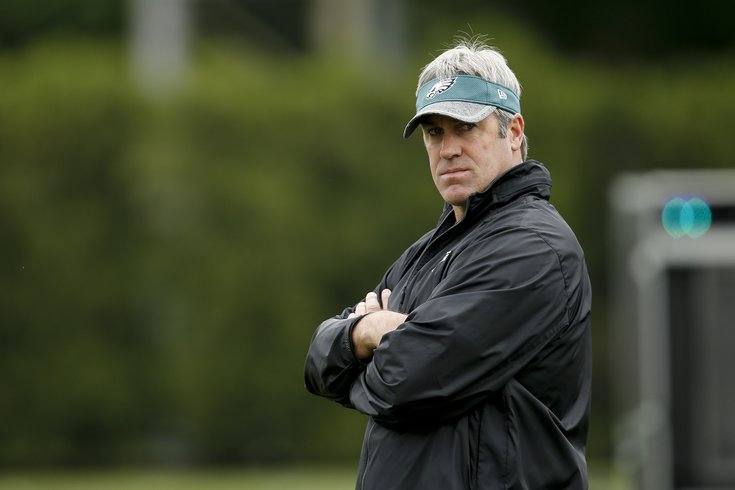 Eagles head coach Doug Pederson better beat the Browns in Week 1 ... or else.

The next important sports event in Philadelphia is exactly two months from today, an innocuous listing on the Eagles schedule that will chart the course for an entire season.

Have the Eagles ever faced an opening game as dangerous as this one? A victory against the worst team in the NFL – at home, no less – should be an absolute certainty, even though the Eagles are hardly a lock to be any better than a .500 team themselves in 2016.

The opponent is the laughingstock of football, the Cleveland Browns who finished 3-13 last year, their eighth straight losing season. They are so putrid, they are not favored to win a single game in 2016. In fact, Vegas already has them as 7.5-point underdogs in the opener.

But what if Cleveland is better now, with Robert Griffin III at quarterback? What if Sam Bradford needs more time to learn his third offensive system in three years? What if Doug Pederson is not ready to be an NFL head coach?

Facing the Browns in the season opener is a great way to start a football season, unless you lose. Then it is a catastrophe. Just consider for a moment the implications of a season-opening defeat:

• The cries to replace Bradford with Carson Wentz will begin.
• Concerns about Pederson’s status as head coach will grow.
• Howie Roseman’s rebirth as GM will be stillborn.
• The fans will be apoplectic.

Think about it. Eagles fans wait seven torturous months for the start of a new football season. To lose to Cleveland in the very first game would instantly turn their excitement into anger, their hope into rage. The domino effect would be instantaneous.

Bradford’s hold on the city right now, even after a new deal worth $22 million in guaranteed money, is no stronger than the fate of his next pass. If he were to lose the opener, many fans would seek the solace of a future with Wentz as the quarterback, not Bradford.

From the last play of that demoralizing opener, the countdown would begin on how long it will take for the likeable kid from North Dakota to start his first game in the NFL, Bradford be damned. After all, if the Birds can’t beat Cleveland, is there any reason to hold out hope for 2016 anyway?

Inevitably, Pederson’s already dubious background as a coach would come under far more scrutiny. Remember, he has never been a head coach beyond high school, and no one really believes he had the powers of an offensive coordinator under Andy Reid in Kansas City. Fans also haven’t forgotten he was 2-7 as a starter here in 1999. Once a loser, always a loser – or so his critics would say.

And when the complaining about Pederson subsides, it definitely will move on to Roseman, whose worldwide odyssey to improve as a GM led him to Reid’s protégé. The new, improved Roseman would be neither if his team lost to Cleveland. He would revert right back to owner Jeff Lurie’s sad little yes man.

Not enough is made of the power of the fans in Philadelphia. Their dislike of Chip Kelly was a major factor in his abrupt dismissal last season, just as fan dissent had a direct bearing on president Joe Banner’s departure four years ago. What the fans think is important in Philadelphia.

And that’s why it would be a really terrible idea for the Eagles to lose to Cleveland exactly two months from today.

Some of the most powerful voices in professional basketball – including Charles Barkley and Stephen A. Smith – have crucified Kevin Durant over his decision last week to sign a free-agent contract with Golden State. They are calling it cowardly, disloyal and unsportsmanlike.

Durant exercised his right to do what every fan expects an elite athlete to aspire to – win a championship. Durant merely surveyed the field of teams seeking his services and determined that the Warriors were the best bet. What’s wrong with that?

The arguments raining down on Durant have been as idiotic as they have been shrill. Critics are saying he is trying to weasel his way to a title – rather than beating the enemy, he chose to join them. Why not try to derail Golden State’s 73-win juggernaut, the way his former Oklahoma State team nearly did last month?

There are two very good reasons for Durant’s sensible decision. First of all, he earned his freedom. He completed his contract, played by the rules and was rewarded with the right to choose where to play. And second, he waged his immediate future on the best team available.

(OK, technically there was a third reason – the two-year, $54-million contract he will sign this week. Never forget the money, especially when it’s $27 million a year.)

It’s always amusing when hypocrites like Barkley tell other athletes to do something he never would have done himself. Doesn’t he remember that he forced his way off the Sixers after eight years because he had decided the team couldn’t win a championship here? Or that he did the same thing in Phoenix four years later?

Charles Barkley has often said his biggest regret is that he never got to experience what LeBron James just did, a massive parade filled with adoring fans in a city euphoric over his team. Every one of these NBA superstars is rich beyond his dreams, but none has reached the ultimate goal until he has hoisted a championship trophy.

Kevin Durant would like that opportunity, so he decided to join Golden State last week. He is an extraordinary player who made a very reasonable decision. Anybody who says otherwise is wrong.

I suddenly realized it must be early July when I caught myself watching a soccer game on TV last week. Soccer, the most boring game known to man, is the last resort to a fan in this black hole on the sports calendar.

Consider our current predicament. Football, by far the most compelling sport, is on hiatus for a couple of more weeks before training camps open, basketball and hockey just completed their drafts and baseball is not compelling when your team is eight games under .500 at the All-Star break.

Decades ago, this week was actually one we all anticipated, when the All-Star Game was truly an event. Back then, the only time the two leagues faced each other was in the World Series, except for this one contest comprising the very best players in the game. It’s hard to believe now, but players once even cared who won that game.

Now, the best pitchers don’t pitch unless they’ve had the proper rest, some of the best position players beg off because they would prefer a four-day vacation, and the game itself has been meaningless since interleague play began 19 years ago. (Unless you care about home-field advantage in the World Series. I don’t.)

I’ve always said that the months when a sports-talk host really earns his money are February and July. After the Super Bowl, the depression of the end of the NFL season and meaningless NBA and NHL games is hard to accept. And most of July is even worse, too late for the winter-sports playoffs and drafts, and too early for football.

Of course, everything changes in Philadelphia on July 25, when the Eagles open training camp. After that, it’ll be the Carson Wentz drama, the Sam Bradford farce, the Doug Pederson mystery and the Howie Roseman image-rehabilitation tour. Even if they’re bad, the Eagles are always interesting.

Until then, I suggest that you find a good book to read, or maybe even spend some time with the family. But don’t watch soccer. Even in this black hole on the sports calendar, watching soccer is an act of sheer desperation.

•  Clueless New York sports fans outdid themselves last week with cheers for admitted domestic abuser Jose Reyes upon his return to the Mets. Of course, these morons are the same lost souls who gave a standing ovation to Keith Hernandez when he came back from a drug suspension many years ago. This may be an overgeneralization, but New York fans are stupid.

•  Walking along the beach last week, I was saddened to hear not one radio booming out the Phillies game. Five years ago, you could follow the team’s contests without a radio. My point is, rebuilding is not something Philadelphia embraces. If you aren’t winning, we prefer silence.

•  The Flyers first-round pick, German Rubstov, won’t join the team for two years, and GM Ron Hextall said he’s in no hurry to promote the team’s two best prospects, Ivan Provorov and Travis Konecny. Boy, Hextall sure knows how to drum up excitement, doesn’t he?

•  It’s just a matter of days now until the NFL makes official the decision to hold the 2017 draft in Philadelphia. Unfortunately, the Eagles will not have a first-round pick – unless they make a trade – because they gave it up in the Carson Wentz deal. So who are we going to boo? Oh, I’ve got it. The Cowboys.

•  Larry Brown walked away from what may be his last job in coaching at SMU last Friday because the school wouldn’t give him a long-term deal. Long-term deal? The ex-Sixer coach is 75. The only long-term deal you get at that age is Medicare.