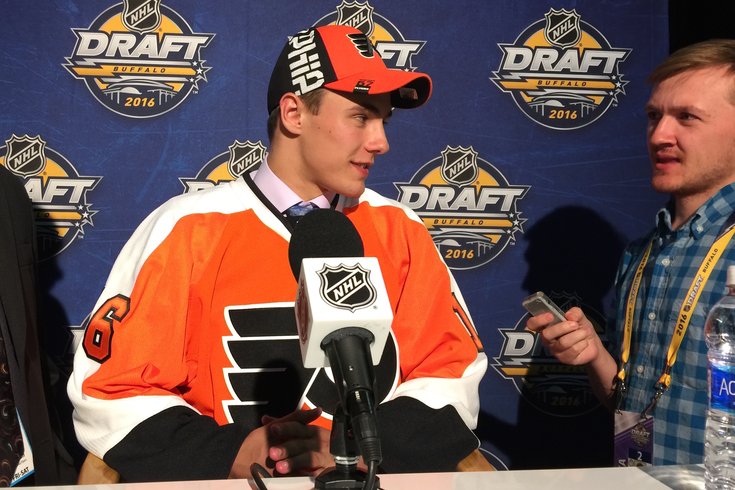 Forward German Rubstov meets with the media after being selected by the Flyers with the 22nd pick in the 2016 NHL Entry Draft.

When Ron Hextall and the Philadelphia Flyers drafted German Rubstov, an 18-year-old Russian forward, with the 22nd overall pick in last month's NHL Entry Draft, they already knew that he wouldn't be donning the Orange and Black for at least a few more years.

Where he would be playing in the meantime, however, was still somewhat up in the air.

Now, that picture is a little less blurry after Rubstov told Russian news outlet 360 TV that he plans to stay in Europe for the next two years. Here's a translation of his comments via BroadStreetHockey.com:

“After the draft, nothing has changed for me,” Rubtsov said. “My main goal is to get into [the KHL], and I will do everything in my power to get into Vityaz and into the Russian youth team. It was discussed with the Philadelphia Flyers. I have a contract and it would be better for me to spend that time in the KHL. There were no options to buy the contract out, so I will continue to carry it out and at the moment.”

When asked through a translator at the draft two weeks ago, Rubtsov said that his agent was working to get him out of his Russian contract, which lasts for two more seasons with HC Vityaz. Rubtsov played for the club’s lower-tier junior team previously but appears likely to jump up to their KHL squad this coming season.

On draft night, Hextall said that he didn't expect Rubstov to be able to get from under his current two year deal, but that the organization was "comfortable" with him playing in the KHL this year, rather than with the Flyers AHL affiliate in Lehigh Valley.

Hextall also said that it would be "terrific" if Rubstov could get out of his contract earlier, but that does not appear to be the Russian's plan.

“I'll work off the whole contract here in Russia, at least that is the situation now," Rubstov added, according to BroadStreetHockey. "There will be no escaping or contract termination. Nothing similar to escapes of [Sergei] Fedorov or [Alex] Mogilny. I do not need such scandals.”