For Provorov and Konecny, it’s the NHL or back to junior hockey in 2016-17 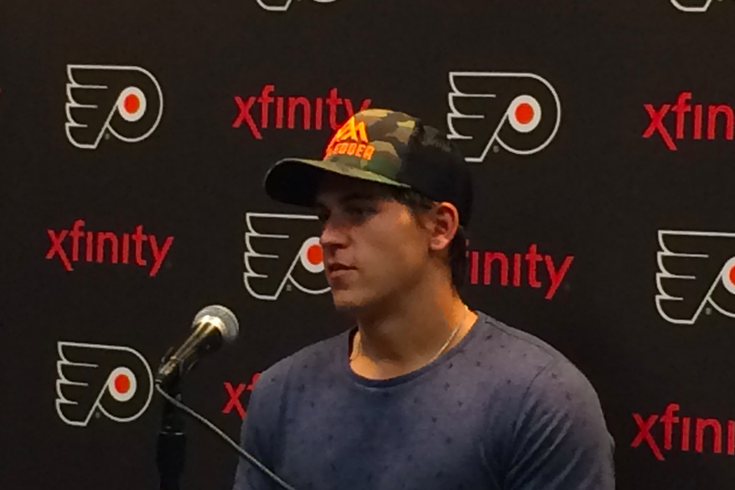 “I got a great group back in Sarnia where I’m playing, coaching staff and players, so it would definitely be a privilege to play back there. But the goal is to play up here.”

There are more than 30 prospects in Voorhees this week, but the “NHL or bust” question truly only applies to two of them: Konecny and Ivan Provorov. Because both top prospects don’t turn 20 years old until after December 31st, they’ll play in the NHL out of training camp or head back to Brandon or Sarnia, respectively.

Unlike 20-year-old Travis Sanheim, the AHL isn’t an option for Konecny or Provorov, even if their skill level dictates that they’re almost assuredly ready for a new challenge. So the question posed to them was a simple one: What can you realistically take from another year in juniors?

If you ask the man who will determine their fate, Konecny or Provorov could try to become the Sidney Crosby or Drew Doughty of the CHL.

“I think any player can be the best player in junior hockey,” Flyers general manager Ron Hextall said. “That would be any of those guys if they go back. We want all of our players to be better than they were last year.”

Both players aren’t too far off from that already. Provorov was already named the CHL’s top defenseman in 2015-16, and it seems like the 2015 NHL Draft’s seventh overall pick has a decent chance of making the Flyers out of training camp.

“I think it’s hard to make the NHL,” Provorov said. “It’s the best league in the world and all of the best players in the world play in this league. If you work hard and stay humble and try to get better every day, I think you’ll be able to make a transition at any age.”

Listening to Hextall, you get the sense that he’s worried about whether the player is NHL-ready, not what level of hockey the alternative is. Provorov, a two-way defenseman with few weaknesses in his game, seems to (and we’re stealing a line from the other team I cover…) trust the process.

“Ron Hextall is a smart guy,” Provorov said. “He knows what he’s doing, and he’s in charge of everything. I think he tries to do the best for the players.”

Last season, Konecny finished eighth in the OHL with 101 points in 60 games. In training camp, he’ll have to compete for one of the team’s 12 forward spots. And despite his preference to stay with the big club, Konecny echoed Hextall’s sentiments about finding areas of his game to work on in case he is sent back down to juniors.

Hextall says that Konecny, a smaller forward who possesses the ability to make extremely creative plays with the puck, has made some progress in terms of adding bulk (which will be important playing against bigger defensemen for 82 games). Konecny impressed during the 2015 preseason but the Flyers ultimately sent him back down to juniors, a decision Hextall says he doesn’t regret in hindsight.

“If you look at Travis Konecny, he was a better player last year than the year before and that’s exactly what we want to see,” Hextall said. “If we would have kept Travis, last year he had a pretty good camp and stuff, would he have been as good of a player right now? There is no way in hell.”

In terms of making a decision at training camp, Hextall did allow that a strong season in juniors tends to help a player’s chances and “affords them a longer look.”

“A tryout is not two weeks long,” Hextall said. “It’s not a fair barometer, and quite honestly to make a decision on a week or two of training camp, how smart would I be? Not very.”

Provorov and Konecny are probably both guaranteed a pretty long look then, but that's all.