What they're saying about the Flyers: Does Claude Giroux get enough respect? 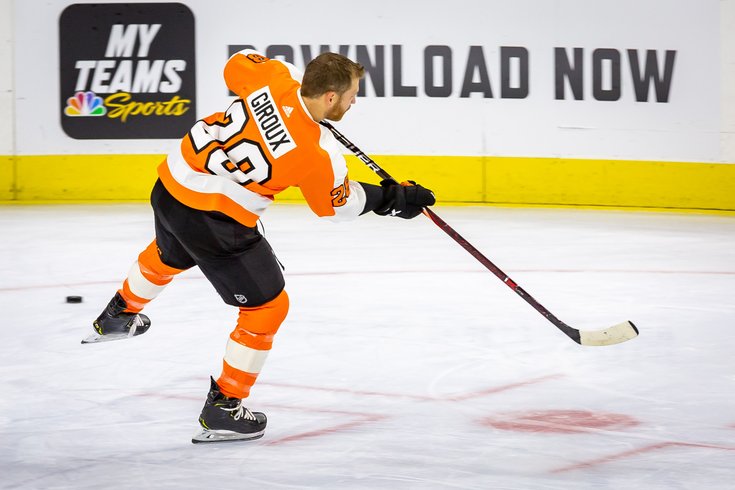 Claude Giroux of the Philadelphia Flyers practices before a game against the Arizona Coyotes at the Wells Fargo Center in South Philadelphia.

The Flyers are in a weird spot as an organization, as they currently sport the second fewest points (just 44) in all of hockey at the NHL's All-Star break.

Still on the roster are Philadelphia staples Claude Giroux (the team's lone all-star), Wayne Simmonds and Jake Voracek. The roster is reinforced by what on paper appears to be a long list of up-and-coming skaters, including Nolan Patrick and Travis Konecny — as well as rookie goalie Carter Hart.

And yet, the optimism isn't really there (it's just as absent as wins are). The roadmap to success isn't an easy path to find for fans and front officers alike.

If you're looking for good news, well, we don't have much for you. Instead, watch Gritty skating as fast as he can at the All-Star Skills Competition:

Okay, time to focus now. Here's a look at some of the more interesting takes on this storied franchise before the second half begins next week:

Hart of a champion?

Giroux is 31 years old and starting to resemble an elder statesman both at the All-Star Game and in the Flyers' locker room. He has all the makings of becoming an all-time great — but there is a lot of work to do if he hopes to be up there with Bobby Clarke atop 'best Flyer of all time' discussions. Is a reliable, steady and prolific goalie the thing he's missing?

If Giroux averages between 85-90 points (depending on where he finishes this season) over the final three years of his current eight-year contract, he and Clarke will be the organization’s only two members of the 1,000-point club. But before we can link those two stars in the same stratosphere, Giroux has to lead this franchise to a championship.

For starters, he has to win a playoff series again, and his best shot of winning a Stanley Cup undoubtedly will be with Carter Hart in net. The Flyers' rookie goaltender has proven to be well ahead of the NHL timetable that many expected. During Thursday’s media day, Giroux compared Hart to the kid's idol Carey Price, the Canadiens' goalie who also broke into the NHL at the age of 20.

"I was watching him during practice the other time and I told Sean Couturier I thought he looked a lot like [Price]," Giroux told TVA speaking in French. “Sure, he still has time before he gets to his level, but in his way of life, Carter reminds me a lot of Carey. He is calm and always in a good position.” [NBC Sports Philadelphia]

The Flyers are currently 14 points out of the final playoff spot in the East and part of the blame is on the team's anemic special teams — particularly with the man advantage. The below synopsis of just how bad the power play unit is, is a little technical, but it's worth trying to follow. Long story short, they're historically terrible.

Currently, Philadelphia holds an Expected Goals Created Per 60 rate of 7.72 during 5-on-4 situations — third in the NHL. Their actual 5-on-4 Goals For per 60 rate, however, sits at 4.58, a minus-3.14 gap between the expected number and real life. How does that match up with other NHL teams since 2010 (excluding the lockout half-season)? It’s actually the biggest discrepancy of the decade.

No team this decade has finished with as large of a gap between the xG-related process and actual results on the power play than the Flyers, and it’s not particularly close, either. One piece of (possibly?) good news for the Flyers...? The 2015-16 Leafs [the team with the next worst rate all time] famously rode weak goaltending and an unsustainably poor power play to the worst record in hockey that season, earning the No. 1 overall pick and Auston Matthews as a result of the draft lottery. Sound like a familiar process?  [The Athletic]

Broad Street Hockey has gotten a head start on breaking down trade possibilities ahead of the NHL's trade deadline at the end of February, of which there are likely many with the Flyers looking to be in rebuild mode. They already broke down the market for Michael Raffl, and this week — after making the argument that perhaps Radko Gudas is worth hanging onto — looked at what a return could be for the stingy defenseman.

Now to the fun part; what could Radko Gudas get the Philadelphia Flyers in return? Honestly I hate doing these kind of projections, because none of us really know and it all depends upon how much the other GM is willing to give up. If the Leafs go on a brief losing streak prior to the deadline, and their defense is the clear contributor to the losses, Dubas possibly gives up a bit more than he’d originally want to.

If I’m Chuck Fletcher, there are a few players in particular that I’d be calling for. First off would be forward Andreas Johnsson. He’s a speedy and talented forward who gives the Flyers some much needed zip in the forward core. This season, Johnsson has 22 points in 43 games including a hat trick vs. Philadelphia earlier in the season. The Leafs have plenty of young forward depth, and may be willing to part with some for help on the blue line.

Jeremy Bracco could be another possibility, a point per game player in the AHL. Forward Trevor Moore would also be a possibility, who had 27 points in 32 games with the Toronto Marlies before receiving a call-up recently. Now, the Flyers would most likely want some defense in return, and this could come with players such as Justin Holl who had 28 points in 60 games last year with the Marlies, but has been a healthy scratch at the NHL level for all but two games this season.

A mid-round pick would most likely be in the discussion as well, but if the Maple Leafs come calling for Gudas, these are some of the players I believe would be in the running to come back in the trade. [Broad Street Hockey]

And finally, an interesting take from twitter we wanted to share. Circling back to Giroux, making his sixth All Star appearance, and his historical significance in this city. In several interesting categories, the career of the one we call 'G' mirrors the call 'AI.'

Ben Livingston, a producer at SportsRadio 94 WIP, tweeted out the following career numbers and wondered why Allen Iverson is treated like a "deity" in Philly while Giroux is, well, not...

Does Giroux deserve better? He's in his prime, but in any pro sport, when one enters his 30s, a decline isn't far behind.

Enjoy the sniping forward while you can.