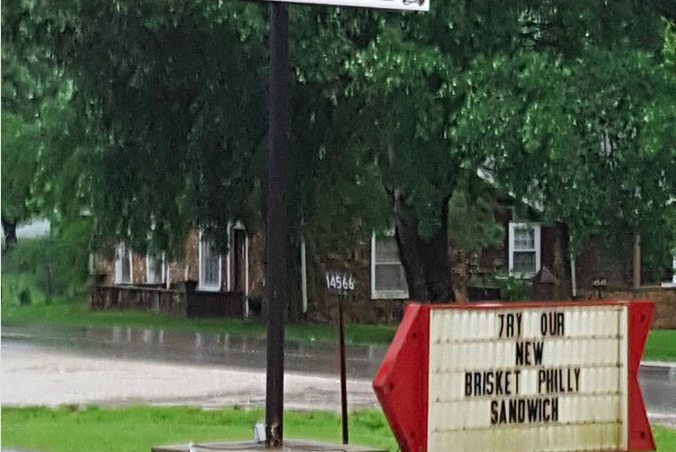 So, what exactly is a 'Brisket Philly Sandwich' as advertised at this roadside cafe in Missouri?

Sarah Kendzior is a writer and prolific tweeter who was once named among “the 100 people you should be following on Twitter to make sense of global events.”

While she often tackles matters of international importance, an image she posted on Saturday afternoon swirled in my head throughout Memorial Day Weekend.

“A week ago I was giving a talk to foreign dignitaries in Estonia, now I'm hiding from a tornado in Country Bob's,” she tweeted.

The Country Bob’s she referenced was County Bob’s Café, a family dining eatery (with a weekend buffet) located in St. James, Missouri.

That’s a small town located near Mark Twain National Forest about 85 miles southwest of St. Louis. It’s the type of place for which an Elvis impersonator helped ring in its first anniversary of operation, which means it’s a very cool place, and well-respected on Yelp, at that.

The tornado warning she referenced was issued by the National Weather Service at 4:06 p.m. local time on Saturday, an afternoon during which severe weather pummeled the region before getting on its way.

Neither of those details was what grabbed my attention. Rather, it was an old-school sign outside Country Joe’s urging passersby and customers to “Try Our New Brisket Philly Sandwich.”

A week ago I was giving a talk to foreign dignitaries in Estonia, now I'm hiding from a tornado in Country Bob's... pic.twitter.com/LCR0SPB35U

I’ve lived in and around Philly for quite some time now and have yet to see any similar offering.

Well, the good people at Country Bob’s were kind enough to break it all down for me Tuesday morning. Spoiler alert: It’s pretty self-explanatory.

“We’ve been smoking meat for quite a while now and introduced this a couple months ago,” said the owner, who gave her name only as Julia. "It’s brisket made with onions, peppers, mushrooms and American cheese. It’s served on a hoagie roll.”

Yes, she used the phrase "hoagie roll" without prompting from her Philadelphia-based inquisitor. This is a good thing.

She also noted that the Brisket Philly Sandwich has been well received by her customers. This is also a good thing.

It seems as if it’s not as unusual an offering as one would think. After all, people seem to like their cheesesteak variations across the country.

Numerous people inquired as to the deliciousness of said offering. Alas, Kendzior did not try it.

@SteveDavis90 Dunno, we got the sawdust pie. It was great!

With that, our investigation into the Brisket Philly Sandwich comes to an end, though the desire to try one will carry on.