Will the thick, syrupy-like soda with the secret family recipe hold on for much longer? The owners are keeping mum 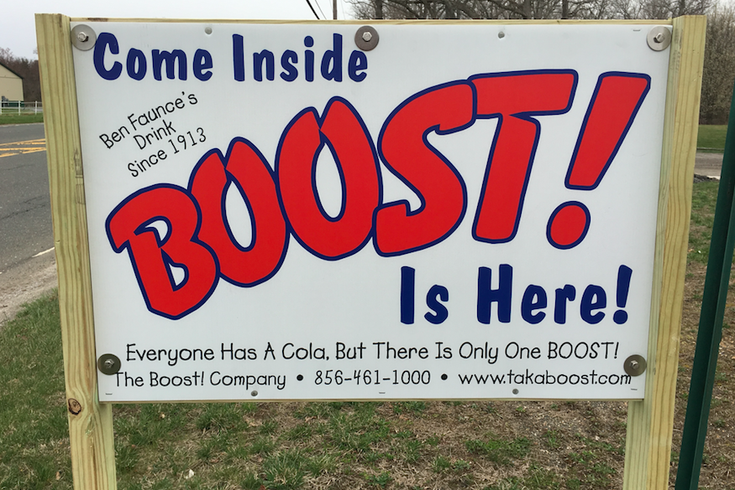 BOOST! is advertised outside the Pine Barrens Store on Route 206 in Shamong, N.J.

“I called and ordered a case and your company was so nice and helpful. The case arrived (rather quickly) and I tore into it like a 5-year old at Christmas. That first cup of BOOST! was the greatest thing I have ever tasted. With temperatures reaching 126 degrees, that was, and still is, the best gift I have ever received!”

This testimonial comes from Delran, N.J.’s Ron Manka, a sergeant who served in Iraq from 2004 to 2005. Ordering a case of BOOST! to the Middle East, Manka is just one of the dozens of devoted fans who have publicly professed their appreciation for BOOST!, South Jersey’s very own bespoke beverage.

With a flavor that’s been described as a more viscous version of flat cola, the drink comes in concentrate form and is sold in mom and pop delis, pizzerias and groceries in and around Riverside, N.J. And it was in a Riverside pharmacy where BOOST! was created by Ben Faunce in 1913.

In a time before pre-packaged medicines, Faunce and other pharmacists concocted their own lines of wellness tonics, syrups, tablets and pills. As the story goes, his original formula for BOOST! (then known as Tak-Aboost) was created as a “recreational drink,” sold from a tap in the pharmacy’s soda fountain. And like most great drinks, the recipe remains a Faunce family secret to this day.

Manny Monteiro, owner of the Shamong Diner & Restaurant in Shamong, N.J. and neighboring Pine Barrens Store has been stocking BOOST! for the past year.

“It’s a drink that tastes just like a non-cartooned Coke and is very high in caffeine,” he explains.

“The customers were the ones that told me about it and said that I have to get BOOST! because no one carries it around here.”

Although the diner doesn’t sell BOOST! by the glass, many patrons pick up a bottle next door and bring it in to accompany their meal. According to Monteiro, BOOST! is an all-day beverage.

“The owner of the company told me that some people drink it in place of coffee. It’s popular for breakfast, lunch and dinner.

“I recently had a mom and son come in. The mother was in her 80s and her son lives in Cape May. They saw the BOOST! sign out front and turned right in. The son told me that his mom gave it to him in a baby bottle!”

But when PhillyVoice reached out to Daniel McDonough, president and general manager of The Boost! Company, he replied via e-mail that now was not a good time for an interview. The reason why remains a mystery.

According to an ad from the 1930s, the health benefits of BOOST! ranged far and wide. It was touted as an endurance booster for athletes, a cure for seasickness and an aid to improve the digestibility of milk. But the real magic (and enduring popularity) of BOOST! most likely comes from its purportedly over-the-top caffeine content.

Much like the keepers of the original formula for Coca-Cola, the family-run BOOST! company is tight-lipped when it comes to their recipe. But hearsay around Riverside is that the concentrate has a whopping four times the amount of caffeine as Mountain Dew.

These days, Jersey residents can get their BOOST! fix by picking up glass bottles of the stuff at any number of local shops or via the company’s site, which will ship their wares basically anywhere in the world. The company’s offerings have expanded to include a range of fruit flavors made for slushie machines as well as concentrates that come in sugar- and caffeine-free varieties. But when it comes to old-school BOOST! enjoyment, there’s only one way to go – mixed with water, served in a paper cup, with a pair of hard pretzels hanging off of the straw.