Yo, Philly: Don't diss the Lehigh Valley-style cheesesteak until you've tried it 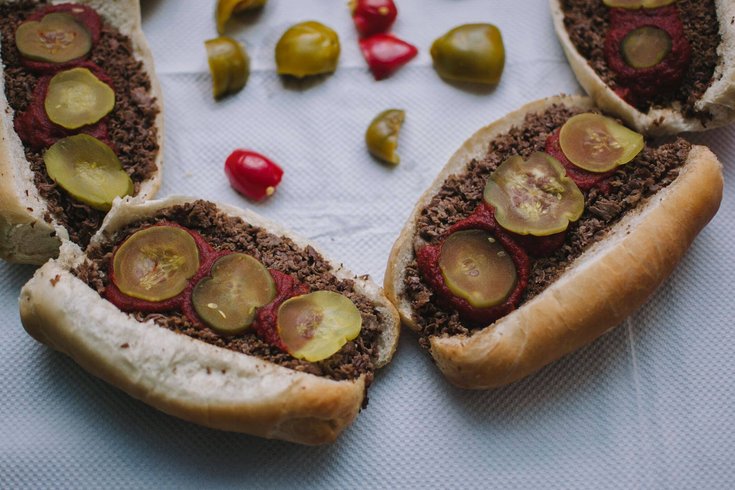 Lehigh Valley-style cheesesteaks from The Brass Rail in Allentown.

Philadelphians, I want you to close your eyes and imagine something: You're standing at your favorite cheesesteak joint, waiting for your sandwich. Finally, your name is called. You grab your paper-wrapped lunch and sit down, tear off the tape and unravel to find...

A cheesesteak in a softer-than-custom bun, covered in red sauce with pickles lined up in perfect formation and hot peppers hidden within the meat.

Not so, if you grew up about an hour north of Philly in the Lehigh Valley. This is a Valley steak, first brought to the area at the Brass Rail in Allentown by owner Philip Sorrentino 80 years ago, at least according to his grandson and current owner, Mark Sorrentino.

Mark doesn't know why exactly his grandfather decided to first pour his original tomato-based sauce (read: not marinara, like on a pizza steak) on his steak sandwiches.

"If I had to guess, it would be he that didn't want to have something exactly like a Philly cheesesteak," Sorrentino said. "He wanted his own — now Phil's original."

"A lot of times people take that as, 'Oh, you mean Philly.'"

Nope. Fast forward to now, and pretty much every bar food joint and pizza shop in the Valley carries the same style of steak — everything on it means sauce, pickles and hot peppers. 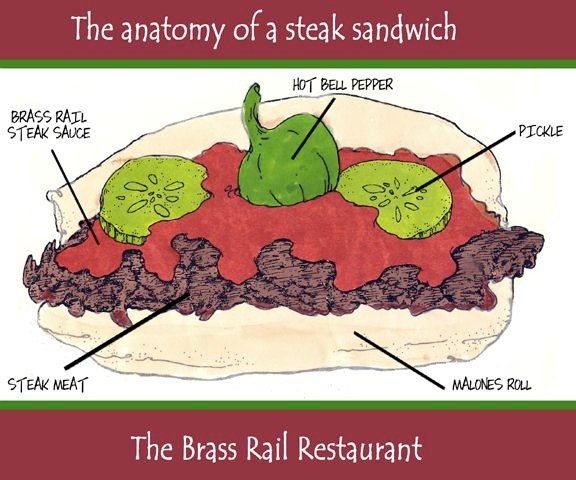 An anatomy of the Lehigh Valley-style cheesesteak.

Unsurprisingly, Philadelphians are at the least skeptical of any modification to their most famous food, as seen by this reaction in a series of tweets about a jar of Bethlehem-based Tallarico’s “Philly Style” Steak Sandwich Sauce that led to a dueling article from my colleague, Brian Hickey, who looks at the Lehigh Valley steak from the perspective of a Philly-area native.


But to those who've grown up also scarfing down Yocco's hot dogs and chugging A-Treat soda, a standard steak sandwich comes with the works. For the people who serve them up Valley-style, they know how alien their creations are to Philly natives.

Mike Matey, owner of Matey's in Fountain Hill, said he can always tell who isn't from the area when they order a cheesesteak. The most obvious are those who order their steaks with Cheez Whiz, which he keeps on hand even though the Philly standard isn’t what he normally uses.

On his flagship sandwich, Matey uses a thinner sauce, an 80-year-old family recipe that's more like a marinade. He puts the sauce and peppers in with the ribeye steak then covers it with cheese, baking them to blend all the ingredients together before topping it off with the pickles. Matey swears he's had converts, especially when he gives doubtful customers a side of sauce to take home, a move he said has a 90-percent success rate.

Sauce, pickles and peppers is the mainstay combo for both Matey's and The Brass Rail, but both offer several varieties of steaks, much like many Philly joints. Matey's offers a garlic bread steak, while The Brass Rail has one with chili sauce.

While noted Philly cheesesteak vendor Tony Luke told Hickey he has a problem with using sauce for flavor, saying doing so means "you should go somewhere else to get a cheesesteak," both Sorrentino and Matey contend that their sauce only heightens the cheesesteak experience.

"Technically, I think the sauce adds a unique flavor to it," Sorrentino said, before getting in a jab of his own.

"I've had a Tony Luke's [cheesesteak], it was kind of on the blander side, but then again, I'm kind of used to it with the sauce."

"You still get the cheesesteak flavor, but you get a little bit more flavor," he added.

Matey agrees. He argued the sauce, which he likes soaked through the sandwich, brings out a "unique" taste that's missing in a traditional Philly cheesesteak.

Besides, as both noted, lots of people — even Philadelphians – bastardize their cheesesteaks. Matey cringed at those who add ketchup and mayonnaise. Sorrentino recalled one frequent customer who used to get his steak with fried onions and, brace yourself — anchovies and mustard.

Look, this is likely a futile effort. I know that. The cheesesteak is Philly, obviously, but it's so Philly that the natural reaction is to scoff or cry foul at any variation, even if its rooted in a tradition of its own and not some out-of-state knock off.

That's OK. But before you hammer down the gavel on Valley cheesesteaks, just eat one first. Hell, Hickey tried a hybrid Valley steak with canned sauce, and even he admitted it wasn't that bad. It’s not the same, or the first. That doesn’t mean it sucks. As a Philly transplant with a Valley upbringing, trust me.

"It's two different worlds," Matey said. "You can experience both of them."