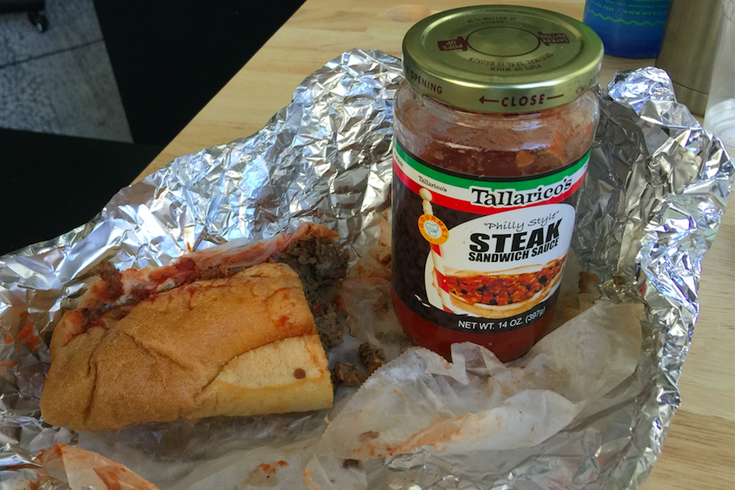 “BREAKING: People from Allentown are under the impression that people in Philly routinely smother their cheesesteaks in red gravy,” it read.

Me being me, I immediately took umbrage to the thought of outsiders doing something differently to a Philadelphia food staple than what Philadelphians do to that food staple.

I was not alone.

Briggs’s tweet got some traction, but pro and con. The bubble-world soon came to realize that some who walk among us vociferously defend a “Lehigh Valley cheesesteak” featuring sauce where Philadelphians think sauce should not be. (See here, here, here, and here for background.)

I set aside my initial inclination to write a pickles or Diner en Blanc-style takedown. We’re living in perilous times that warrant a little self-restraint and kindness extended towards others.

Instead, I reached out to the good people at Tallarico’s so they could explain how this sauce came to be.

This was the grown-up way to go about posting on the Internet.

Chris Tallarico is the vice president of Tallarico Foods, a family business with roots dating back six decades and beyond.

Back in the 1920s – according to the history page on the company’s website – Jenny and Pasquale Tallarico opened a corner grocery store in Bethlehem, Lehigh County.

Their four children – including Chris’ father Jim – helped out.

When duty called (Jim) to the Korean War, he responded with his food service and chef skills, serving as a Sergeant in charge of the kitchen and mess hall at a makeshift base in Korea.

Back home, Jim noticed a change in the buying habits of store customers – they were asking more frequently for items to be packaged in containers for easy pickup.

Jim saw that store customers wanted to recreate the sandwich sensation at home, but lacked a readily available sauce to use.

As Chris explains it, one grocery store expanded to several locations where “my father, uncle and grandfather would cut steak to order.”

Granted, this is early on in the Cheesesteak Narrative.

While some places now use rib-eye for cheesesteaks, back then in the Lehigh Valley, they used a leaner meat “without much fat.” But the fat’s where the flavor’s at. Something had to give.

Jim asked his mother – “a great cook,” Chris fondly recalls – if she could concoct a good steak sauce to make up for that flavor differential.

Customers did not want ketchup and spaghetti sauce, so she developed a unique recipe that’s now available in eight states along the eastern seaboard.

Meanwhile, Tallarico-land locals have since grown accustomed to sauce on their cheesesteaks. (Please see Daniel Craig’s inferior counter-point post for more on that.)

Their product line, with jarred products starting in 1957, has expanded beyond the Lehigh Valley to the point where you can procure the steak sauce locally at supermarkets including Redner’s and Wegman’s (near the ketchup or A1) and Giant (near the deli).

He also shared a vignette about when he traveled to Arkansas to sell Walmart on the product. Namely, he brought all the ingredients and fixings for a cheesesteak, cooked some up on the spot and was told “this was the first time anybody has come in and actually prepared” meals at a pitch meeting.

You gotta respect his hustle.

Tallarico noted that they have 16 total products including chopped cherry-red peppers which people have tried to replicate. He also noted that the company still abides by an approach dating back to 1957: Price the product for regular use, and use quality ingredients with less sugar and salt.

This is a good business approach. But this story is about cheesesteaks, and Tallarico had some measured words about the differences between geographical servings.

“As you know, a lot of people in Philly like their cheesesteaks with Wiz,” Chris said during a Monday afternoon interview. “In this area, we’ve become used to sauce because of what our family started 60 years ago.

“We have people who use it as their secret sauce. … No, we haven’t gotten a lot of blowback from (cheesesteak purists in Philadelphia.)”

That came as a surprise, the lack of blowback. I decided to ask some cheesesteak purists for their take on serving cheesesteaks with sauce.

On Tuesday afternoon, I talked to Tony Luke Jr. He told me that he’d never heard of the sauce. He wasn’t being mean. It’s just eluded his attention over the years.

We spoke about condiments and cheesesteaks, and Luke noted that he doesn’t have a beef with people who use ketchup, mayo or mustard on their cheesesteaks if they really love those condiments. It’s just not for him.

“The cheesesteak is no longer a Philadelphia phenomenon." -- Chris Tallarico

He did have one gripe, though.

“Where I have a problem is when people use sauce on their steaks to get more flavoring,” he said. “If you need sauce to make your cheesesteak better, you should go somewhere else to get a cheesesteak.

It’s worth pointing out that Tony Luke uses ribeye instead of the flavorless steaks of Lehigh Valley in the 1950s and beyond.

As for cheesesteaks themselves, Chris Tallarico offered a statement that might rub some in Philadelphia the wrong way.

“They say, ‘We sell A1.’ Well, this isn’t a steak sauce or A1. It’s for a cheesesteak. Nine times out of 10, when I bring all the fixings for a steak sandwich and cook it up with our sauce, they love it.”

As previously mentioned, I picked up a couple jars of Tallarico’s steak sauce at a Philly-area supermarket on the way to work Tuesday.

Two jars rang in at two cents less than $6 – a bargain.

At lunch time, I headed across the street to Mohammad’s food truck near 15th and Walnut streets and he agreed to cook two steaks with the sauce. It went both in the meat and on the roll.

My verdict? You know, it wasn’t necessarily bad.

Sure, it tasted like a cheesesteak with sauce that would really spruce up a sausage and peppers sandwich, but it was acceptably edible. (Co-workers agreed that “it was OK.”)

Now, I wouldn’t eat cheesesteaks with sauce regularly, but I wouldn’t be opposed to having one every once in a Wiz-free moon at, like, 1 a.m. in South Philly.

The moral of the story: Taste before you judge.