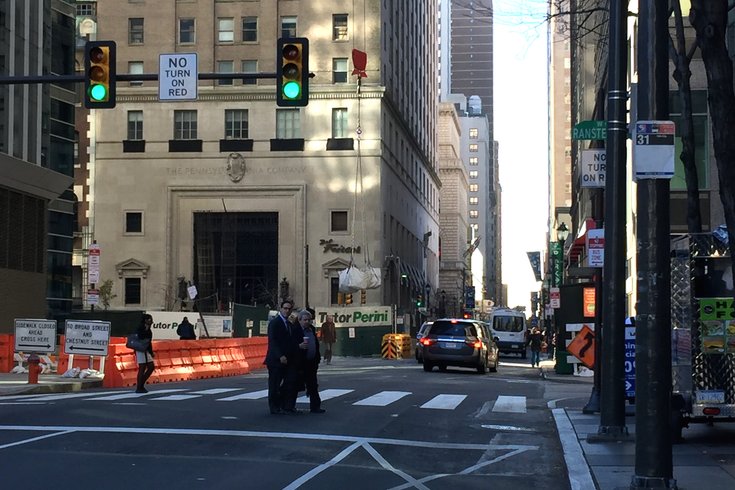 Even pedestrians don't seem to like the traffic light at South 15th and Ranstead Streets in Center City.

I just got to the office in Center City on Friday morning, and I’m pissed off big time.

Maybe it’s just because the days-old flu shot left me feeling woozy. Maybe I'm still all election-season ragey. Who knows. There is a target of my derision on this day, though, and I must vent. Sorry in advance. If you want to get off this crazy train, now is your final chance to do so.

It is the dumbest traffic light in the city of Philadelphia.

It forces cars into crosswalks and intersections at nearby corners. Boxes are blocked because of this traffic light, and we all know that motorists should NOT block the box.

It is markedly worse than the fancy new-ish pedestrian-crossing zone in the middle of the 1700 block of Arch Street – right behind the Comcast Tower. That’s really saying something.

The city should do away with this horrible traffic light or – if we’re going to talk compromise – at least leave it as a flashing red during morning and afternoon rush hours. Sure, there are similar crosswalks on the northeast and northwest corners of City Hall, but the southeast corner does just fine without one.

I know what you’re thinking, people who use that crosswalk. “But Hickey, that whole hotel project has the sidewalk blocked off on the eastern side between Ranstead and Chestnut.” Or, “I really need my La Colombe without having to add 10 additional minutes of walking time.”

To which I say fair points, both. That sidewalk jawn really detracts from the Philly-walkability boosters, huh? (Hey City Hall, whattadaya say we ensure that pedestrians aren't forced to walk three blocks to do what a half-block stroll could do, k?) 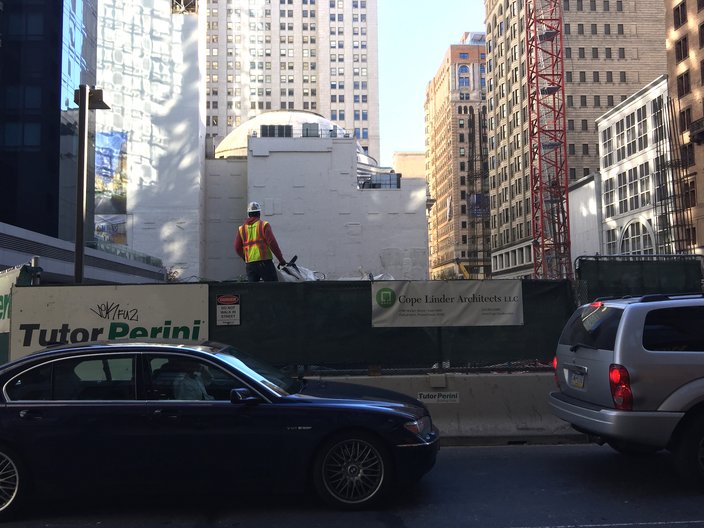 The construction project at South 15th and Chestnut Streets in Center City has rendered the sidewalk there impassable.

I am not a traffic engineer – and I didn’t bother to call any before writing this because I’m too pissed off to talk in a civil manner – but it seems logical that this light does nothing but bolster the Traffic Engineer/Industrial Complex.

(No, seriously, let me know in the comments or via email. I'm genuinely curious and also need reassurance that this post isn't my Col. Kurtz moment.)

Also, don’t interpret this as me being on the side of the motorists in the never-ending motorists vs. bicyclists and pedestrians battle.

I will always side with bicyclists and pedestrians over motorists, even if the focus of today’s rant has everything to do with driving into Center City when I could have just taken Regional Rail and walked a few blocks from Suburban Station.

I am quite in favor of pedestrian safety at all costs, but that mid-block light, man, it got to me today.

Thank you for your time.