When should my daughter get STD testing and why is it important? 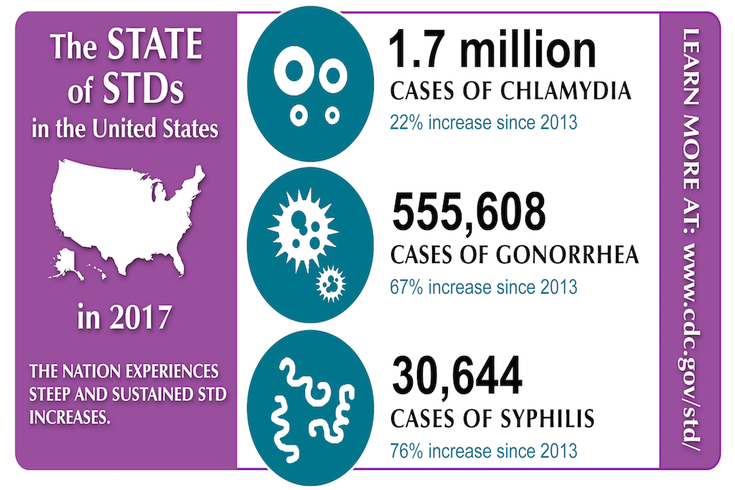 National statistics on STDs from the Centers for Disease Control and Prevention.

The Youth Risk Behavior Surveillance System monitors health-related behaviors among youth and young adults, summarizing survey results from 39 states and 21 large urban school districts. The results from 2017 demonstrate by the time adolescent females reach their senior year of high school, about 56 percent will have engaged in sexual intercourse. Additionally, among sexually active students, only 54 percent reported that they or their partner had used a condom the last time they had sex.

Hopefully, teens share with their parent/guardian when they are sexually active and seek medical care with a pediatric and adolescent gynecologist, pediatrician, or family medicine doctor, to discuss contraception and sexually transmitted disease (STD) testing. But adolescents often don’t feel comfortable sharing this information and therefore it is helpful to encourage teens to have confidential time with their physician when seeking routine care.

MORE FROM DR. POLIS: How to prepare your daughter for her first menstrual cycle

According to the Centers for Disease Control and Prevention, all sexually active adolescents should be tested for gonorrhea and chlamydia every year. STD testing is important because the CDC reports that nearly half of all new sexually transmitted infections (STIs) in the country occur in young people between 15 to 24 years of age. Additionally, the study, “Prevalence of Sexually Transmitted Infections Among Female Adolescents Aged 14 to 19 in the United States,” by Sara E. Forhan and colleagues, identified one in four sexually active adolescent females has a sexually transmitted infection such as chlamydia.

Testing for chlamydia in all sexually active adolescents is particularly essential because girls infected with chlamydia most commonly do not have any symptoms. Girls who are symptomatic might experience bleeding between menstrual cycles, vaginal bleeding after sex, burning during urination, vaginal discharge, abdominal pain or painful sex. It is important that chlamydia is treated early to prevent more serious infections such as pelvic inflammatory disease (PID). If left untreated, PID spreads to the uterus and fallopian tubes and can cause permanent damage to the reproductive system. Chlamydia is a leading cause of PID and female infertility worldwide.

Most girls do not have symptoms from gonorrhea. Girls who have symptoms might have vaginal discharge, pain with sex, pain in the abdomen or pelvis, irregular menstrual cycles, a burning sensation with urination, joint swelling, a rash, or sore throat (if gonorrhea occurs in the throat). Gonorrhea can cause serious health problems if untreated. Like chlamydia, it can cause PID. There is also a risk of gonorrhea entering the blood stream and causing fevers, rash, and arthritis of the joints. 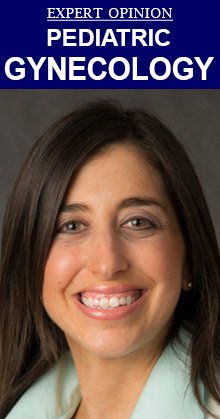 Testing for chlamydia and gonorrhea in adolescent females can be obtained from urine, the vagina or cervix. An adolescent might be asked to collect urine in a cup or place a small cotton swab in the vagina to obtain a sample. If the test is positive, it is easy to treat and is curable with antibiotics. It is imperative that both sexual partners are treated to prevent re-infection. Both partners need to be treated and wait seven days after completion of medication before engaging in sexual relations again. Adolescents should be made aware that despite being treated in the past they can still get infected if they have unprotected sex with a partner who has not been treated, or with someone new who has chlamydia or gonorrhea.

To avoid sexually transmitted infections, adolescents should be encouraged to abstain from sex. Adolescents choosing to be sexually active should be taught to use male or female condoms and dental dams (a barrier used during oral sex) every time they are sexually active to reduce the risk of STD infections. Additionally, encouraging adolescents to be in long-term mutually monogamous relationships is recommended.

Dr. Rachael L. Polis is a pediatric and adolescent gynecologist at Crozer-Keystone Health System. She sees patients from newborn to 25 years old at Crozer-Keystone OB/GYN offices in Broomall, Media and Upland. Call 610-619-8300 for an appointment.