Who are the best players on each local sports team (according to #PhillyRank)? 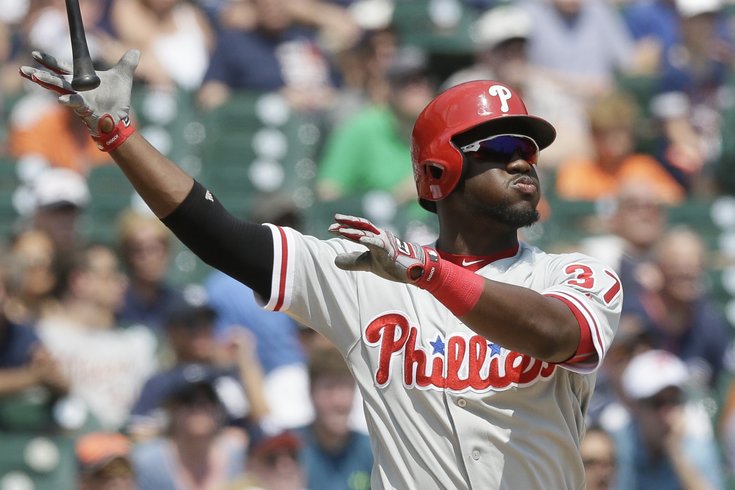 Outfielder Odubel Herrera is the only Phillies player in the #PhillyRank Top 10.

Earlier on Thursday, we unveiled our second edition of #PhillyRank, in which we try to determine the 25 best current athletes in Philadelphia sports.

If you missed it, you should definitely take a look at that before continuing.

To a certain extent, the point of this whole exercise is to start a debate. The list is subjective. We know we're not right -- heck, we didn't even think the so-called "experts" we asked for help were 100 percent correct after reading their team-specific lists.

So, in an effort to help you criticize our rankings even further, we decided to publish the individual team rankings from Jimmy Kempski (Eagles), Ryan Lawrence (Phillies), Charlie O'Connor of BroadStreetHockey.com (Flyers), and Kevin Kinkead (Union). We've also included our Sixers list, which Rich Hofmann put together.

First, let's take a look at the Eagles and Phillies (the green number is a player's overall #PhillyRank): 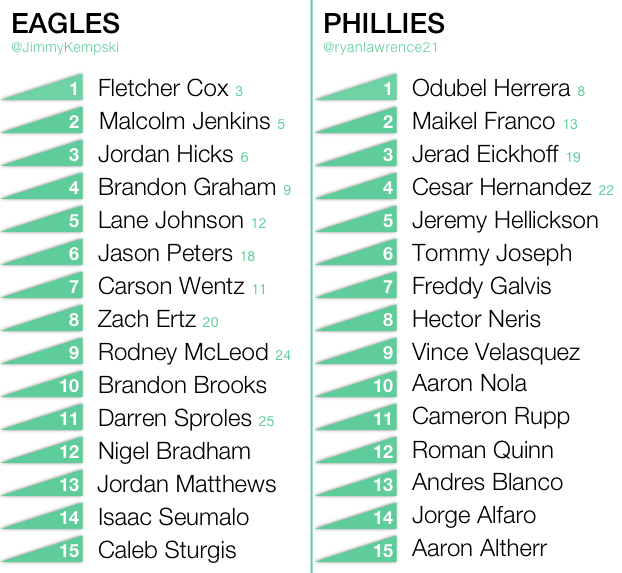 No. 13 Jordan Matthews: He was 13th OVERALL back in July. He had a down year, and finished second in receiving yards and receptions to tight end Zach Ertz. If the Eagles can get a legit No. 1 wideout, the person likely to benefit most (aside from Carson Wentz) is Matthews. Right now, he's all they have and constantly draws tough matchups, so a stud on the outside would open things up for him over the middle ... assuming he can hand on to the ball.

Carson Wentz: Jimmy had Wentz rated as the seventh-best Eagles players, but given the limitations around him and the fact that he was a rookie -- with a rookie head coach to boot -- we felt that was a little low for a player we believe has as bright of a future as pretty much any athlete in the city. We decided to move him above his two tackles, but kept him outside the Top 10 as we feel there's still plenty of room for the young quarterback to grow.

Darren Sproles vs. Brandon Brooks: Nothing against Brooks here, as we think he can be a solid lineman for the Birds moving forward. But there's also a decent chance this is Sproles last opportunity to crack the #PhillyRank Top 25. We're not big on lifetime achievement awards, but Sproles was one of the Eagles best offensive weapons last season, so this isn't quite that.

No. 10 Aaron Nola: He was 16th overall in July, but a tough second half that ended with him being shut down due to a sore elbow, the young righty fell off #PhillyRank more quickly than we expected.

We didn't: At least not when it comes to the players who made the final list. We felt like Jeremy Hellickson was a little high on the list, but that was about it.

Now, the other three Philly teams included in our rankings: 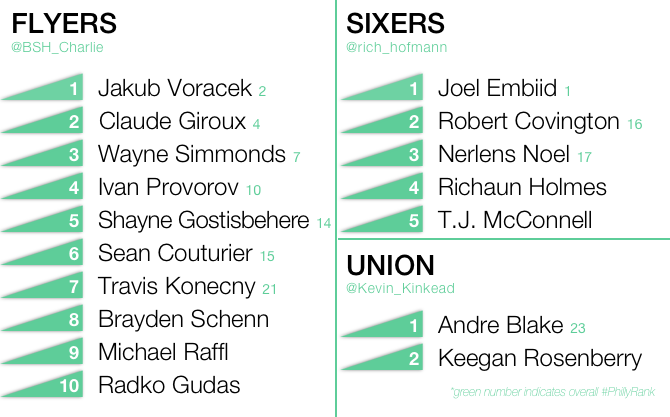 No goalies in the Top 10: Last year, both Steve Mason (14) and Michal Neuvirth (24) had a spot in #PhillyRank. Neither has played well this season but, at least in the case of Mason, we thought an overall body of work would keep them both from falling off entirely. As it turns out, neither was even close to making it this time around.

We didn't: However, some people may take offense to the captain no longer being the top-ranked Flyers player on this list. We're not those people; we agreed with Voracek at No. 1. Also, we nearly decided to put Sean Couturier ahead of Shayne Gostisbehere. But given that they wound up 14th and 15th overall, the difference was more or less negligible.

No Jahlil Okafor: Last year, he was ranked 17th overall, two spots behind Nerlens Noel. It's not a huge shock, given what's transpired over the last few months. But if you told us back in July that Okafor would be completely off the list by the time we updated #PhillyRank, we would've bet it was because the second-year center was traded.

Covington over Noel: Personally, I would've given the edge to Noel. Sure, his numbers are down, but that's due to fewer minutes playing behind Joel Embiid. That being said, Covington's defense has been huge for the Sixers, and Rich was so bullish on Rock being the team's second-best player right now that he convinced me. And, like Couturier and Ghost, they landed right next to each on the overall list. At that point, we're more or less splitting hairs, so I'll defer to our resident basketball expert.

I've got nothing ... other than to say that there's a good chance this is the last #PhillyRank with just one Union player on the list. If Keegan Rosenberry can follow up his strong rookie season with another in 2017, it'll be nearly impossible to justify keeping him off.