2016 MLB Draft: Who will Phillies take with top pick? 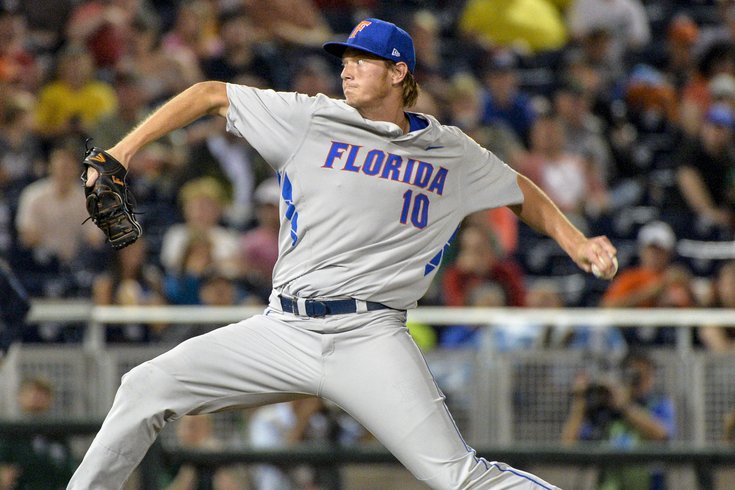 Florida left-hander A.J. Puk, a candidate to go to the Phillies with the No.1 overall pick in tonight's MLB draft, has struggled with consistency this season. The Phils could opt to take a high school position player instead.

You could certainly make a valid argument that the most important date on the Phillies schedule during the 2016 season arrives one month from today.

Major League Baseball’s draft gets underway at 7 p.m. on Thursday, June 9, from MLB Network’s studios in Secaucus, N.J. For just the second time in franchise history, the Phillies hold the No.1 overall pick.

The Phillies have performed well with their most recent first-round picks, acquiring J.P. Crawford (16th overall, 2013), Aaron Nola (7th, 2014), and Cornelius Randolph (10th, 2015) in the last three years. But there’s a different kind of pressure when you hold the No.1 pick, and hitting on that selection could be as important as any other decision the front office makes during their current rebuild.

So just who will the Phillies select and hope to put alongside Crawford, Nola, Randolph, Vince Velasquez, and Maikel Franco (among others) in the core of their next winning team?

Will they make the popular pick and choose the high school pitcher from Jersey?

Is there a chance they could take a hitter?

The two names you’ve probably heard most often are linked together for a few reasons: Jason Groome (Barnegat High School, Barnegat, N.J.) and A.J. Puk (University of Florida) are both left-handed pitchers with fastballs that can climb into the upper 90s and overall talent that projects toward landing at the top of a major-league rotation someday. They are both expected to be chosen among the top five picks next month, and, naturally, they’ve both been linked to the Phillies.

Groome is the more popular name locally, which shouldn’t come off as surprising: he’s local. He plays his home games 60 miles east of Citizens Bank Park (and will take the mound just across the river in Camden a week from tonight against Gloucester Catholic).

Groome is talented, obviously, but don’t be a victim of location bias and assume just because he’s the player you’ve read about the most, he’s the best player in the country.

Groome could be just that – both ESPN.com  and MLB.com had him rated as the top draft prospect in their latest rankings.

But three people who cover the draft regularly all have the Phillies currently in line to draft the collegiate Puk over the prep Groome next month. MLB.com writers Jonathan Mayo and Jim Callis and Baseball America editor John Manuel all have Puk to the Phillies in their latest mock drafts.

“It’s probably too early to really know for sure, but I think that Puk was a guy they were hoping would separate himself from everybody else heading into the year,” Mayo said on Monday. “He hadn’t really done that the first part of the year. But with 20 strikeouts in his last 12 2/3 innings (entering the weekend), that’s the kind of dominant pitcher they were hoping (to see). If he does that more or less for the rest of the year, then I think it becomes kind of an easy choice for them.”

This weekend, Puk’s recent run of dominance got off the track a bit in a 5-2 loss at Tennessee when he walked six and struck out six in 3 1/3 innings. So, maybe not so easy of a choice.

But when you’re charged with forecasting how a draft will play out, it’s usually safe to avoid putting a high school pitcher at 1-1 (baseball jargon for first round, first pick).

Only three high school pitchers have gone first overall in the first 50 years of the MLB draft: David Clyde (1973), Brien Taylor (1991), and Brady Aiken (2014). Clyde was rushed to the big leagues and had a very uninspiring five years in the majors, Taylor barely advanced beyond Class A and was injured in a fight, and Aiken is already with his second organization after failing to sign as the No.1 overall pick after medical issues came about.

Perhaps the Astros should have taken the best college lefty that year, N.C. State’s Carlos Rodon, who went third overall and is now in the Chicago White Sox rotation, instead of the fellow left-handed Aiken. There’s risk in any pick in any draft, but there’s more with pitchers in general and in high schoolers, regardless of position.

It brings to mind a point Hall of Fame executive Pat Gillick relayed at the general managers meetings two years ago, regarding the Cole Hamels (a pitcher drafted out of high school, coincidentally) trade rumors. When you’re considering trade returns, it’s a lot easier to project how a Double-A or Triple-A player might perform in the big leagues than it is with a kid in rookie ball or Low-A.

Consider the Cy Young Award winners in the last five years. Clayton Kershaw was drafted out of high school (7th overall, 2006). The other seven pitchers to win the award since 2011 – Jake Arrieta, Dallas Keuchel, Corey Kluber, David Price, Max Scherzer, R.A. Dickey and Justin Verlander – were drafted out of college.

This isn’t to say Puk stands a better chance of being a more productive pro pitcher than Groome. But you could certainly see where a team would feel more comfortable in taking a 21-year-old pitching in the SEC over a 17-year-old high school kid from New Jersey.

“Puk’s pure stuff is top of the rotation kind of stuff,” Mayo said. “You could claim that Groome has more ceiling. I don’t want to say he’s more polished, but he’s thrown three average-to-plus pitches. But, the risk of taking a high school pitcher is considerable.”

Here’s another thing you should know before you dive any deeper into doing homework on the 2016 draft: there is no Ken Griffey Jr., Alex Rodriguez, Stephen Strasburg or Bryce Harper here. There isn’t a clear-cut consensus No.1 pick (as the above mock draft vs. talent rankings illustrate).

And just because the top half of the first round feels pitcher-heavy (Kansas prep right-hander Riley Pint and Mississippi State right-hander Dakota Hudson are also possible top-five picks) doesn’t necessarily mean the Phillies will automatically be taking a pitcher at 1-1.

The odds-on favorite to be the first position player drafted next month is Mercer University outfielder Kyle Lewis, who entered Monday hitting .432 with 17 home runs and an .801 slugging percentage in 48 games.

Would it surprise everyone for the Phillies to forget Groome and Puk and pick a guy like Lewis?

“I don’t think it would be that huge of a surprise,” Mayo said. “He’s going to go in the top three to four picks.”

The comp many have made for Lewis is current Cubs outfielder Jason Heyward (at least how many viewed Heyward when he was a can’t-miss, five-tool prospect).

“(Lewis) is from a smaller school, but he hit in the (wooden bat) Cape (Cod League),” Mayo said. “He’s putting up just video game numbers this year. He has some tools. … College hitters are much more of a sure thing than anything else.”

To wit, let’s circle back to the aforementioned 2014 draft, when a high school left-hander (Aiken) and a college left-hander (Rodon) were among the top three picks. Also drafted in the top 10 picks that June: Nola and two college bats, Indiana’s Kyle Schwarber (fourth overall) and Oregon State’s Michael Conforto (10th overall), who were impact bats on playoffs teams nearly upon arrival to the big leagues a year later.

Another player who went in the first half of the first round, N.C. State’s Trea Turner (13th overall), arrived in the big league late last summer with the Washington Nationals and is making a case for a promotion again (hitting .321 with a .391 OBP at Triple-A Syracuse) this year.

This year, beyond Lewis, Louisville outfielder Corey Ray and Tennessee third baseman Nick Senzel (who homered off Puk on Saturday) are two other collegiate bats that could get drafted in the first five picks next month.

The fact that there is not a consensus top pick could actually work out OK for the Phillies. Sure, it’d be helpful to plug a Bryce Harper into your farm system, but the Houston Astros (who failed in the Aiken pick, and also didn’t recoup on 1-1 value with Mark Appel in 2013) have done pretty well twice in spreading their bonus pool over the first few rounds, rather than on one pick, in recent years.

Last season, when they had two of the first five picks as compensation for failing to sign Aiken, the Astros got LSU infielder Alex Bregman with the second-overall pick, Florida high school outfielder Kyle Tucker with the fifth pick, and then Daz Cameron, a five-tool high school outfielder and son of former MLB player Mike Cameron, with the 37th pick. Cameron, represented by Scott Boras, tumbled out of the first round because of signability issues.

But the Astros signed Cameron for $4 million, almost $2.4 million more than the MLB recommended slot bonus for the 37th pick, to get him into their system. 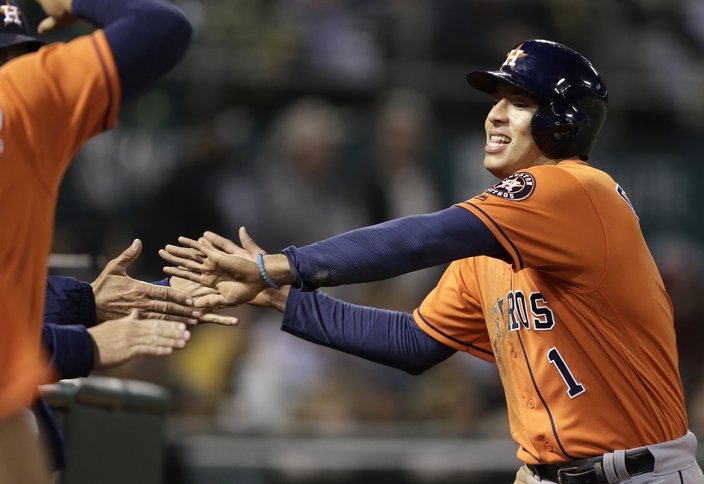 Four years ago, the Astros selected Carlos Correa with the first overall pick, even though he wasn't projected to go first. They were able to sign him under slot value and it enabled them to spend more later in the draft, when they also nabbed pitcher Lance McCullers.


In “reaching” for Correa and manipulating their dollars wisely, the Astros were then able to draft and sign pitcher Lance McCullers with the 41st overall pick above slot value ($2.5 million) and third baseman Rio Ruiz in the fourth round ($1.88 million).

Next month, the Phillies have a draft bonus pool just under $13.5 million; the No.1 overall pick comes with a value of $9.015 million.

Since there isn’t a Harper-type in next month's draft, no one player will command that $9.015 million. So by taking that $9 million and combining it with the $1,536,200 million recommended slot value of their second-round pick (42nd overall), the Phils may do well in getting two elite talents for the price of one, once-in-a-generation superstar.

“Whoever they take, they’re are going to be quote-unquote making a deal so they can use it,” Mayo said. “I think the Phillies – you can look at the whole draft – but particularly with those first two picks, they look at it as having $10.5 million for two guys.”

Or, for three guys.

An example: the Phillies could take Lewis with the No.1 overall selection next month, sign him for $5.5 million, and then have another $5 million to spread out over their next two picks (second round, 41st overall and third round, 78th overall), which is more than twice the combined value of the recommended slot value of those picks.

And no, not every team can play the game as well as the team that holds the first-overall pick. The slot value of the No.1 pick (again, $9.015 million) is, for example, more than twice the amount of the No.5 pick ($4.38 million).

“Suddenly you have $5.5 million to spread out or go aggressively after someone who falls,” Mayo said.

Like the Astros did with Daz Cameron last year. Or as they worked the Carlos Correa draft.

Even though there isn't any, one, obvious, consensus choice, the Phillies can't miss on 1-1 if they hope to hurry their rebuild along. But the good news for the front office is they’ll be able to play the draft better than any other team next month, which should result in further stocking an already-revamped farm system.