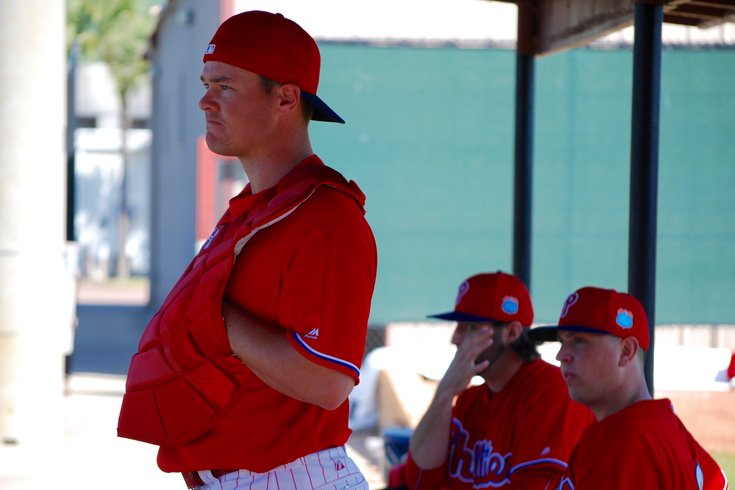 Andrew Knapp established himself as one of the better hitting prospects in the Phillies farm system last summer, but is still fine-tuning his defensive skills at Triple-A Lehigh Valley.

ALLENTOWN – With the exception of the very best prospects like a Bryce Harper, Carlos Correa or Mike Trout, – and even they’re not always immune – the progression of a young player often involves enduring a few speed bumps on the road to proving they’re worthy of a big-league promotion. Since some join major-league organizations out of high school instead of college, or from another country, the progressions of each individual player differ, and can’t always be compared by age or years as a pro.

Andrew Knapp is one of two highly regarded catching prospects in the upper levels of the Phillies minor league system. The 24-year-old was a second-round pick (one round after J.P. Crawford) in the 2013 draft out of Cal-Berkeley.

Knapp’s bat broke out in a big way last summer: he hit .360 with 11 home runs, 21 doubles, and a .419 OBP in 55 games following a promotion to Double-A Reading. But his defense behind the plate is still a work in progress.

Ten days ago, Knapp hit a go-ahead home run in the fourth inning of a game against Scranton Wilkes-Barre. Then, in the 10th inning, he allowed the game-winning run to score on a passed ball.

Since that night, Knapp has gone 2-for-20 without an extra-base hit and with four strikeouts and two walks in his six games.

But if Knapp wants to beat Jorge Alfaro to the big leagues, which shouldn’t be difficult since Alfaro, out with an ankle injury for most of 2015, has missed the last three weeks with an oblique injury at Double-A, he’ll need to be a more consistent at a position where the defense is more important than the offense.

Knapp entered play Friday at Triple-A Lehigh Valley with four errors and five passed balls in 18 games with the ‘Pigs this season. He’s also thrown out just two of the 13 players who have attempted stolen bases against him.

“He works at it harder than anyone,” Brundage said. “It’s what he’s doing every day. He’s working to better himself behind the plate. We’ve asked a lot of him, to come here to Triple-A. Like a lot of young catchers, it’s a lot to ask. Control a staff, and manage a staff, throw runners out, call the ball game and, oh yeah, that’s right, on top of that it’s your turn to hit. It’s a lot. The game is a little bit quicker here and even quicker at the major-league level. It’s good experience for him. Do I like to see him struggle? Probably not but at the same time, that’s also part of the game.”

With Alfaro, who turns 23 next month, also in the system and Cameron Rupp currently holding his own at the big league level, it will be interesting to see if the Phils decide to begin experiment with Knapp at first base or the outfield. Boston Red Sox prospect Blake Swihart recently began playing left field after being demoted from the big leagues to Triple-A Pawtucket.

But it’s been just one bad month for Knapp, so perhaps that’s premature thinking.

If it feels like Tommy Joseph has been around forever, it’s probably because he has been one of the most notable names in the Phillies farm system for nearly four years, since he arrived in the July 2012 trade that sent Hunter Pence to the San Francisco Giants.

But Joseph doesn’t turn 25 until July. And after struggling with injuries ever since his arrival into the Phillies organization, most notably a series of concussions, Joseph has re-established himself as a premier hitting prospect that’s suddenly on the cusp of the big leagues.

Joseph entered play Friday hitting .353 (second in the International League) with a 1.028 OPS (first in the IL) in 20 games. Only two players in the league have more home runs than Joseph, who has five in 68 at-bats.

Needless to say, it’s been a fun first month of the season for Joseph, who was uncertain where his career was headed seven months ago, when he was one of three prominent players in the organization, along with former All-Star Domonic Brown and former top pick Kelly Dugan, outrighted off the Phillies 40-man roster. Unlike the other two, however, Joseph hadn’t accumulated enough minor league seasons to become a free agent.

“If I didn’t have an opportunity to come back with these guys, I don’t know where I’m at,” Joseph said. “Nobody is going to want a 24-year-old guy with head issues that hit a .180 last year [Editor’s note: He actually hit .193 in 45 games]. It’s great for them to give me the opportunity to play again.”

A former catcher that’s transitioned into a full-time first baseman since the beginning of last year, Joseph should have a better chance of staying healthy. He hasn’t played more than 58 games in a season since arriving into the Phillies organization.

If he stays both healthy and productive, Joseph could be a candidate to trade places with Darin Ruf (hitting .149 with two doubles in 25 games with the Phillies) as the right-handed half of a platoon with Ryan Howard in the big leagues.

“You don’t want to think about it,” Joseph said. “I do my best to focus on the task at hand and playing the games here, but, I’m a player that’s obviously never had the call. That’s what I’m working toward. That's what I want to happen, for sure (it’d be great). But I try to stay here, in the moment.”

MINOR BITS: Could Nick Williams be close to a big league promotion? His .299 OBP and plate discipline (18 strikeouts, four walks) in 21 games aren’t appealing and are evidence that he needs more time to develop. But it is a little interesting that he’s made four of his last five starts at Triple-A Lehigh Valley in left field after playing all three positions somewhat regularly in his first 16 games (five in center, five in left, four in right). The Phillies appear to be comfortable with Peter Bourjos in right field because of the defense he brings nightly (and despite of his struggling bat). But the Phils have had five different players make starts in left field in their first 29 games. … Mark Appel’s tidy 3.00 ERA after five starts at Triple-A may look nice, but the former No.1 overall pick is continuing to have some of the same issues he had as a struggling prospect in the Houston Astros system, too. After walking four batters in five innings of a 10-1 loss to Scranton on Thursday, Appel has a 4.3 walk rate (walks per nine innings), which is the seventh highest among starters with at least four games in the International League. … Cornelius Randolph, the No.10-overall pick in last June’s draft, has been sidelined with the last three weeks with a back injury. The 18-year-old Randolph is hitting .240 with a home run, two doubles, four walks and 13 strikeouts in 12 games at Low-A Lakewood.