Scientists at NOAA and the Bureau of Ocean Energy Management continue to study the situation, but all agree it is unrelated to offshore wind power projects 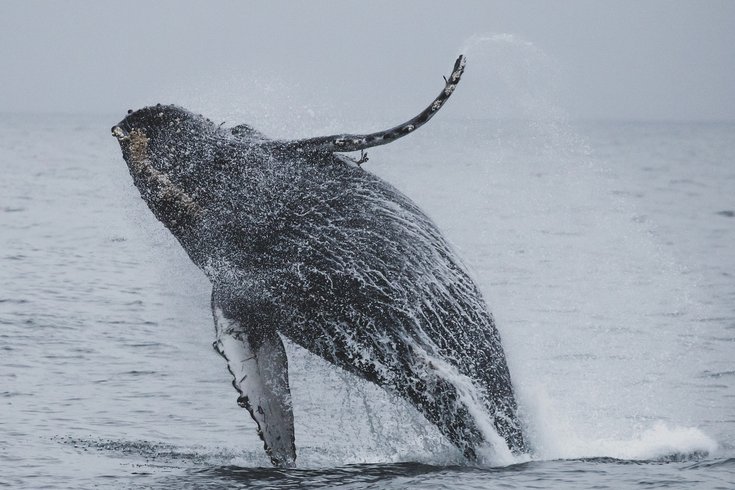 Humpback whales have been dying with increasing frequency. Since December, the remains of five animals have washed ashore in New Jersey. But the trend began in 2016 and NOAA and BOEM scientists say the deaths are not linked to offshore wind power projects.

Recent spottings of dead humpback whales in Strathmere, Atlantic City and Brigantine have concerned residents asking questions — chief among them, why are so many whales dying?

In a media briefing Wednesday, scientists from National Oceanic and Atmospheric Association and the Bureau of Ocean Management stressed that the cause is not wind farm development, a claim that's gained traction among citizen groups and Republican lawmakers, who blame projects from PSEG and Danish energy company Ørsted for ongoing testing ahead of planned construction.

"I just want to be unambiguous," Benjamin Lewis, deputy chief for the permits and conservation division of the NOAA Fisheries Office of Protected Resources, said. "There is no information that would support any suggestion that any of the equipment that's being used in support of wind development for the site characterization surveys could directly lead to the death of a whale."

NOAA has been closely studying humpback whales since January 2016, when a rise in deaths led the group to declare an "unusual mortality event" for the species along the East Coast. A UME requires special scrutiny from a team of independent scientists, who analyze samples from the dead whales and make recommendations based on their findings.

While that research is still underway, NOAA and BOEM do have some clear ideas of what is and isn't behind the rise in humpback deaths. Using information from their scientists and websites, we answered a few common questions below:

NOAA, BOEM and many other environmental groups have been unequivocal on this point: no. Recent claims linking whale deaths to wind farms have no supporting evidence, officials said, and the humpback mortality problem predates recent renewable power development, since the UME goes back to 2016.

Why are so many humpbacks dying?

There's no one answer, but scientists have found evidence of a ship collision or entanglement in 40% of the humpback deaths studied under the UME. That evidence includes wounds and bruising, which officials from the Marine Mammal Stranding Center noted on the past two humpback strandings in Brigantine and Atlantic City, as well as an earlier incident in Stathmere.

Since a whale can wander pretty far from the offending vessel by the time scientists find the animal, it's often hard to trace the death back to a particular ship, scientists said. It is also rare to get both a report of a vessel strike and a nearby carcass associated with the collision, making conclusive linking nearly impossible.

What's more, NOAA has only been able to study about half of the reported humpback strandings along the East Coast since 2016. In some cases, the whale is too decomposed to examine, while in others, it's floating too far away to access.

Why are there more collisions with whales and ships?

For one, there are more humpbacks. After being decimated by the whaling industry in the 19th and early 20th centuries, humpbacks have made a remarkable recovery, growing from a population low of 10,000 to 15,000 to roughly 80,000 today.

Their presence in the Mid-Atlantic region has also increased. A study last summer from Rutgers and nearly two dozen other organizations found that humpback whales were spending extended periods of time off the coasts of New Jersey and New York, which could increase their exposure to ship activity.

"These whales may be following their prey, which we're hearing from our partners in the region are reportedly close to shore," Lauren Gaches, director of public affairs for NOAA Fisheries, said. "We know that our climate is changing, and one of those key changes is the warming of our ocean. In response to this, we're seeing populations of many marine species adapting and moving into new areas where conditions are more favorable."

What kind of work is currently underway with the wind projects?

NOAA has authorized two projects in New Jersey by the Danish power company Ørsted, the first of which, Ocean Wind Power 1, is still years away from installing wind mills. That means no actual construction has begun, but the company is conducting CPT sampling, a soil test that involves pressing a metal rod into the ocean floor. The most recent sampling was conducted with the vessel Regulus between Jan. 4 and Jan. 10, company officials told The Associated Press. Another vessel, NorthStar Voyager, will pick up testing in the coming days.

"The way that most of these surveys work is they would have one of these pieces of equipment that's emitting sound paired with a receiver," Erica Staaterman, a bioacoustician for BOEM's Center for Marine Acoustics, explained. "And so from the vessel they would be towing the instrument along in sort of a zigzag fashion around the area that they're trying to sample. And they would be looking for the reflection of that sound wave off of the sea floor, back on the receiver. And that's how they get essentially an image of what's on the sea floor or just below the sea floor."

The acoustic systems being used in current testing are "commonly used around the world," Lewis continued, noting that "there are no historical stranding events that have been associated with the use of systems like these."

Staaterman also noted that the equipment used in offshore wind surveys is vastly different from the sound sources used by the oil and gas industry. "Those in oil and gas are called seismic air guns, and they're specifically designed to penetrate kilometers into the sea floor," she said. "So they're very high energy, very loud sources."

"The ones that are used here are called high-resolution geophysical sources, and they're typically smaller, in the amount of acoustic energy they put into the water column, but also ... many of them are used for very short periods of time with a long quiet time in between. That means that they're only on for several milliseconds and then for about 15 seconds would be quiet."

In theory, yes, but NOAA and BOEM have strict protocols in place to avoid collisions on their approved projects.

"We do have measures in place to reduce the likelihood of vessel strikes," Brian Hooker, biology team lead for BOEM's Office for Renewable Energy Programs, said. "Such as reduced speeds in times when animals are present to maintaining vigilant watch on deck at all times to ensure that these vessels are not interacting with marine mammals. And we do have a pretty rigorous reporting requirement for all of these vessels so that if they do have any interaction with a protected species, they report that immediately to us. And that goes for construction and operations, as well as these pre-construction surveys."

Before any energy project can proceed, it needs to send detailed plans to NOAA for approval. Part of this process involves something called an "incidental take authorization." According to NOAA's website, a "take" is defined under the Marine Mammal Protection Act as "to harass, hunt, capture, collect or kill or attempt to harass, hunt, capture or kill any marine mammal."

That language can sound pretty alarming, like the group is authorizing which companies can kill whales, but according to the scientists on Wednesday's briefing, the projects currently in development are only authorized for very low-level "takes."

"Incidental means that it is not something that is purposeful, right?" Lewis continued. "So we know that whether it be construction, acoustic surveys, that sort of thing, when you have an activity that's putting noise into the environment, you might have the potential or the unintended consequence of effects to marine mammals. So that is incidental takes ... It is not the purpose of the activity."

"What I can tell you is that for all of the incidental take authorizations that have been issued associated with site characterization survey, the only form of take that is anticipated and that has been authorized is level B harassment, behavioral disturbance. So no injury and certainly no mortality. Mortality cannot be authorized through the incidental harassment authorizations that we're doing for these surveys."

What can we do to help the whales?

Report any stranded whales to NOAA immediately, so scientists can continue to study their causes of death. If you spot a humpback, maintain a safe distance of 100 yards, or roughly a football field, and call (866) 755-6622.