'Will there be a streaker?' and other interesting World Series prop bets 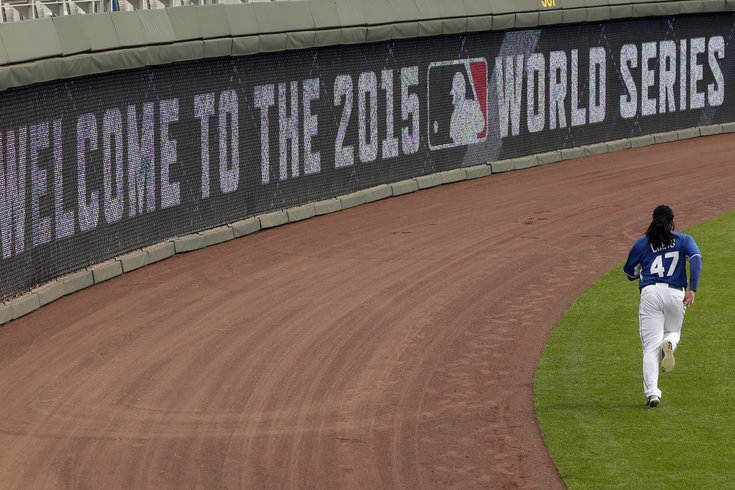 What will happen once the 2015 World Series gets underway on Tuesday night is anyone's guess. But if you work for a Vegas sportsbook, you often have to think beyond the game itself and try to set a line on something no one is quite expecting to see.

Like, for example, whether or not there will be a streaker. Arriving by parachute.

That's what the people at MyTopSportsbooks.com did, and although you can't actually place any bets there -- they're more of an information site for gamblers -- that doesn't make their list of Word Series odds and prop bets any less interesting.

First, let's take a look at some of the normal, boring, standard odds that don't involve naked men flying through the air.

Odds to win the World Series:

Odds the World Series is won in...

Over/under on stolen bases for...

Over/under on sacrifice bunts for...

Over/under on home runs for...

And here's a pair of over/unders that will leave everyone watching praying for the under.

Over/under on the number of...

• Calls challenged by managers in the series: 3

• Odds a home run breaks the fountain at Kauffman Stadium: 600/1

Those scenarios aren't as far-fetched as you may think, especially considering Travis d'Arnaud belted one off the big apple in the NLCS. I don't know how hard it is to actually "break" it, but you've got to figure Daniel Murphy will have at least one ball hit out towards it every game.

• Odds a player or manager gets ejected during a World Series game: 22/1

• Odds there is a brawl with at least one punch thrown during the World Series: 99/1

As long as Chase Utley -- or a similar play -- doesn't make an appearance, I think the punch is one you stay away from.

And now for the really good stuff...

• Odds a fan runs onto the field during the World Series: 9/1

• Odds a fan streaks the field during the World Series: 100/1

• Odds a fan parachutes into the stadium during the World Series: 2000/1

Think this one is out there? Well it happened during the first inning of Game 6 of the 1986 World Series.

And we all know what happened at the end of that game. Maybe a brave Mets fan will try this again for good luck, although I'm not sure flying over a stadium during a World Series game without permission is the best idea, let alone in post-9/11 New York.

If I was able to find a book willing to take action on this, then laid $1,000 on it, and went out and did this myself, would the money I won be enough to cover my legal fees?

• Over/under on the number of Fox promos for non-sports Fox television shows: 20.5

Over. You always take the over on this.

• Over/under on the number of times the broadcast cuts to shots of fans in costume on Halloween: 8.5

Considering Game 4 is actually on Halloween night, they may get close to that number during that broadcast alone.

• Over/under on the number of times Fox shows the NYC skyline during World Series broadcasts: 9.5

There are (potentially) three games at Citi Field, meaning they would need to average just three shots per game. Over all the way.

And now, for some history...

• Over/under on the number of times the Mets’ 1986 championship is referenced during World Series broadcasts: 13.5

• Over/under on the number of times the name “Buckner” is mentioned during World Series broadcasts: 4.5

• Over/under on the number of celebrity sightings during the World Series: 15

And, of course, we saved the best for last...

• Odds there is another “moment” with Rob Manfred/Erin Andrews during trophy presentation: 500/1

If you're not sure what this is in reference to, it's this awkward moment from the 2015 All-Star Game trophy presentation.

You can check out more from MyTopSportsbooks.com, here.