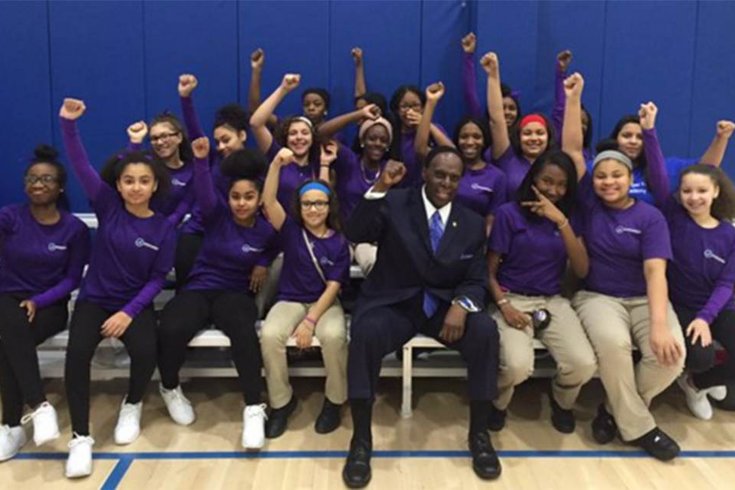 Camden County Sheriff Gilbert L. 'Whip" Wilson is surrounded by students at the KIPP Cooper Norcross Academy in Camden at Wednesday's dedication of a new gymnasium, which will bear the names of Wilson and his younger brother, Carlton "Muscles" Wilson. The Wilsons are longtime pillars of the Camden community.

Gilbert L. "Whip" Wilson is a well-established public figure in Camden, having entered the city's political arena after a 26-year law enforcement career.

His younger brother, Carlton "Muscles" Wilson also has made a considerable impact on their community, having tutored countless youth as a longtime basketball and football coach. For years, Whip Wilson says, Muscles has been an "unsung hero."

That's no longer the case.

KIPP Cooper Norcross Academy honored the Wilson brothers on Wednesday by dedicating a new facility in their names – the Gilbert L. and Carlton E. Wilson Gymnasium. But Muscles was unable to attend, having fallen ill.

"To have something like this forever, with your name on it, that's a big deal," said Whip Wilson, who was elected Camden County sheriff in November. "To have a plaque that big – folks who don't know who (Muscles) is can read about him and say, 'Wow, that guy was something else.'"

Both Whip, 68, and Muscles, 60, pictured left, are lifelong residents of Camden's Lanning Square neighborhood. Muscles was a student in the former Lanning Square School's first graduating class. That school once sat at the site of the KIPP Cooper Norcross Academy campus, which was completed in 2015.

Both brothers began their careers by serving in the U.S. Air Force and spent time coaching athletics together. Whip Wilson entered the Camden police force, ascending to lieutenant while becoming known for his community policing efforts. He served two stints on Camden City Council before being appointed to the General Assembly.

Muscles Wilson spent more than 30 years working security for the Camden Board of Education, but is best known for his service on the sidelines.

"Everybody says it but I truly mean it – the greatest dad ever. His main thing for us was to instill responsibility at an early age. He always made us pursue our own dreams – do want you want to do." – Asante Wilson, 34, Camden firefighter

He won more than 10 basketball championships coaching both Morgan Village Middle School and the Centerville Simbas, a youth league team. He also served as an assistant coach for the Camden High School's varsity basketball and freshman football teams.

"If they played ball in the city, my dad coached them at some point in their life," said Asante Wilson, who accepted the honor on Muscles' behalf.

At home, Muscles and his wife steered their six children toward education. Together, their children own seven collegiate degrees – with an eighth on the way.

"Everybody says it but I truly mean it – the greatest dad ever," said Asante Wilson, 34, a Camden firefighter. "His main thing for us was to instill responsibility at an early age. He always made us pursue our own dreams – do want you want to do."

Family members, friends and others from the community lingered afterward in celebration.

"They were always there to help you. This is their life. I can't pick out one thing." – Joseph Perno, praising the brothers' dedication

Joseph Perno, an 85-year-old Lanning Square resident who lives one block from Whip Wilson, praised the brothers' dedication, saying they are readily available anytime someone has a question or a need.

"They were always there to help you," Perno said. "This is their life. I can't pick out one thing."

Ron "Itchy" Smith, the Wilson brothers' cousin, said their commitment to Lanning Square is a product of the era in which they grew up.

"It was family-oriented," Smith said. "Everybody shared everything. It was as simple as that."

On Wednesday, the community shared the joy of recognizing them.

"For us to be honored like this is just unbelievable," said Whip Wilson, who shares six children with his wife, Martha. "I feel so unworthy for this honor – I'll take it though. It's a blessing."