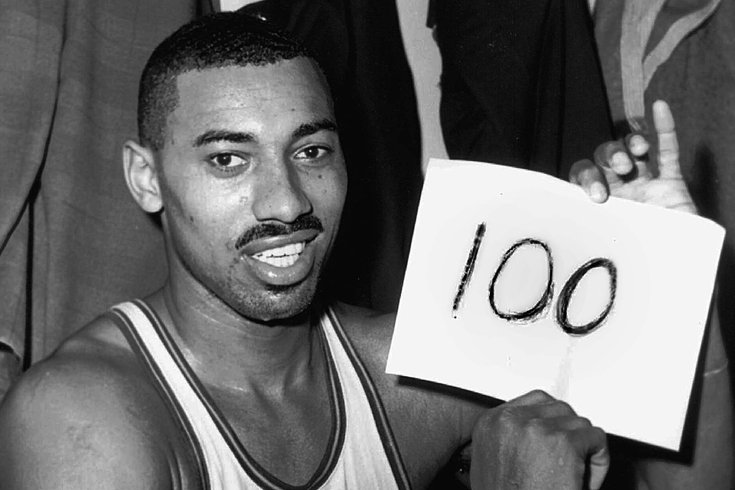 Harvey Pollack was the one who scribbled "100" on the paper Wilt is holding up.

A late-game recording of Philadelphia 76ers legend Wilt Chamberlain's record-setting 100-point performance in 1962 will soon have a place in the Library of Congress after the game's fourth quarter broadcast was chosen among 25 new entries to the national collection.

Despite the sharp-shooting turn of the NBA, nobody has managed to depose Chamberlain from the throne he claimed on March 2, 1962 – not Kobe Bryant (81), not Elgin Baylor or David Robinson (71) and not even Michael Jordan (69). Most people recall the famous picture of Wilt the Stilt holding a up piece of paper with "100" scrawled on it, but now the Library of Congress has recognized the jubilant radio call in the final frame.

If not for a college kid waking up to listen to it, the recording might have been lost to history. From the Library of Congress announcement:

The game, played in Hershey, Pennsylvania, was not covered by television; it was only broadcast by a Philadelphia radio station. University student Jim Trelease, who had fallen asleep listening to the game, awoke to the news that the station would be replaying part of the game in the early morning. Trelease decided to record the rebroadcast. In 1990, Trelease learned that the Hershey Community Archives did not have a copy of the broadcast. Fortunately, Trelease still had his copy and donated it to the HCA, which later gave a copy to the NBA. In 1988, the NBA had acquired a copy of the fourth quarter of the game from Warriors fan Samuel B. Marcus, who had recorded the Warriors' possessions on a Dictaphone. League archivist Todd Caso had both recordings cleaned up and combined to make the best possible version from the two sources.

Each year, the Library of Congress selects 25 new recordings under the terms of the National Recording Preservation Act of 2000, which calls for a board to select "culturally, historically, or aesthetically significant" aural documents that are at least ten years old.

"These recordings, by a wide range of artists in many genres of music and in spoken word, will be preserved for future listeners," said Acting Librarian of Congress David S. Mao. "This collection of blues, jazz, rock, country and classical recordings, interspersed with important recordings of sporting events, speeches, radio shows and comedy, helps safeguard the record of what we've done and who we are."

Listen to the radio broadcast of Chamberlain's historic feat below.