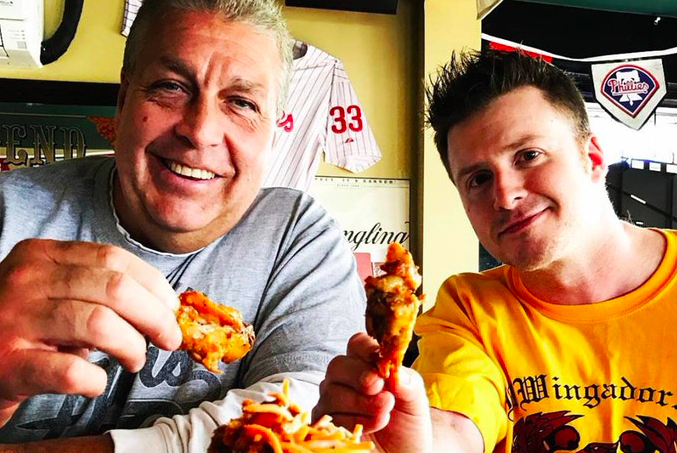 Wing Bowl luminary and ex-convict Bill "El Wingador" Simmons is a free man — and he wants to start a new chicken restaurant franchise in the Delaware Valley.

What he needs is a nest egg.

The 55-year-old Woodbury Heights native rose to local fame for his dynastic run at Sportsradio 94WIP's annual wing-eating competition, capturing five titles (and downing thousands of wings) during a blaze of glory between 1999 and 2005.

But Simmons, a former high school football player, fell on hard times in the aftermath of his heyday as a competitive eater. An attempt to launch a reality TV show, "America's Biggest Eater," failed to take off after he was indicted in 2013 for possession, manufacturing and distribution of cocaine.

He served two years of a seven-year sentence was released from prison in 2015, briefly rejoining Wing Bowl as a co-commentator alongside host Angelo Cataldi. A memoir published last fall, "Snow on the Barb Wire," recounts Simmons' brushes with death in prison and his road to accepting responsibility for the damage he brought to himself and his family.

"My passion to put this concept together came when I was locked up," Simmons told PhillyVoice. "I'm always about food. I had a restaurant before and my tail wags when I'm at any supermarket. I've got an A-team on board that's believing in what's on the table."

The dream is "El Wingador: Serious Fricken Chicken," a fast-casual restaurant concept that would incorporate his classic hot sauces with wings, mac n' cheese, salads and El Ringador onion rings, among other comfort foods and desserts.

Simmons has joined forces with longtime business partner and memoir co-writer Joe Vallee to promote the new restaurant with a $25,000 Kickstarter campaign. Their team is also backed by Bob Silzle, who brought 29 Five Guys Burgers & Fries to the tri-state area.

They're thinking big but starting small, with an initial restaurant targeted for Springfield, Delaware County, or in Cherry Hill.

"We ultimately plan to open 30-35 units a couple of years down the line," Vallee said. "They would each be about 1,000-1,500 square feet with 15 to 30 seats. We're leaning toward shopping centers as first. There will be El Wingador memorabilia, a light, bright dining space, chicken art, self-ordering kiosks."

Pulling together the financial support for a second chance, especially one of this magnitude, is no easy feat. Simmons doesn't deny that. He believes people will recognize his passion and drive for this restaurant.

"It's tough coming back but it can be done. I want to be living proof of that," Simmons said. "There's no giving up in me. It doesn't matter if I'm not on the top of the chicken wing world. The easiest thing to do is give up, but I've never known anyone who's been happy doing that. The key is being progressive. I'm always going to keep moving forward and be okay."

If he can pull this off, Simmons said he wants to address other people who are trying to pick themselves up again, whether it's having a discussion or offering a job.

Contributions can be made to the campaign at any level, though rewards are offered for serious backers at $400 or more.

"I ask you to have faith in me," Simmons wrote on his Kickstarter. "I promise you that you will keep coming back, and your family will share fond memories of El Wingador restaurants for years to come."