Wings and a prayer: El Wingador’s long road to redemption 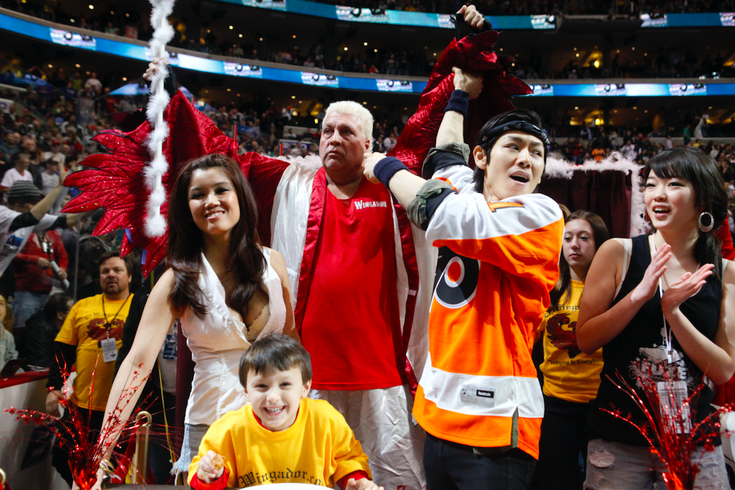 Bill Simmons, also known as “El Wingador,” has lived one of the more colorful lives of anyone in the Philadelphia area.

A man whose many careers have included food entrepreneur and truck driver, the 6 ft. 5 in. Simmons rose to fame as the five-time champion of the annual Philadelphia bacchanal known as Wing Bowl, which he parlayed into a line of chicken wing sauces and a variety of TV appearances.

But Simmons has also made headlines for less positive reasons – he was convicted in 2013 of dealing cocaine, and did around a year and a half in prison. Now free, the 55-year-old Simmons is out with a new memoir, Snow on the Barb Wire, co-written with local sportswriter Joe Vallee.

The 150-page book is full of amusing eating stories, but also goes to some dark places. Simmons speaks candidly about his entire life story, from the streets of Philadelphia to the Wing Bowl stage – to Hollywood – to his stint in New Jersey state prison. He’s not shy about owning up to his own failures, whether it’s the actual crimes, or his missteps as a husband and father. 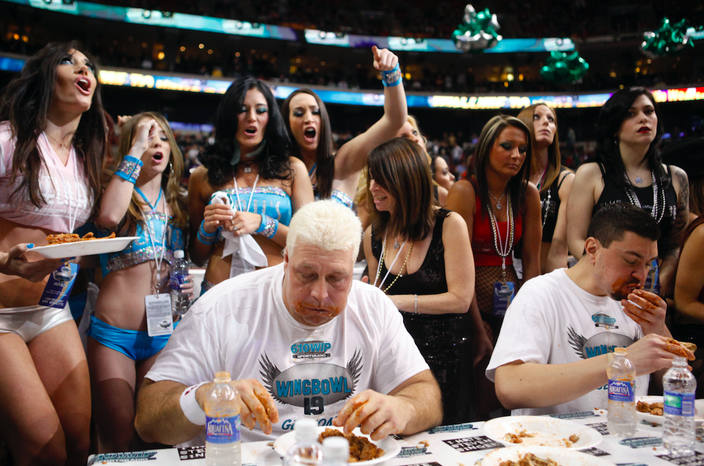 Born in Philadelphia and raised in South Jersey, Simmons was always a big eater, although he didn’t get involved with Wing Bowl or the competitive eating world until he was in his late 30s, mostly going up against much younger competitors.


“I just love food – my tail was always wagging when I walked into the supermarket,” he said.

“And I love challenges. I don’t like to lose, and I love to eat, so I put those two together. So, it was actually pretty easy.”

As the eating competition’s first breakout star, Simmons enjoyed a brief run as a national celebrity, flying out to Los Angeles for TV tapings, appearing on various reality and competition shows, and even sitting for a mini-documentary for The New York Times by Oscar-winning filmmaker Errol Morris.

But after the 2008 recession hit and Simmons’ attempt to open a restaurant went belly-up, the former eating champ says he turned to drug-dealing to make ends meet.

“I kind of just made a bad choice to make some money,” he said.

Not long after, he was arrested and sentenced to seven years. The book details the prison story, full of violent fights and other indignities. He began working on the book in jail and put it together with Vallee upon his release.

“I just wanted to tell my story – I didn’t want anyone feeling sorry for me, but I just wanted people to know why I did what I did,” Simmons said.

“There are a lot of people out there just trying to survive.”

Another goal, with the book, was to warn people not to make the same choices he did. It also provides a lot of insight into the internal politics of Wing Bowl (WIP morning show host, Wing Bowl announcer and Philly Voice contributor Angelo Cataldi wrote the forward.) Simmons takes the opportunity to settle some scores with old Wing Bowl opponents, while also noting that his national fame helped grow the event.

One thing made clear is that, for all the times in local sports discourse that the phrase “blue collar” is thrown around to describe Philadelphia athletes who are paid millions, it’s worth remembering that most of the competitors in Wing Bowl are actual, blue-collar people, taking time off from actual, working-class professions.

There’s also a lot in the book about Simmons’ annual pre-Wing Bowl training regimen, which consisted of superhuman amounts of caloric intake. He would ingest 15 pounds of food a day and 10 pounds of Tootsie Rolls a week, which he used to strengthen his jaw. What did his doctors think of such activities? 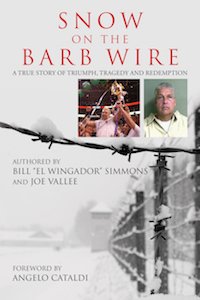 The cover of Snow on the Barb Wire.

“My doctor just said, ‘this isn’t good for you for a man your age,’” Simmons said, but the doc noted that his blood pressure and cholesterol were fine.

His doctor merely warned him to “be careful.”

What’s next for Wingador? The book is out now, and he and Vallee say it’s gotten some interest from Hollywood (a more gluttonous retelling of "The Wrestler," perhaps?) Meanwhile, Simmons is trying to assemble investors for another run at the restaurant business.

He’ll also be back at Wing Bowl next month for the 25th edition, engaging in an exhibition “wing off” with the defending champion, Molly Schuyler. (Simmons’ championships typically had winning totals in the 100s, while Schuyler and other recent winners have broken 400. Simmons claims the wings these days are smaller than they used to be.

“Wing Bowl’s like an indoor Mardi Gras – it’s something you have to see a least once. I think it’s a good event. I think that it’s more organized now than it was before," he said.

In all, Simmons relishes the opportunity to tell his only-in-Philadelphia story.

“I wish I could tell a different story, but it’s the only one I know.”