Spoiler Alert: 'I want every food in cone shape'

By Bryan Bierman
PhillyVoice Contributor
Bad For You Food 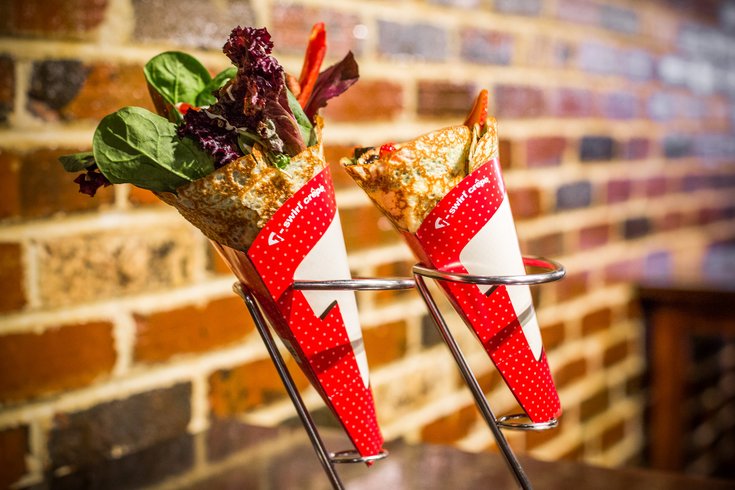 Forget about how good ice cream is for just a second and bask in the genius that is the ice cream cone. Way more than just a vessel for ice cream, the cone adds a whole different element to the treat that a bowl could never replicate.

Just looking at it from a food practicality standpoint, the ice cream cone makes the previously messy dish easier to travel with, while holding all of the melted excess cream at the bottom, near the tip. It also eliminates the need for two hands, as you would usually need with a bowl and spoon. Need to text your grandma but don’t want to put down your Rocky Road? Boom. Have to perform CPR on a ferret but you still have a scoop of Cookie Dough left? Problem solved. 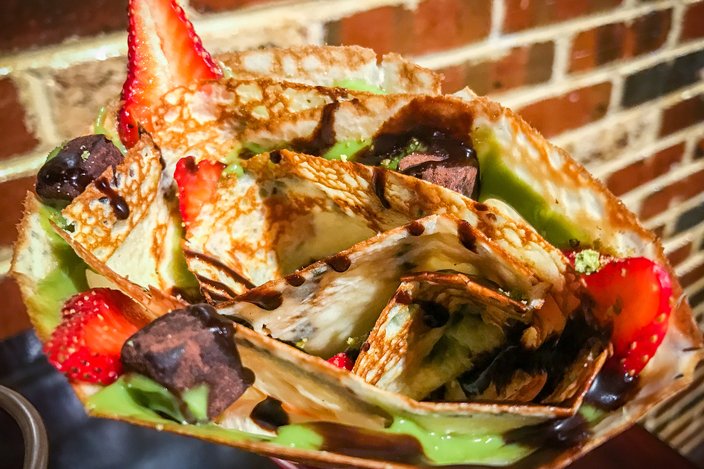 The taste benefit flips the ice cream script completely. When biting into a sugar cone along with the ice cream, there’s a rush of delicious flavors and a unique texture that is one of the best parts about ice cream itself.


T-Swirl Crêpe in Chinatown has taken the cone idea into a completely different direction, using crêpes, the French-originated thin pancake. While crêpes are usually eaten with a fork and knife, T-Swirl Crêpes—a national chain with over a dozen locations and growing—shapes theirs into cones and stuffs them with various fixings.

There are almost two dozen varieties of flavors available, both sweet and savory. I wanted to try one of each, so I picked the oddest sounding flavors. On the savory side, I got the Okinawa Hot Dog, partly because it sounds like a terrible euphemism that we normally couldn’t print. On the sweet side, I tried the Matcha Chocolate Truffles, made with real matcha green tea.

Both crêpes looked excellent. You could see the care into each as they were hand constructed by certified crêpe masters (I assume). Just like an ice cream cone, the actual ingredients inside were well above the rim but not enough that it would fall out everywhere.

The crêpes themselves are made from rice flour and were prepared to a golden brown, slightly crispy, though still having a malleable perfection. Its slight sweetness is a great base for each flavor to work off of.

The Okinawa Hot Dog—made with greens, carrots, onions, corn, red peppers, cheddar cheese, tofu sauce and banana ketchup—was a uniquely tasty meal. I have never eaten banana ketchup before, but its inherent sweetness combined well with the smoky flavor of the Okinawa Hot Dog. The greens and assorted vegetables were great filler. I noticed that there was only a sprinkling of cheese and I surprise even myself by saying no more cheese was necessary. 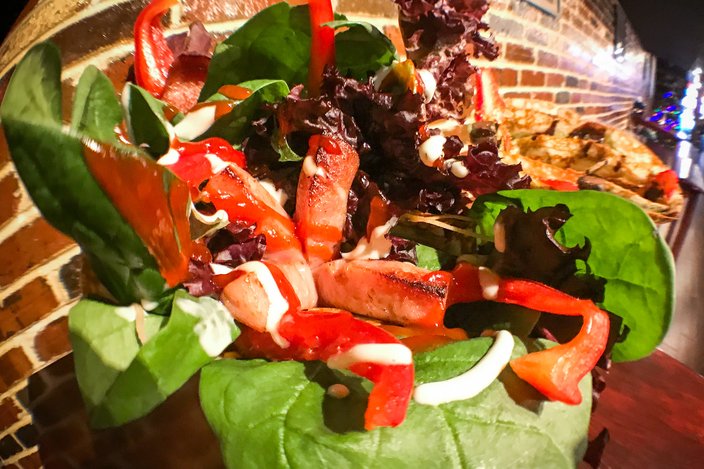 The Okinawa Hot Dog crepe is stuffed with so many veggies it begins to look like a flower bouquet.

For dessert, I had the Matcha Chocolate Truffles, which was an excellent blend of smooth flavors in a way I had never eaten. Made from matcha custard, sliced strawberries, chocolate truffles, whipped yogurt, crushed pistachios and chocolate sauce, this was an interesting, well-blended dish. The huge chocolate truffles explode as you eat them, coating the other ingredients. The hints of tang from the strawberries and the slightly bitter taste of matcha cut through the cone. By the end, as the whipped yogurt and custard cream took shelter below, it tasted like strawberry shortcake, a nice surprise at the end of an already great snack.

As you get farther down the crêpe, the outside cardboard holder can be pulled off for quick access. The crêpe’s integrity and inner structure never wavered, even as the excess ingredients ballooned the very bottom. No mess whatsoever.

Verdict: The crêpes were both fun and slightly wild dishes. I will go back for more flavors. I also want every food in cone shape from now on.

Editorial: Regarding our own Brian Hickey’s recent anti-pickle tirade, I for one stand by pickles. One of my favorite snacks in the world is a real deli pickle. I will eat a whole deli pickle in one sitting if you let me. I will eat them fried or cold. I love them on hamburgers, chicken sandwiches and even occasionally on a cheesesteak.

I sympathize with Mr. Hickey’s plight of being given pickles when you don’t want any. However, he must learn that he is in the minority. I don’t like milk on my cereal so if I want cereal, I will specify that I don’t want milk. I understand that I’m an anomaly.

I also take offense to Mr. Hickey’s suggestion that the Eagles’ drinking of pickle juice did not actually make them a better team. That’s ridiculous. Pickle juice is a magical drink that give you powers, ones that make you better at football. Frankly, the Eagles could have used some pickle juice this season. And of course science can’t prove the claims, they are magic powers, undetectable by modern medical technology and available only to those who believe in the spirit of football.

The real kicker of the piece is this quote: “If people would just let cucumbers be cucumbers – delicious when sliced and put in a glass of water – the world would be a much happier, classier place.”

Cucumbers are mad boring. They are the Drake of the vegetable world. Pickles are like Slayer. Slayer is awesome. Sure, Drake might be classier and happier than Slayer, but I’m still choosing Slayer over Drake every damn time.

There are enough options for everyone. In this season of love, I hope to see pickle-lovers and non-pickle-lovers join together in peace and understanding.

Except for anyone who eats those Bread ‘n Butter Pickles. Those are disgusting.