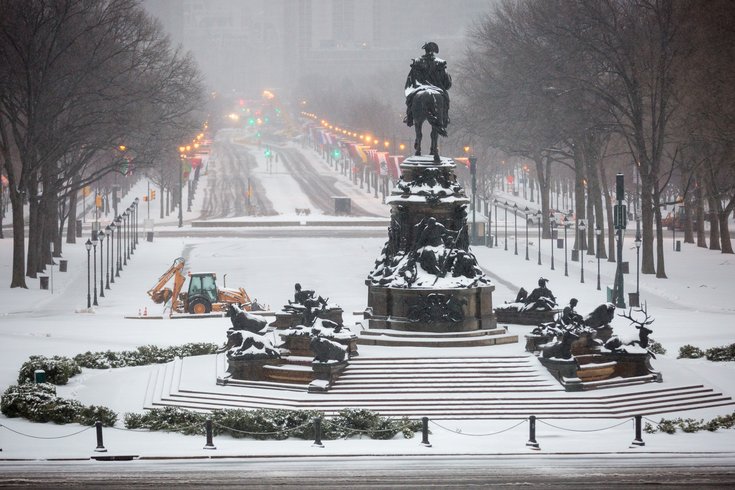 The Benjamin Franklin Parkway on the morning of Tuesday, March 14, 2017.

Winter Storm Stella rolled into the Philadelphia region on Monday night into Tuesday morning, dumping a mixture of snow and sleet onto the area, creating hazardous commuting conditions and forcing the closure of essentially all local municipal offices and schools.

The storm, expected to bring snow accumulations of up to 12 inches in the city and as much as 24 inches in the surrounding suburbs, has been called potentially "life-threatening" by forecasters. Residents in areas north and west of Philadelphia have been advised to "shelter in place" during the nor-easter.

RELATED: Surviving Stella: what you need to know

Around 7 a.m., about 2-3 inches of snow had already piled onto the ground in Center City Philadelphia, and the precipitation had turned into a thick shower of sleet, leaving streets icy and potentially dangerous for drivers.

Early Tuesday, the National Weather Service said the dividing line between snow and a wintry mix had moved farther inland, through southern New Jersey into Philadelphia, cutting anticipated snow totals, but increasing the chance of icing. But parts of the Lehigh Valley and Poconos, north and west of Philadelphia, had whiteout conditions Tuesday due to blowing snow.

Reports on social media indicate the sleet is turning back to snow in many locations, where significant snow accumulation remains likely.

In Eastern Montgomery County, there was just a bit of ice mixing in with the heavy snow in the early morning, as winds gusted and shook trees. Snow totals didn't reach projections. 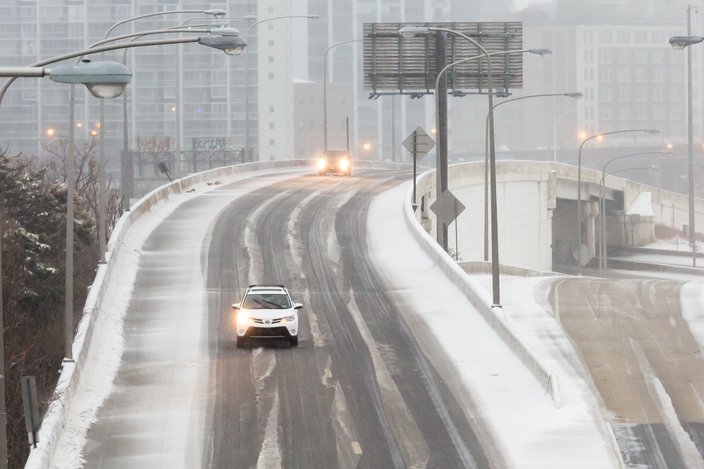 The City of Philadelphia has lifted its snow emergency and its ban on parking on some city streets. At 4 p.m., the Philadelphia Parking Authority enforcement of all parking violations resumes. Discounted parking rates at the PPA's Center City garages end at 4 p.m. as well. Those entering the garage after that time will pay normal rates.

No significant power outages were reported by PECO in the city or surrounding suburbs for much of the day.

In South Jersey, power company PSE&G reported nearly 16,000 customers without electricity as of 12:20 p.m. At the same time, Atlantic City Electric was reporting more than 13,500 customers without power, with most of them in Gloucester and Salem counties. According to social media, the power was out in Wildwood.

In a press conference Tuesday afternoon, SEPTA General Manager Jeff Knueppel said that passengers should expect delays and cancellations on a number of the agency's services for the rest of the day.

Only 34 of SEPTA's 123 bus routes were running as of Tuesday afternoon. Most of the available routes are among SEPTA's "priority" routes, which are classified as buses that travel streets that are usually plowed early and often during snow storms.

These routes also often feed into the Market-Frankford and Broad Street subway lines, which were both running on normal schedules Tuesday.

Knueppel said the goal is to get all bus routes running by Wednesday morning, and that routes will slowly start becoming available again as the storm subsides.

Trolley services are running but with some delays, Knueppel said. The Norristown High Speed Line has been suspended until further notice because of ice on the tracks.

Knueppel encouraged commuters to check SEPTA's website and local media reports for updates as they work to restore full service.

PATCO is running on a modified snow schedule. No suspensions were reported Tuesday morning, but delays of up to 20 minutes were reported.

The Camden County Department of Public Works is clearing 1,400 lane miles of roadways across the county.

“We will continue with this operation throughout the night and all day tomorrow to keep roads passable and inhibit a refreeze tomorrow evening,” said Camden Freeholder Susan Shin Angulo. 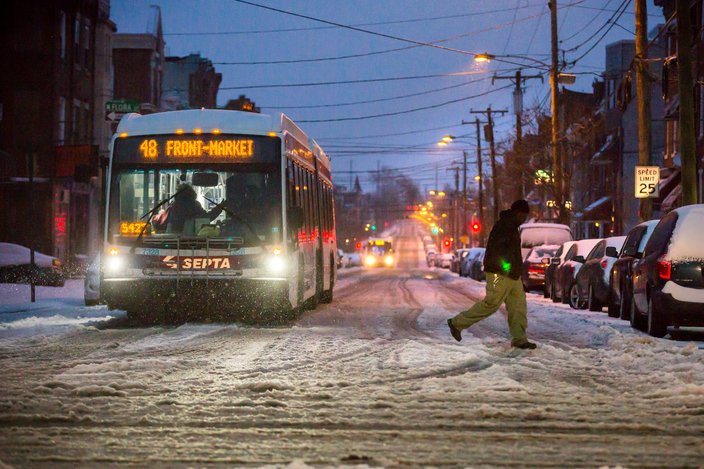 U.S. airlines have scrapped about 5,400 flights. Southwest Airlines, which carries more domestic passengers than any other airline, doesn't expect to operate any flights Tuesday at 14 airports stretching from Washington to Portland, Maine. Southwest canceled about 900 flights, while American Airlines, JetBlue Airways and United Airlines each canceled more than 500.

An additional 650 flights have been canceled for Wednesday, a number that tracking service FlightAware.com expects to rise as the airlines scramble to resume operations.

All Philadelphia archdiocesan and public schools are closed Tuesday. Philadelphia city offices will open at 10 a.m. No trash collection will take place because of the weather.

The Philadelphia Flower Show at the Pennsylvania Convention Center in Center City is open Tuesday and all activities will take place as scheduled. Light crowds were reported early in the day.

The Camden County Freeholder Board has postponed its caucus meeting originally scheduled for Tuesday until Wednesday at 6 p.m. Rutgers University-Camden.

Pennsylvania Gov. Tom Wolf has said that about 700 National Guard members would be deployed, along with more than 2,000 snow plows.

For more information on the storm, check out our guide here.

This story will be updated throughout the day.