Snow day is a great way to admire the tulips

By John Kopp and Kevin Shelly 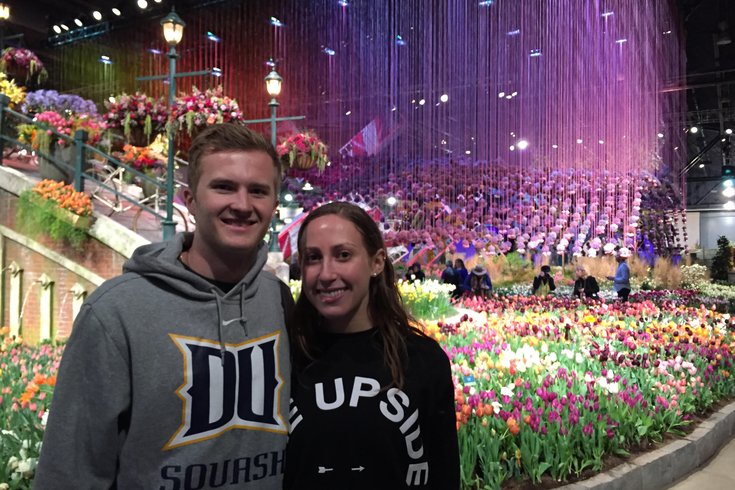 Winter Storm Stella storm delivered an underwhelming amount of snow  the Philadelphia region, but the storm's nasty mixture of sleet and high winds kept most people indoors on Tuesday morning.

The streets, trains and public transit hubs were mostly barren during the morning rush as many people worked from home or took the day off. Schools throughout the region closed, but children mostly remained indoors as sleet pelted the city.

Yet a few people looking for a glimmer of spring braved the elements on their way to the Philadelphia Flower Show in Center City. For some, the journey was more treacherous than others.

"We walked all the way here," said Morgan, of Bryn Mawr, Montgomery County. "It was a trek. It was an interesting experience coming down here."

Like the rest of the city, the annual show was void of crowds as it opened on Tuesday morning. The popular event typically sees thousands of people flood the Pennsylvania Convention Center on each of its nine days.

But for those that came out had plenty of space to admire the beautiful exhibits — and photograph them — without bumping into strangers. 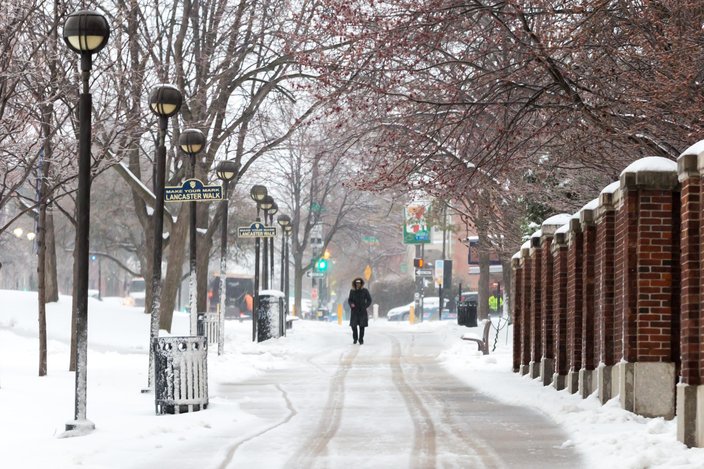 The flower show, which opened Saturday, marks the biggest fundraiser for the Pennsylvania Horticultural Society. In recent years, PHS has pushed the show back until March in hopes of avoiding debilitating snowstorms.

That didn't help this year.

At least 19 tour buses rescheduled trips for later in the week, spokesman Alan Jaffe said. But he hopes that as the storm moves out and road conditions improve, the show will fill up Tuesday afternoon. He anticipates the rest of the week will be even busier than normal.

"We look forward to the support later in the week," Jaffe said. "We appreciate those who are able to get here today and brave the weather. We think we'll recover fast."

For many of those attending Tuesday morning, the lack of crowds was a drawing card.

Janice McLaughlin, of Hi-Nella, Camden County, has been coming to the flower show since 1982. In that time, she's learned that inclement weather discourages people from attending, leaving visitors with the rarity of an uncrowded experience.

So McLaughlin pulled on her snow boots and hopped on a PATCO train. She was happy to step inside the convention center and forget about winter for a few hours.

"Even though we got a taste of spring a few weeks ago," McLaughlin said, "It gets you in the mood for gardening."

Bill Sullivan, 55, and Louis Hartzog, 60, of Frenchtown in Central New Jersey arrived in Philly on Sunday for a brief trip. They originally planned to attend the flower show on Monday, but when they learned that it would remain open during the snowstorm, they decided to take advantage of the crowd-free experience.

"I like the creativity and design," said Sullivan, who does some gardening himself as a property manager. "I'm kind of in the business. I know the science of what it takes to get all of these flowers to bloom at once. I'm always impressed with how it comes together."

To see the thousands of tulips on display, Sullivan said they had to walk six blocks from their hotel through the wintry mix. He described the experience as "the toughest six blocks I ever walked."

"We're looking at it as an adventure," Hartzog added. 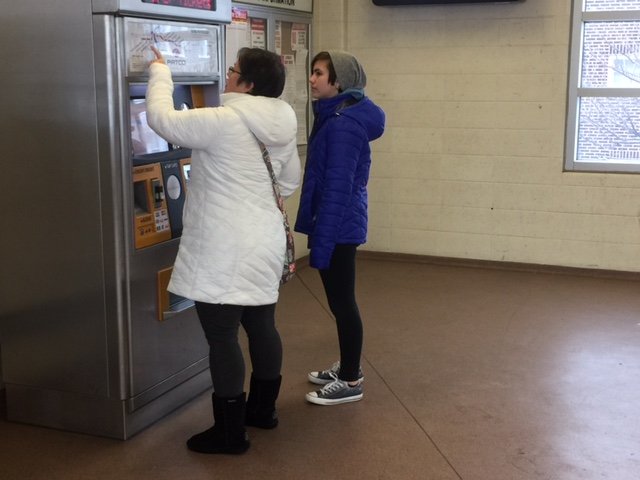 Among the handful of commuters using PATCO on Tuesday during the Winter Storm Stella, many were heading to the Philadelphia Flower Show, like Amy and Emma Evans of Pitman, N.J.

Forecasters had projected that Philadelphia would get 8-to-12 inches of snow. Much of the region received far less, though the mixture of freezing rain and winds made the morning commute a perilous endeavor for many.

Anticipating more snow, many schools announced Monday they would be closed Tuesday.

Amy Evans said her 7th grade daughter, Emma, could easily have gone to school in Pitman, Gloucester County, on Tuesday morning – if only the forecast had been accurate. Instead, they bought tickets for a PATCO ride from Collingswood to Philadelphia, where they planned to take in the flower show.

“Driving was easier than I expected,” Evans said.

Terry and Chuck Hoover, of Collingswood, Camden County, were also taking advantage of the light crowds to head to the show with Stockton University hospitality and tourism student Liz Hoover.

“No one is here,” Terry said in the empty Collingswood train station.

But not everyone had the day off.

Cindi Benner, 41, of Center City, walked to her job as an office manager for an engineering firm. Many of her co-workers, who also live in the city, also made it into the office.

"Obviously, I expected more (snow) than what we had, but it was fine because I live in the city," Benner said inside Suburban Station. "It was no big deal."

Robert Scott, an architect who lives in Center City, but works in New Jersey, was surprised to find himself going to work because the predicted blizzard proved to be a bust.