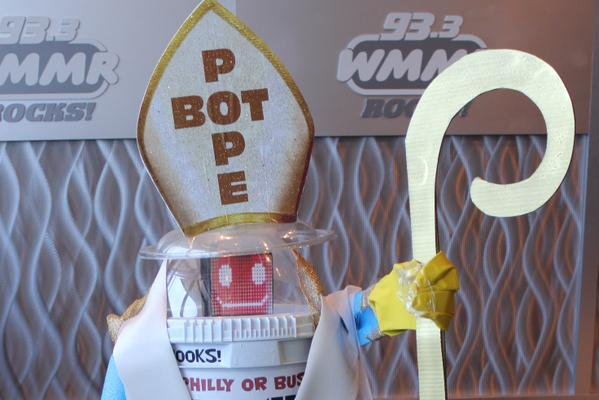 The hitchhiking robot known as hitchBOT may have met its demise in Philadelphia earlier this month, but 93.3 WMMR has created a new robot in anticipation of the pope's visit in September.

Pope Bot, a papal-inspired robot hitchhiker, set off Monday on his journey around the Delaware Valley.

"Hello, I’m Pope Bot," the robot says in its introduction online. "Inspired by my friend, #HitchBot, who sadly met his demise in Philadelphia, I am taking a journey around the Delaware Valley. The goal of my adventure is to prove to the Vatican that this area is a safe environment for the leader of the church. Plus, there is a prize each week for one person who gives me a lift!"

Pope Bot's journey can be followed on social media using #PopeBotPhilly. Hopefully, he will have more luck with the people of Philadelphia than his inspiration, hitchBOT.

Ready for my journey! Let's show the rest of the country how kind (gentle & responsible) we can be. #PopeBotPhilly pic.twitter.com/r5t72Qobph