Police are not investigating the demise of the globetrotting robot 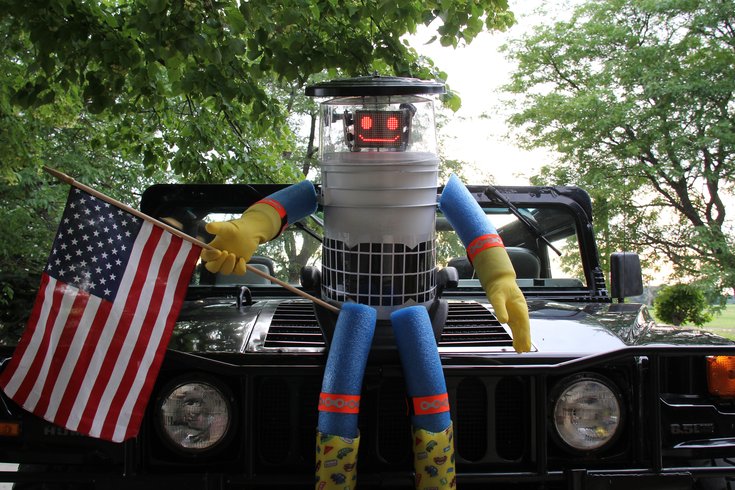 HitchBOT, a globetrotting robot created by Canadian researchers, was destroyed in Philadelphia. The robot was attempting to hitchhike from Massachusetts to San Francisco.

The Philadelphia tech community is attempting to reconstruct hitchBOT, a hitchhiking robot that met its demise in Old City Saturday night.

HitchBOT, the creation of researchers at Canada's Ryerson University, was attempting to complete a bucket list of experiences as it traveled from Marblehead, Massachusetts to San Francisco. After two weeks, the robot's journey abruptly ended in Philadelphia, where it was found damaged beyond repair.

The vandals responsible for destroying hitchBOT — which had more than 43,000 Twitter followers — are not known. Yet, Philadelphia police say they are not launching an investigation because no one has filed a criminal complaint. The robot's creators are not seeking charges.

"We have no interest in pressing charges or finding the people who vandalized hitchBOT," the Ryerson University researchers said in a statement. "We wish to remember the good times and we encourage hitchBOT's friends and fans to do the same."

“Usually, we are concerned with whether we can trust robots. This project asks: can robots trust human beings?” Frauke Zeller, assistant professor in the School of Professional Communication at Ryerson University and one of the project's founders, said in a July 2014 news release announcing a hitchBOT trek across Canada.

Some hitchBOT fans in Philadelphia are trying to reconstruct hitchBOT — and possibly the city's reputation. The destruction of hitchBOT quickly brought up the age-old Santa Claus jokes.

So, #hitchBOT had a successful life until he went to #Philly. Guess he didn't talk to Santa Claus before he got there.

A Kickstarter campaign launched by a Philadelphia-area resident has raised more than $1,600 to rebuild hitchBOT, easily surpassing its $1,200 goal. The robot, which includes a GPS tracking device, reportedly costs about $1,000 to create.

Techies at "The Hactory" in West Philadelphia also are spearheading efforts to rebuild hitchBOT. Executive Director Georgia Gutherie told CBS Philly that she's hoping to get approval from hitchBOT's creators to repair or replace the necessary parts. If not, consider creating another robot to send on its own trip.

"The most expensive part is a tablet or PC," Gutherie told CBS. "So if anyone has one that they're not using that they'd like to donate, or if they'd like to make a small donation so that we could buy one to replace, that would be a big help."

Geekadelphia, a blog covering technology and other "geeky" subjects, also is trying to facilitate hitchBOT's resurrection.

Geekadelphia co-founder Eric Smith said the website used its Twitter feed to encourage the robot's reconstruction. He said it was a "bummer" seeing Philadelphia cast poorly in the media, especially given its robotics community. He said he hopes efforts to rebuilt hitchBOT change that.

"We have this amazing robotics community that is doing all sorts of cool things," Smith told PhillyVoice. "It's such a bummer. Philly is so great. It's not the kind of light that should be shining on us right now."

Despite Philly receiving some negative publicity, Meryl Levitz, president of Visit Philadelphia, doubted hitchBOT's destruction will greatly alter public perception of the city, which is getting set to welcome Pope Francis in late September.

"Of course things like this don’t make Philadelphia look good, but will it make it harder to sell the city? No," Levitz said. "As you know, hitchBOT was a social experiment. We are not happy that his journey ended in Philadelphia but we are happy that there has been an outpouring of support from our tech community and residents.

"hitchBOT’s trip came to an end last night in Philadelphia after having spent a little over two weeks hitchhiking and visiting sites in Boston, Salem, Gloucester, Marblehead, and New York City. Unfortunately, hitchBOT was vandalized overnight in Philadelphia; sometimes bad things happen to good robots.  We know that many of hitchBOT’s fans will be disappointed, but we want them to be assured that this great experiment is not over. For now we will focus on the question 'what can be learned from this?' and explore future adventures for robots and humans."

Before perishing in Philadelphia, hitchBOT took in a Red Sox game at Fenway Park while traveling the Boston area. It previously hitchhiked across Canada and parts of Europe.

The robot relied on strangers to pick it up and carry it to its next destination.

Jesse Wellens, a popular Philadelphia YouTube blogger, picked up the robot Friday night. He dropped it off at Elfreth's Alley. Some time later, hitchBOT was no more.

I thought we were finally getting over the whole Snowball/santa issue, now this.. #hitchBOT @hitchBOT pic.twitter.com/mPPrUHUAO8