Was hitchBOT's destruction part of a publicity stunt? 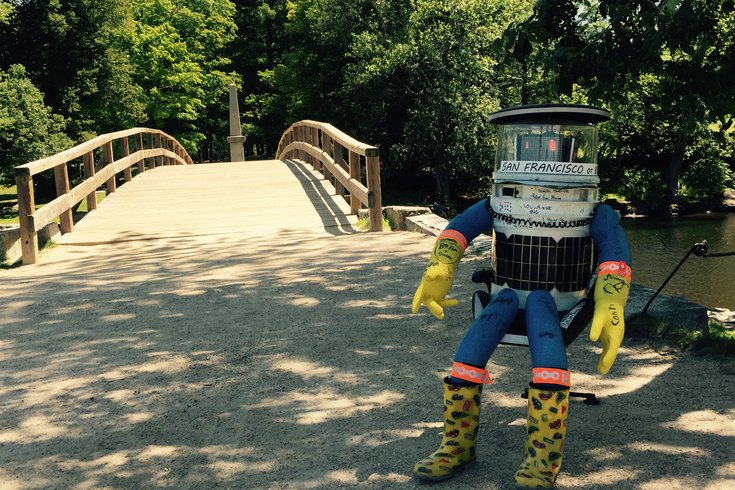 The demise of hitchBOT, a globetrotting robot, might have been part of a prank.

UPDATE: While the prankster has not admitted to the destruction of hitchBOT, evidence continues to mount suggesting that Ed Bassmaster is responsible for the "death" of the hitchhiking robot.

Bassmaster posted a video to Periscope early Tuesday morning as the character "Teste," claiming that the cops were after him for hitchBOT's demise.

HitchBOT might have been the victim of a Philadelphia prank.

The destruction of the globetrotting robot created an internet frenzy Monday, leaving Philadelphia as the punchline to countless jokes about its "brotherly love."

But noted pranksters Ed Bassmaster and Jesse Wellen — the last people known to have seen the ill-fated robot — might be getting the last laugh.

👽@edbassmaster & I just picked up a hitchhiking robot!! This night has gotten really weird. @hitchBOT pic.twitter.com/Q2ijplpAT1

But Fox 29 reporter Dave Kinchen went out to the scene and discovered there aren't any surveillance cameras that could have recorded the footage.

HMM...No surveillance camera at Old City gallery that could have taped @hitchbot assault. @fox29philly on the case. pic.twitter.com/kFXx9MdzBV

That discovery has left some wondering whether hitchBOT's destruction was part of a hoax pulled off by Wellen and Bassmaster, who is receiving his own television show on Country Music Television.

If it indeed is a prank, Wellen and Bassmaster have not yet admitted to the stunt.

@Jessewelle please reveal the prank already, THIS IS KILLING ME! You guys deserve an award for the most epic global prank ever! :)