Pennsylvania Governor Tom Wolf ordered the removal Wednesday of a Confederate flag put on display in Harrisburg this week as part of a summer exhibit curated by the Hanover Area Historical Society (HAHS).

The full Clausen Historic Flag Collection, displayed at the state Capitol's East Wing, features 50 replica flags from various points in American history and is scheduled to run through the month of July. Students at South Western High School in Hanover created the flags in partnership with local businesses as part of an Applied Manufacturing project.

On Wednesday morning, however, state Rep. Vanessa Lowery Brown, a Democrat serving the 190th Legislative District in North and West Philadelphia, removed the 1863 Southern Cross CSA and brought it to the office of Republican House Speaker Mike Turzai.

Earlier, HAHS curator Debra Markle had noticed the flag missing and wondered who took it.

"I just think it's wrong to impose their feelings upon everybody else," Markel said outside the exhibit Wednesday morning, before she was aware Brown took the flag. "It's just wrong. And I really don't want that missing flag to be the highlight of this exhibit...It's part of history, you know? We can't sugarcoat everything."

By 11 a.m. Wednesday, Turzai had the flag returned to the exhibit. Thirty minutes later, it was taken down again, this time following Wolf's order.

Jeff Sheridan, Wolf's spokesman, told PhillyVoice the Department of General Services removed the flag after Brown informed the governor's office of the incident.

"The reason the governor asked to have it removed is because the flag is a symbol of racism and hatred that shouldn't be displayed on a state building," Sheridan said. "This is not the first time we have asked to keep the Confederate flag from being on display at the Capitol."

A spokesperson at the Hanover Area Historical Society said Markel worked with Republican state Rep. Kate Klunk of the 169th Legislative District, south of York, to organize the exhibition. Klunk's office said she was not immediately available for comment. 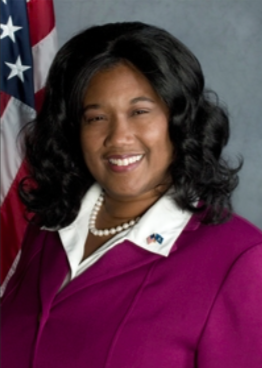 Brown shared her account with PhillyVoice to clarify what happened Wednesday morning at the Capitol.

"After I took the flag down and brought it to the proper authorities at the House of Representatives, I was assured it wouldn't be displayed again," Brown said. "I was satisfied, I thought. Then I went back later and it was there again. I was alarmed because there were a number of children there, between 8 and 14 years old, dressed in combat boots. I saw [State Rep.] Dan Maul there with Ms. Markel and another young representative. They were giving a press conference and I realized it was for this exhibit."

Brown said she approached Markel after the press conference.

"I asked her, 'Are you aware that this flag is offensive?' I told her I had removed it earlier. She got upset and said it was a part of Flag Day. Then she grabbed my arm and said she needed to speak with me privately. I told her, 'You can say whatever you have to say in front of everyone. I have nothing to hide.' She grabbed me hard enough that I had to ask her to remove her hand."

"Ms. Markel insisted the flag needed to be understood in historical context. She said, 'Are you aware that the slaveships that brought Africans here flew the U.S. flag?' That was even more offensive! I told the people there, 'That flag is a symbol of racism, hatred, oppression, and murder. People stood up for their rights to overcome everything it represents. I think it's wrong to have it there and not properly educate these children about its place in history.'"

At that point, Brown said, Capitol police intervened and threatened to arrest her if she did not cooperate. If she touched the flag again, they allegedly told her, she would be arrested. It isn't clear whose orders the Capitol police were following.

Later, police confronted Brown a second time in her office. When she told officers the flag would not fly at the Pennsylvania Capitol, they allegedly responded that she could be arrested on the spot if her threats continued.

"The most disturbing part of this is that they said the flag was 'stolen'—to criminalize an act of advocacy and awareness," Brown said. "People make this a black and white issue, but there is nothing in the historical context to absolve this flag. Above all else, it's a symbol of traitorous secession to uphold the practice of slavery."

Last summer, the controversial flag sparked a fierce national debate after nine people were brutally killed in the massacre at Charleston's Emanuel African Methodist Episcopal Church. The shooter, 21-year-old Dylann Roof, had previously been photographed draped in the flag and had written extensively about stoking a violent race war in America. U.S. prosecutors are seeking the death penalty in the case against Roof.

"We are almost one year since Charleston," Brown said. "Any time I see anything like that I have to honor the Charleston Nine.

In response to the Charleston attack, Alabama Gov. Robert Bently and the South Carolina legislature ordered the removal of the Confederate flag from their respective statehouses.

Brown, for her part, stands by her descision to act.