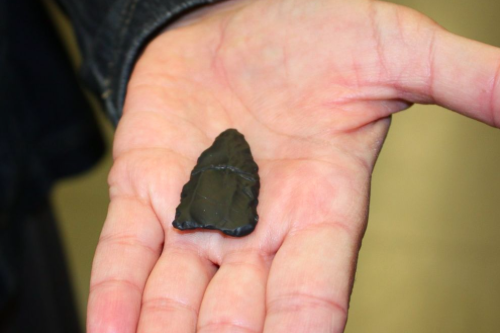 The universal image of a lonesome coastal resident fiendishly tracking along the beach with a metal detector to locate buried treasures isn't always an accurate reflection of how shore town discoveries are made.

A woman taking a walk with her sister in Seaside Heights last week spotted a dark, shiny object in the sand as the two were searching for sea glass. What she found, a 10,000-year-old spearhead, could be a window into the life of prehistoric inhabitants in the Americas, according to Tech Times.

When she picked up the artifact, 58-year-old Audrey Stanick recalled a similar discovery made last year at Clovis Point, when a 10-year-old boy found a spearhead that was authenticated and donated to the Smithsonian's National Museum of Natural History.

Stanick took the spearhead to the New Jersey State Museum to be analyzed by curators, who determined it was a sharpened flint hunting tool used by semi-nomadic natives from the Paleo-Indian period.

Dr. Gregory Lattanzi, an assistant curator at the museum, told ABC News the discovery was "significant because we now have another piece of evidence from prehistoric habitation sites from land previously exposed but now covered in water."

An intriguing conversation piece to pass around among friends, Stanick has opted to keep the spearhead with her in her purse for the time being. If she does decide to donate it, she plans to keep it in its native land in New Jersey where it was originally created. The discovery, she said, has encouraged her to consider participating in future excavations.