Woman lashes out on Facebook against man who ditched heartbroken dog 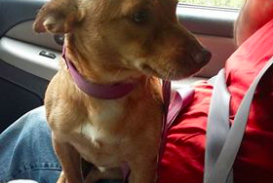 Every day, unfathomable stories of animal abuse and neglect come to our attention and there are far too many to cover each one while remaining vigilant about what's going on with human beings.

Over the weekend, for example, a "near-death" puppy was found wandering through Cobbs Creek Park and was taken in, with zero body fat, by Providence Animal Shelter. In April, a dog in Upper Darby was discovered with a gruesome neck injury after she was tied to a banister with a cable wire for 3-4 weeks. She found a new home after undergoing multiple reconstructive surgeries.

There are far worse stories than these. Reading them, let alone seeing them, provokes the kind of outrage and disgust reserved for only the absolute worst of experiences in life. Why would anyone be so spinelessly cruel to creatures that cannot explain or, in many cases, even attempt to realistically defend themselves.

A western Michigan woman is now creating waves on Facebook after a taking in a puppy her husband saw abandoned on the side of a road in the Allegan State Game Area. Danielle Cole's retelling of the story is difficult to stomach, not because of any physical violence, but because it displays how attached dogs grow to their owner, only to be mistreated.

The couple returned to the site later in the evening and found the dog waiting there. It was too terrified to interact with them, so they again returned the next day with their own dog and some treats. They have since taken the dog into their home.

Beyond this particular story — and the horrors of so many others — is the possibility of redemption for so many of these dogs and other animals at local shelters. If you stop by and take them for so much as a simple walk, it at least does a bit to restore their faith in people. Can every homeless or behaviorally troubled animal be saved? No, but messages such as Danielle's, shared more than 45,000 times, are a reminder that each one has a story.