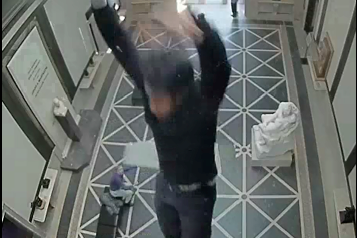 In this image from a surveillance camera at the Rodin Museum, worker Phani Guthula, can be seen falling through a glass attic floor on November 26, 2012.

A worker who sued the Rodin Museum in Philadelphia for injuries he suffered after falling through a glass floor while inspecting lighting will receive a settlement of $7.25 million, according to his lawyers.

A press release from the law firm of Saltz, Mongeluzzi, Barrett and Bendesky, who represented the worker, Phani Guthula, stated the settlement was reached on Friday, just as jury selection in the civil trial was about to begin in Philadelphia Court of Common Pleas.

Guthula, a Philadelphia-area energy efficiency engineer fell 38 feet through a glass attic floor on Nov. 26, 2012 and suffered multiple fractures and other traumatic injuries, the law firm noted in its release. Guthula was "hospitalized for more than 45 days, has had more than 15 surgeries, and requires intensive life long medical care," his attorney's said.

The video below was captured by the Rodin Museum's surveillance cameras and provided to PhillyVoice by Guthula's attorneys. Be warned, some may consider the footage graphic.

“Testimony at trial clearly would have demonstrated that the defendants failed miserably in their duty to protect Mr. Guthula," one of his attorney's, David Kwass, said in the release. "Guard railings installed to keep people off the glass floor were not in place, security personnel who escorted him to the site were uninformed and inattentive, and there was no signage to warn against a fall hazard to which everyone – after the accident – agreed existed when he almost met his death."

In addition to Kwass, Guthula was represtented by attorneys Larry Bendesky and David Langham in the worker's claims against Philadelphia Museum of Art – which owns and operates the Rodin Museum – and Allied Barton Security Services.

At the time of Guthula's injury, the Rodin had recently completed a $9 million renovation, and he was doing an energy efficiency inspection while working for consulting contractor, ICF International, his attorneys said. The museum was open to visitors at the time of the incident, which was recorded by the museum's security cameras.

“One of the Rodin’s most famous sculptures is titled, Gates of Hell,” Bendesky said. “The chilling picture of Phani Guthula falling nearly to his death could have the same title; his life has been a living hell every day since his fall. His accident was totally preventable had those responsible for his safety just done their job.”

The Philadelphia Museum of Art provided the following statement in response to the decision.

"The Museum confirms that it has participated in the settlement of a dispute related to the tragic accident in 2012 at the Rodin Museum. Contrary to the press release issued by the lawyers for the plaintiff, the settlement involved several parties in addition to the Museum. Unfortunately, the lawyers' press release contains other inaccurate statements about the accident—most notably the incorrect assertion that the Museum had not provided appropriate signage and other safety precautions in the attic spaces of the Rodin Museum."