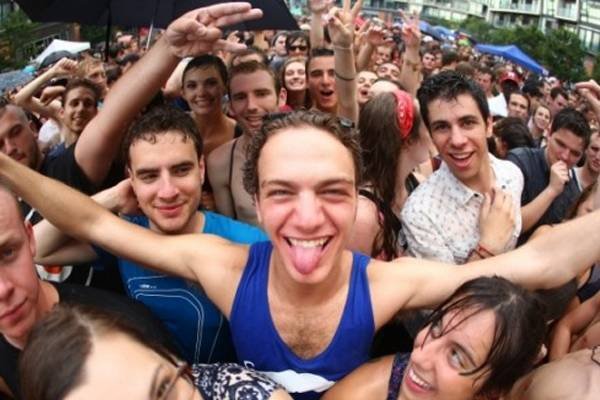 Participants pose at the 2014 "World's Largest Bar Crawl" in Philadelphia.

For those who avoid the city's streets for the annual Erin Express, and those who participate, take notice. "The World's Largest Bar Crawl" is returning to Philadelphia.

On Saturday, May 9, thousands of people will start a city-wide drinking parade that will attempt to break the record of largest bar crawl. The Guinness Book of World Records lists Kansas City, Missouri as the current title holder for the 2013 Crawl for Cancer that had 4,885 participants and spanned 10 bars.

A USA Today report from 2014 on how police struggle with bar crawls quotes Ray Sheehan, one of the event's organizers, who said despite having over 5,000 people for last year's event, they didn't technically break the record. This year, the early projection from organizers is 10,000 people:

The event is $5 for the basics (map, drink specials) and $20 for a t-shirt and free admission to the reunion parties. According to The Crawl's website, the event is for a good cause:

The Crawl will be supporting The Barkan Family Healing Hearts Foundation, whose mission is to provide financial aid to families who are in need, due to recent adversity or tragedy such as sudden death or illness of a parent or child or the loss of a home or property due to fire, flood or disaster. We also will be supporting the Fraternal Order of Police Survivor's Fund that helps families of fallen officers.

The participating locations and accompanying map has yet to be released, but if the map from last year is any indication, there should be a heavy concentration of bars in Center City, Old City, and Northern Liberties. The crawl will stop in over 50 spots.

So wether you're excited for an excuse to day-drink or dreading a sea of intoxicated partiers, mark May 9 on your calendar.