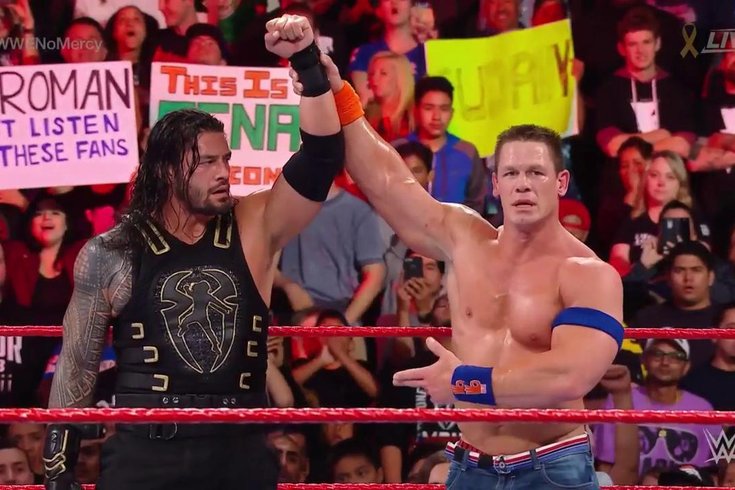 The Staples Center in Los Angeles hosted WWE’s No Mercy pay-per-view event on Sunday night. Last year, No Mercy was a SmackDown Live branded show, so this year’s show had a bit of a different taste to it. Of course, the show was headlined by two huge matches – Brock Lesnar defending his WWE Universal Championship against Braun Strowman and John Cena taking on Roman Reigns in what many have tabbed a future WrestleMania main event.

On the Kickoff Preshow, there were many “WrestleMania” references to describe those matches, so WWE gave fans a lot to get excited about heading into the main card. Would they deliver?

Elias defeated Apollo Crews by pinfall on the Kickoff Preshow

Elias started his mini-concert by disparaging L.A., which was no surprise. Apollo Crews interrupted him much to the chagrin of yours truly, but the action inside the ring was pretty good. Elias got the win after hitting the Drift Away.

With Bo Dallas and Curtis Axel accompanying Miz to the ring, there was no doubt they’d get involved somehow. Of course, as the pretty good match between the two was winding down, The Miz was able to hit the Skull Crushing Finale after interference when the referee wasn’t looking to retain his championship.

After the match, Jordan gave a pretty lackluster promo about how the people “lovingly chant ‘You Suck’” for Kurt Angle, but The Miz really does suck.

Jordan’s got some work to do on the mic. But, invoking Angle and the crowd’s adulation for him may be the beginning of a long-winded heel turn for Jordan, who would benefit from that in a big way. He’s got the tools to back himself up in the ring, and in being a heel, he would probably feel more comfortable on the mic because he can be a little more honest. The crowd is flat out turning on him right now, why not use that to enhance him?

Before the match started, Wyatt attacked Bálor. He was being helped up the ramp before Wyatt got on the mic, basically goading him back into the ring where the match finally began.

Bálor was sporting some new gray ring gear which actually looked pretty awesome. The match was a back-and-forth affair,

Bálor hit him with the Coup de Grâce off the top rope to get the win.

These four have great chemistry together, as was evident in this match. Some neat and original spots, not to mention Cesaro getting his teeth knocked in on a slingshot into the LED ring post. It wasn’t pretty.

What was pretty was some of the offensive sequences in the match, most notably when Sheamus delivered White Noise to Ambrose as Cesaro powerbombed Rollins off the middle rope onto his partner. However, that didn’t get the pinfall. What did get the pinfall was Sheamus accidentally nailing Cesaro with a Brogue Kick, then eventually eating Dirty Deeds from Ambrose, giving the champions the victory.

Note: Here’s Cesaro getting stitches after the match. Viewer discretion is advised.

These women all had great chemistry together. Many thought Emma was there to eat the pinfall, but that was not to be.

However, what I had wanted to happen, alas, did not. Bliss got the DDT on Bayley to pin her and retain the championship. No Bayley win. No Banks heel turn. At least for now.

Maybe the biggest match of the year took place Sunday night. In what was tabbed as a WrestleMania worthy main event, John Cena and Roman Reigns fought in a one-on-one battle in the Staples Center.

The match started off pretty slow for my liking, and when Cena left the ring to head up the ramp to the back, I really didn’t think it made any sense at all. Turn his back on your opponent and think Reigns would just let him get counted out? It didn’t make sense and I thought that was pretty lame.

But the match picked up after that. The two had some good chemistry inside the ring, and Cena would hit an Attitude Adjustment for a two-count, much to the dismay of many. When’s the last time Cena won with just one Attitude Adjustment?

Not to be outdone, Cena kicked out of a Superman Punch from Reigns before hitting him with another Attitude Adjustment off the middle rope. Reigns also kicked out of that. Then, Cena wanted to put Reigns through one of the announce tables on the outside, but Reigns was able to counter and nailed a spear on Cena through one of those tables. Cena didn’t stay down for the three inside the ring.

Cena would make his comeback and hit two straight Attitude Adjustments on Reigns, who kicked out. Maybe Cena should retire that finisher? Or … maybe that’s been the entire story of the last few years all along. Hmmm…

Because Cena couldn’t put away Reigns, it allowed him to hit the Superman Punch once again and another spear, this time putting Cena down for good.

After the match, Cena raised Reigns’ hand, staying in the ring for a bit afterward. It was almost like a sendoff for Cena, which was interesting given that he hasn’t retired yet. The crowd chanted, “Thank you, Cena,” as he stayed in the ring and ultimately left to go backstage.

Why did @JohnCena feel like a burden was lifted off of his shoulders after coming up short against @WWERomanReigns at #WWENoMercy? pic.twitter.com/a85yvoZqBp

Cena was fairly emotional during his segment on RAW Talk after the show.

This will sure get people talking. Enzo Amore defeated Neville by hitting him with a low blow when the referee wasn’t looking, becoming the new WWE Cruiserweight Champion.

The match left a lot to be desired, but one should have expected a match like that. Amore isn’t a great technical wrestler, and Neville isn’t at the point where he could carry someone else in the ring. There were also many fans upset that Amore won simply because of how he won. Amore isn’t a technical masterpiece inside the ring, but the finish sure got people talking about the Cruiserweight Division. However, it wasn’t a lot of positive talk.

I’m willing to see how this plays out, but Amore will now have to carry an entire division on his back and try to make the most of it.

This match was about what I expected it to be - lots of hard-hitting, high-impact moves between two giants. As big as Lesnar is, seeing him in the ring with Strowman almost made him look pedestrian. And there’s nothing wrong with that. Strowman is, simply put, a beast.

When Strowman hit Lesnar with a chokeslam after Lesnar nailed him with a suplex, I have to admit, I thought there was a chance he could walk away as Universal Champion. But the finish kind of came out of nowhere, as Lesnar lifted Strowman onto his shoulders and delivered an F5, pinning him to retain the Universal Championship.

● The sendoff for Cena was interesting, as was his segment on Raw Talk after the pay-per-view. It’s sure to get people talking.

● Reigns seems very comfortable with the crowd almost 100% against him, while not fully turning heel yet. Is that on the horizon? I don’t think so. I think he’s fine where he’s at right now.

● Amore will be asked to make 205 Live and the Cruiserweight division appointment television. Could he really do any worse than the previous title holders?

● Lesnar picking up Strowman for an F5 is just as impressive as you’d think.

● Should one finisher end a match? I’m not sure. I love the build of a story during a match. However, sometimes finishers are necessary to end matches abruptly, kind of like how Lesnar did on Sunday night.

● Cesaro is a champ.