Remembering Bobby 'The Brain' Heenan, the greatest wrestling manager of all time 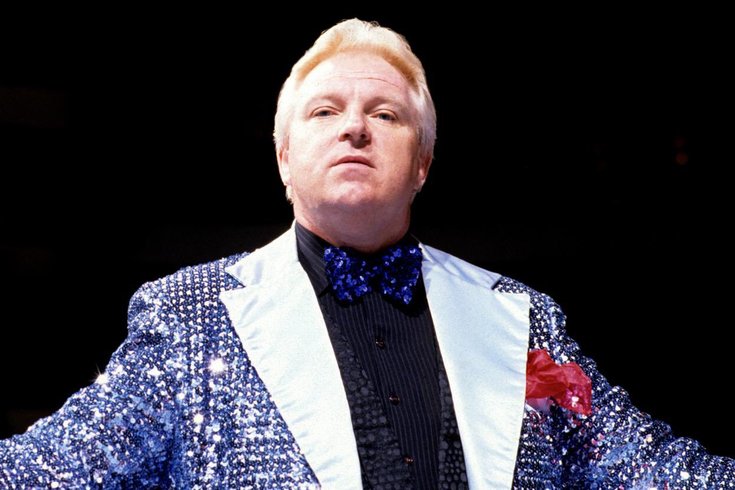 [Bobby "The Brain" Heenan showing off a dazzling suit during his managing heyday.

One of professional wrestling’s best announcers of all time broke the news late Sunday afternoon. Jim Ross tweeted, “The news of Bobby “The Brain” Heenan’s passing today gutted me. I loved our time together. No one ever did it better than the Wease.”

I breathed a slight sigh of relief. Yeah, Jim Ross’ Twitter was hacked.

“Saddened by the news that arrived this afternoon from Bobby Heenans daughter Jess, that he has passed. Bobby and his family have had to endure so much because of his health. Bobby Heenan was such a great friend. You don’t replace people like that. Condolences to Cyndi, Jessica, family, friends and fans. RIP Bobby.”

Heenan’s death came to many as a surprise. But the truth is, Heenan has been battling health problems for over a decade. He’s dealt with throat cancer, tongue cancer, and underwent reconstructive jaw surgery in 2007. His voice was gone.

The man who brought plenty of one-liners and comedic moments had perhaps the most special connection to wrestling fans taken from him. It’s almost poetically unfair.

Growing up, kids usually flock to the good side in the battle of good vs. evil. Heenan made that easy to do as I began watching wrestling in 1990. The first memory I have of him is slapping Andre The Giant, and then having the big man turn on his manager to the cheers of the thousands in attendance inside the Toronto SkyDome. It was then that I knew just how important Heenan was as a wrestling figure. As much as the fans were loving Andre, even as a kid I felt they had to have really hated Heenan.

Heenan managed the likes of “Ravishing” Rick Rude, Mr. Perfect Curt Hennig, Ric Flair and Lex Luger, the four I remember the most about my childhood. As great as these wrestlers were inside the ring, they just wouldn’t have been the same without Heenan by their side. Similarly, wrestlers that had Heenan as their go-to to help put them over even when he wasn’t managing them helped them out tremendously. Crush turned heel on Randy Savage in 1993, and though he was associated with Mr. Fuji, Heenan’s commentary on why Savage was such a bad friend to Crush was so believable — especially since we didn’t know the ‘real’ story of why Savage didn’t call Crush in the hospital [hey, he might have and the heels were just lying about the whole thing] — took Crush’s character to another stratosphere.

That’s just one example off the top of my head. Heenan also made Lex Luger’s debut in the WWF in 1993 feel like it was even bigger than Ric Flair coming in 1991.

Speaking of Flair, how can I not mention the masterful performance he put on at the 1992 Royal Rumble? Still the greatest Rumble match to date, Heenan played a huge role in that. From wrestler to wrestler, friend to friend, foe to foe, Heenan did just as much for Flair in that match [Monsoon had a huge role in that, as well], as Flair did in the ring.

And the on-air meltdown he had after Flair lost to Savage at WrestleMania VIII? Nothing has rivaled that since.

Nobody can seem to match the sheer greatness Heenan exhibited, no matter how many have tried.

Corey Graves, whose in-ring career has been cut short but who may now be the best announcer in WWE, tweeted, “Without him, there is no me.” That’s the sentiment for a lot of today’s wrestling announcers. While Gordon Solie and Jim Ross can be argued as being the greatest play-by-play announcers in history, Heenan’s antagonistic prose for anyone he’s worked with has to be considered as great as the formers.

Jesse Ventura is the only one that rivals Heenan, but it seems like Heenan was around a lot longer than Ventura and worked with so many different people. He, simply put, worked.

Heenan’s ability to sound ridiculous, serious, and thoughtful seems to be boundless. He told us why we should hate him and everyone he supported without telling us to hate them. He knew how to put over the babyfaces by trashing them. He held all of us in the palm of his hands.

I still watch old wrestling shows on YouTube that have Heenan and Monsoon on commentary. Squash matches? Don’t care. I’d listen to those two call anything inside and outside of the ring. Prime Time Wrestling will now be on loop in my house on the WWE Network. And I can’t wait for them to add new episodes because what I remember the most about that show was from 1991 and 1992 before its finale in 1993. Mr. Perfect’s face turn before the 1992 Survivor Series worked because Heenan made it work.

I don’t think Goldberg would’ve felt as special to me if Heenan didn’t put over how big of a monster he was, especially when he defeated Hollywood Hogan on a Monday Nitro in July 1998.

The time he “joined” the nWo because he was afraid for his job, only to return to the booth with Tony Schiavone chastising him, and him retorting he was the only brave one in WCW because he bit the bullet was a fantastic wrinkle in a huge storyline that really didn’t even need to take place.

Heenan knew wrestling fans. He was so quick-witted that one almost has to think he had those one-liners stored in his brain somewhere. He had one for every occasion, whether he was announcing or managing. The bumps he took were kind of surprising because even though he was a wrestler at one point, he legitimately was injured a few times. But he never let that get in the way of getting someone else over.

There was nobody better. There may never be anyone better. And that’s okay. We got to see the very best do what he does at the highest level for a long period of time. And even though his voice was taken away from him, from us, long ago, I’ve never stopped hearing it.

You can listen to The Straight Shooters' tribute to Bobby Heenan here.

Here are some of Heenan's greatest hits: