From the mat to the microphone: 'Something to Wrestle With Bruce Prichard' podcast has a big fan base in town 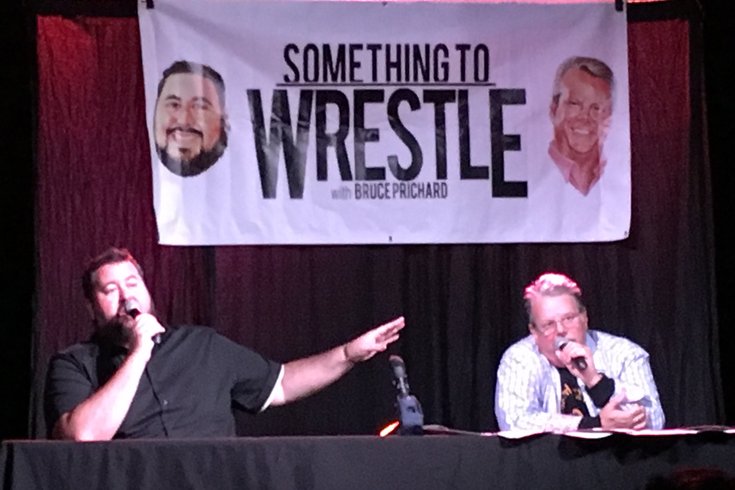 Cohost Conrad Thompson asks questions. Bruce Prichard answers them and does celebrity impressions on his podcast, "Something to Wrestle With Bruce Prichard."

You hear a lot about the “passion” of Philadelphia sports fans, both for good and for ill. For Bruce Prichard, that also goes for local fans of professional wrestling.

Prichard is perhaps best known for playing a wrestling character named Brother Love, a parody of ‘80s televangelists, who conducted interview segments and was the original manager of The Undertaker in the early ‘90s. But Prichard was also a high-level executive with WWF/WWE and right hand man of Vince McMahon for many years, working on everything from writing to talent acquisition. Last fall, the 54-year-old Prichard added podcast host to his resume.

Prichard’s podcast, “Something to Wrestle With Bruce Prichard,” has a simple format: There’s a topic, usually either a specific wrestler, event, or storyline, chosen by listeners. Cohost Conrad Thompson asks questions. Prichard answers them. A master storyteller, Prichard tells candid, behind-the-scenes tales – often sprinkled with Prichard’s hilarious, dead-on impressions of McMahon and others. The stories are so detailed that episodes often go past the three-hour mark.

“Something to Wrestle” has amassed a huge following, and Prichard and Thompson have begun taking the show on the road. It reached Philly on Sunday, with an afternoon show at the Theatre of the Living Arts on South Street, prior to the WWE “Battleground” event at the Wells Fargo Center. PhillyVoice spoke to Prichard last week about his memories of Philly, the city’s hard-core community of wrestling fans and how he came up with all of those impressions.

“Philadelphia is a market for wrestling, especially the WWF/WWE, that the audience was so damn passionate,” Prichard said.

At the live show, Prichard elaborated on his experiences with the Philly crowds, naming Philadelphia as one of the five most lively markets for wrestling, but noting that the crowds didn’t always cooperate – often booing the “good guys” and cheering the villains. However, he was sure to note that if something worked with a discerning Philly crowd, it would likely work everywhere else as well.

Prichard’s podcast is full of stories about eating and drinking with the wrestlers back in the day, and he said Pat’s and Geno’s were regular stops, especially when new people would join the company, in order to “make them eat both.” He’s more of a Tony Luke’s man these days, he said.

The Holiday Inn near the stadiums was always the wrestlers’ hotel, and Prichard said old-time commentator Gorilla Monsoon called the hotel “the demilitarized zone.” And Prichard added that the late wrestling legend “The American Dream” Dusty Rhodes, whenever in Philadelphia, would take him to a certain hot dog stand under the highway and always order one hot dog.

But Prichard says his favorite wrestling moment in Philadelphia was one night in February 2003, when he donned the Brother Love costume for the final time in a skit with his old pal The Undertaker. Prichard arrived as a “present” for the legendary wrestler, in a wooden box, and received a chokeslam and tombstone piledriver for his troubles.

The only Wrestlemania in Philadelphia was 1999’s Wrestlemania XV at the then-First Union Center, which was the subject of a “Something to Wrestle” episode back in March.

“And the Philly crowd, if they were nothing else, they were engaged. So that was always something that I loved. I liked the building, there was always a cast of characters around that you would see from the area … a lot of the old timers.”

The show on Sunday featured a whole lot of stories a bit more ribald and off-color than what is typically featured on the podcast, including the tale of taking Mick Foley to some local peep shows to prepare for an on-camera storyline. There was also a special guest: Brian Heffron, the local wrestling star who was known in the ring as The Blue Meanie. The Philly native, who got his start in ECW, told some old ring stories while also serving as emcee for the Q&A period.

ECW (Extreme Championship Wrestling) was the famed, “hardcore” wrestling company, based in South Philly that was hugely influential in the 1990s. While Prichard has been critical of the company over the years ­– and wasn’t shy about saying so on stage Sunday, despite some boos – he gave it credit for its influence. He also, over the weekend, made his first-ever visit to the former ECW Arena on South Swanson Street.

“It’s amazing that a company that has been out of business for more than 15 years is still so revered and still so loved,” Prichard said.

“That’s a credit to the creativity of [former producer] Paul Heyman, and the frenzy that he created. I wasn’t a big fan of the actual product, but I am a big fan of Paul Heyman’s, and it’s just a testament to his creativity that he could create a niche product in a market like Philadelphia, and be able to have people still talking about it, 15 years after it went bankrupt.”

Also at the show, Prichard brought out a lot of his famous impressions, aided in person by heads on sticks, featuring of the likenesses of McMahon, “Rowdy” Roddy Piper, Jim Cornette and others. Where did Prichard’s talent for mimicry come from?

“I have a habit of whenever I tell a story, I become the people in the story,” Prichard said.

“If I’m telling a story about Vince, and Vince has something to say, Vince comes out and says it, or Dusty or whoever. I become that person.” But he insists that every voice he does has been done to the face of the person he’s imitating.

You can download the Something to Wrestle With Bruce Prichard podcast here.