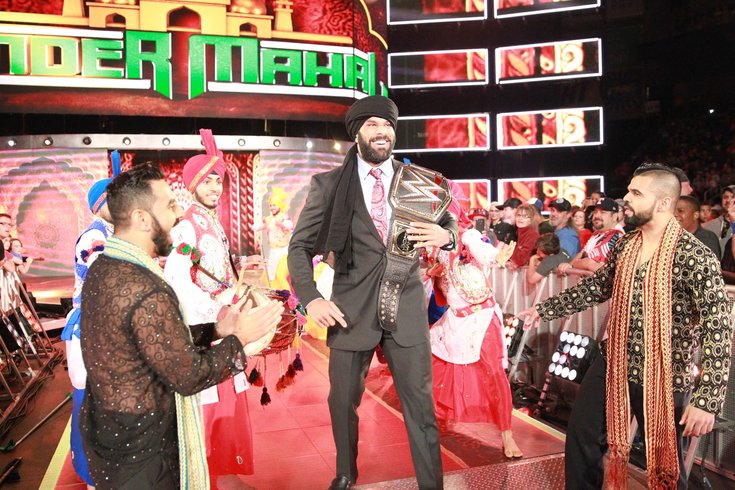 Jinder Mahal, accompanied by the Singh Brothers, walks down the aisle with his WWE Championship shining brightly over his shoulder during an episode of WWE SmackDown.

A year ago, Jinder Mahal was making his return to WWE after unceremoniously being released two years prior. After his initial return, he was mired in the mid-card and not doing much of anything on television.

Then, he went to SmackDown … WWE’s other mainstream brand. And while his first few months there was nothing to write home about, Mahal suddenly found himself main eventing a pay-per-view, challenging Randy Orton for the WWE Championship.

In his first opportunity, Mahal captured the WWE Championship. Was it a fairytale ending for Mahal?

Not to him. Mahal always knew he’d fulfill his potential, and Sunday night at the Wells Fargo Center in South Philadelphia, he’ll be main eventing the next WWE pay-per-view titled “Battleground” in a Punjabi Prison Match, defending his WWE Championship against Randy Orton. Yeah, I’d say so far, he’s fulfilled it.

And it’s that kind of motivation and drive that just may get him there. Ahead of his battle against Orton on Sunday, Mahal spoke to PhillyVoice.com and talked about returning to Philly as WWE Champion, his Punjabi Prison match, getting back up after getting knocked down and where he sees himself in one year.

There are still tickets available for Battleground on Sunday night here.

PhillyVoice: Do you look forward to coming back to Philly each time and what are you expecting Sunday night from the crowd during your Punjabi Prison match against Orton?

I do definitely know for sure they’re going to enjoy the match. It’s a Punjabi Prison match and it hasn’t happened in 10 years, and the structure is truly a monstrosity. I brought the Punjabi Prison this week on SmackDown, and it’s a spectacle. You’ve got to be there live just to appreciate the sheer size of it. It is a very risky match - for example, I went a little bit earlier and climbed the cage; it’s high and I’m scared of heights - but I know the Philly crowd is going to be rocking that night and I gotta do what I gotta do. I’m going to take the risks that I have to take to retain the WWE Championship.

PV: Have you watched the previous Punjabi Prison matches and incorporated some of that into your plan?

JM: Yeah, yeah, of course. The first one was Big Show and The Undertaker. The second one was Khali and Batista. So, yeah, I’ve definitely watched them. I’m a student of the game. I’m making a game plan and seeing what I can do, but it can’t really compare because those guys are a little bit bigger framed than myself and Orton. Me and Orton can really truly have a great, great match and steal the show just because of our size and the way we move. Our athleticism brings a whole other dynamic. It’s truly a match that hasn’t happened before.

I can’t stress how solid this structure is. It must’ve taken hours and so many people to set up, and I’ve seen Elimination Chamber, I’ve seen Hell in a Cell, and this structure by far is way more impressive than both of them. I think this is the most dangerous match in WWE history because there are actually two cages, one’s the same size as the ring and the other one is quite a bit bigger than the ring … it’s comparable to Hell in a Cell. You’ve got to see this structure in person to appreciate the size of it.

I’m actually glad that it’s in Philadelphia because the place is gonna be rocking and I’m gonna need that energy to thrive off late in the match to climb up that cage. It’s going to be a grueling match.

PV: The rules of the match are a bit different than standard cage matches. Do you like that aspect of the match or would you prefer a more traditional way to end it like a pinfall or submission?

JM: I like the rules. It’s something unique. It’s something different. Like I said, it’s been 10 years since it last happened. It’s not a match you see every day. It’s not a match you see every month. The first cage has four doors which are opened, each for a minute, so once they all are locked, you have no choice but to climb the first cage. Then you have to climb the second cage because there’s no doors on the second cage. So, you know, I like the rules and I think me and Orton with our styles and our size it’s going to really be a match that hasn’t happened before.

The structure is very unpredictable and it is a risky match, but I’m looking forward to it. It’s no joke and I’m not taking it lightly. I’m focused and driven. It’s going to be a breakout match for me. This is my match. I look forward to bringing this match back just like Undertaker sort of introduced Hell in a Cell. I think Punjabi Prison is my match.

PV: Do you feel like you’re in the same position The Great Khali was when he was World Heavyweight Champion regarding WWE’s expansion into India?

JM: Everybody always says that about expansion in India. India was always a huge market for WWE. Their number one viewership comes from India. I’m focused on becoming a better WWE superstar and the best performer in and outside of the ring that I can possibly be. It really is a 24/7 job.

PV: What was your motivation to return to WWE?

JM: Even before my return, I was focused on getting better and better and better and better. I haven’t hit my prime yet. I’m constantly improving. I haven’t even hit my peak. I’ve got many years ahead of me. There’s more title runs. I will one day become a WWE Hall of Famer. I want to be one of the all-time greats and that’s based on hard work and I’m going to do whatever it takes to be the best.

PV: Now that you’re engrained in the angle you’re doing, being the foreign heel, has it been difficult dealing with fans who don’t separate that part of the show as you playing that character?

JM: Yes and no. I take that as a compliment. When they do come at me, that means I’m doing my job well. That is my job. My job is to be hated, and I want to be the most hated guy in sports entertainment and the entire WWE. I think I’m well on my way to becoming that. That’s my job and that’s exactly what I’m going to do.

JM: Yeah, I think it is my chance to run with it. And also along with other superstars. Braun Strowman is coming into his own. You’ve got Roman Reigns, Seth Rollins and Dean Ambrose. Even on the SmackDown side, you’ve got Shinsuke Nakamura, AJ Styles and Kevin Owens. You know, they’re so many guys that are looking to break out. It really is a whole new ball game on the SmackDown side. You know, Baron Corbin is Mr. Money in the Bank and he’s coming for my championship soon.

You know, Cena’s a free agent, but what’s so crazy is that to this day, he still gives 100 percent. I was just at a live event with him last week, and he doesn’t phone it in any night. Every night he performs and gives it his all. He’ll be performing this Sunday at Battleground, he has a Flag Match with Rusev. Rusev is another guy who’s looking to break out, who I believe is a future WWE Champion, definitely. So, I think there’s a New Era coming in WWE, and some of those guys have already main-evented pay-per-views. Times have changed, and it’s on to the next generation. But at the same time, I know Cena has been gone for a while, but he still performs at a very high level.

PV: You had a prominent role in NXT when it began. What do you think about the brand and how it’s grown since you’ve been there?

JM: Yeah, it kind of has a cult following in a way. It’s the cool thing to do. It’s a cool event to go to, which I think is great. You can see the crowd is very passionate and the atmosphere is electric, and the performers thrive off of it. You see what it is today to where it was when me and Seth Rollins had our first NXT Title match, I would never have predicted it would be where it is today. I just thought it was going to stay on Hulu or whatever it was on. There was no WWE Network at the time.

Triple H has really worked very hard at not just getting away from that developmental brand, to just its own brand. There’s Raw, there’s SmackDown, and then there’s NXT. No one is above the other. There’s tremendous performers in each of those brands that want to steal the show every night.

PV: You’re one of few superstars that have been on both Raw and SmackDown since you returned last year. Obviously, it seems like SmackDown’s a better fit now, but overall, what do you think is the best fit for you?

When I first came back to Raw, I wasn’t really doing much. I would ask Roaddogg, ‘Hey, man, would you pull me to SmackDown, please?’ and it eventually happened. I also feel like I relate more on SmackDown because when I debuted in 2011, I was drafted to SmackDown. I just feel at home on SmackDown.

PV: Where do you see yourself in one year?

PV: Interesting you said that, because I wanted to ask you about 3MB. What are your thoughts about that whole run and what you thought about Drew McIntyre’s path?

JM: Drew’s one of my best friends. We’re always texting back and forth. Just to think a couple years ago, we were considered a joke and failures. I’ll be frank about it. I considered myself a failure when I got released from WWE after 3MB just because I didn’t live up to my potential. I didn’t live up to the expectations that I set for myself. I was going to come back with redemption and that’s exactly what I did.