WWE Great Balls of Fire: Could Samoa Joe wrestle the Universal Title away from Brock Lesnar? 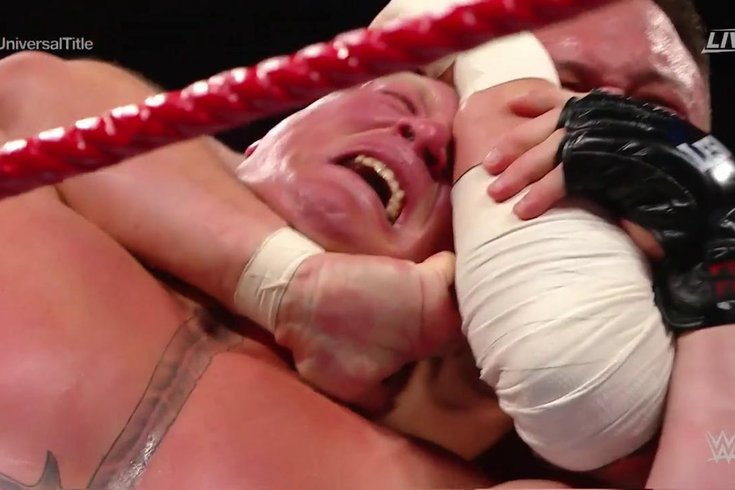 Samoa Joe locks in the Coquina Clutch on Brock Lesnar during their Universal Championship match on Sunday night.

The first annual Great Balls of Fire pay-per-view – yes, that’s the real name of the pay-per-view … I know – emanated from the American Airlines Center in Dallas Sunday night. Headlined by what many viewed as a monumental matchup between Brock Lesnar and Samoa Joe for the WWE Universal Championship, the card from top to bottom was pretty stacked.

Hilarious name or not, the Raw brand certainly wasn’t pulling any punches when it came to the buildup for this brand exclusive pay-per-view. We can at least give them credit for that.

Here’s what happened in Dallas on Sunday night, followed by my instant reaction.

Another Cruiserweight match on the Kickoff Preshow. And WWE’s probably wondering why their Cruiserweight division hasn’t grabbed their audience’s undivided attention. Stuff like this is why.

It wasn’t a bad match, but how much longer is Neville going to be champion? I think it’s ultimately good he’s brought some stability to a hot potato title, but it’s about time for a babyface to dethrone The King.

As for the match, the champion retained after he crotched Tozawa on the top rope, kicked the rope behind the referee’s back, then hit Tozawa with a spinning kick which I guess was just above what we would consider a low blow.

Wyatt’s been struggling ever since losing the WWE Championship to Randy Orton at WrestleMania earlier this year. I say struggling because he’s virtually the same character as he was when he re-debuted on the main roster in 2013. There’s virtually no substance anymore. We know what he is. He says the same thing week after week. His matches are virtually all the same.

And then this mini feud with Rollins just may be each of their worst. It means nothing, and there’s been no importance placed on the feud. What does winning this match mean?

Nothing. Absolutely nothing. But it was a good match overall, with Wyatt getting the win with Sister Abigail.

Amore showed some fire here, but this was basically a glorified squash for Big Cass who completely demolished his former tag-team partner. Are there bigger things ahead waiting for Big Cass?

Cass did crush it on Raw Talk on the WWE Network after the show. I suggest seeking that out.

Sheamus hit a Brogue Kick on Matt Hardy 30 seconds in, allowing Cesaro to get a one-fall advantage very early in the match.

Ten minutes in, Cesaro and Sheamus notched themselves another fall after a double-team White Noise to Jeff Hardy to go up two falls to zip.

Soon after, Jeff hit Cesaro with a Poetry in Motion, Matt then nailed him with the Side Effect and then it went back to Jeff who nailed a Twist of Fate to pin him to cut it to 2-1.

When Matt and Sheamus were getting back in the ring after being on the outside, Cesaro grabbed Hardy and threw him into the ring post. The referee counted to ten and counted out Matt, giving the Raw Tag Team Champions a 3-1 advantage.

In a bit of awesome teamwork, Matt tagged Jeff as he bridged Cesaro, and Jeff came in with a double legdrop to pin Cesaro’s shoulders to the match to cut the advantage to 3-2. Minutes later, Matt hit Sheamus with a Twist of Fate off the top rope,

Jeff hit Sheamus with the Swanton Bomb, but Cesaro was the legal man, and he trapped Jeff into a pin to put the champions up 4-3. He then ran away from Jeff on the outside of the ring, but they ultimately found themselves back in the ring and Jeff hit the Twist of Fate, but time ran out as 30 minutes expired as the referee was making the count.

Bliss once again used her double-jointedness to freak out the referee and her opponent, but it didn’t do her a lot of wonders.

A cheap shot to Banks’ face may have sounded good at the time, but Bliss eventually had enough of her opponent to get counted out of the ring on purpose. She lost the match, but she didn’t lose the title. Smart, right?

Yeah, let’s hope we see a rematch between these two soon. With the way this match ended, I’d bet on there being some sort of stipulation match coming soon on Raw or at SummerSlam. Or both!

If you didn’t think the Miz-tourage would get involved in this match, then I have a lake in Philly to sell you.

The Miz and Ambrose renewed their rivalry on Raw from SmackDown, and it’s been pretty entertaining thus far. However, with Bo Dallas and Curtis Axel now a part of the Miz-tourage, there’s no telling how long The Miz will hold the Intercontinental Championship.

It’s at least another night, as Miz pinned Ambrose after a Skull-Crushing Finale. Of course, Axel and Dallas got involved, so we could also see another match between these two with Maryse and the Miz-tourage banned from ringside.

This was a fun match. We knew it was going to be a fun match. Lots of hard hitting and throwing, including Reigns throwingStrowman through the LED screen on the entrance ramp.

Reigns went for a spear, but Strowman sidestepped it and Reigns wound up right in the back of the ambulance. Strowman quickly closed the doors to win the match officially, but it hardly was the end.

Reigns opened the doors, speared Strowman, threw him in the ambulance, then threw out the ambulance driver and commandeered the vehicle. He drove it to a backstage area, then reversed the vehicle into a cement wall.

Panic backstage ensued. General manager Kurt Angle made an appearance and yelled for people to call 911. During a filler match featuring Heath Slater and Curt Hawkins, there was a split screen that eventually just went to one screen as the cameras documented efforts to free Strowman from the ambulance. The jaws of life were used to free Strowman, who was battered and bloodied. He refused help and walked off on his own.

Joe attacked Lesnar before the bell even rang and planted him through an announce table at ringside with auranage.

Lesnar eventually made his way back into the ring, the bell rang, and the two hosses had a memorable match where the champion was dominated for much of the match.

Joe locked in the Coquina Clutch a few times, but Lesnar found a way to counter each time - the final time being a counter into an F5 that put Joe down for the count.

Joe may have lost, but he certainly didn’t look weak in doing so.

Tozawa’s a good babyface who’s getting a good crowd reaction, albeit with the help of O’Neil. Why not pull the trigger and have him win the title?

Wyatt got a big win, but what will it mean in the future? The character is so stagnant now that any match he wins almost means nothing.

The Iron Man tag title match was fantastic storytelling throughout. The entire match told a great story, and the ending was perfect. Can’t get the timing down much better than that.

Looking forward to Big Cass from here on out.

Bliss took an easy way out yet again, but doesn’t she know the Raw general manager won’t put up with that? The cheating heel is cool and needed in pro wrestling and all, but sometimes it has a leash. Here’s to another Bliss-Banks match, though.

Reigns/Strowman almost felt like a double turn. What babyface drives an ambulance into another vehicle with his enemy inside? What heel walks away without help? This was akin to Stone Cold Steve Austin walking out of WrestleMania 13 without help after he lost to Bret Hart - and that match also featured a double turn. There’s no way Reigns can’t be booed and Strowman can’t be cheered after that, right? RIGHT?

Joe looked absolutely dominant for a good portion of the match against Lesnar. Who else can say that? Anyone who thinks he looked weak because he lost to one F5 has been conditioned to think finishers aren’t finishers in pro wrestling. Sure, anyone can point to the creativeness of it, but Joe losing to one F5 isn’t making him weak. Joe became a bona fide global superstar on Sunday night.