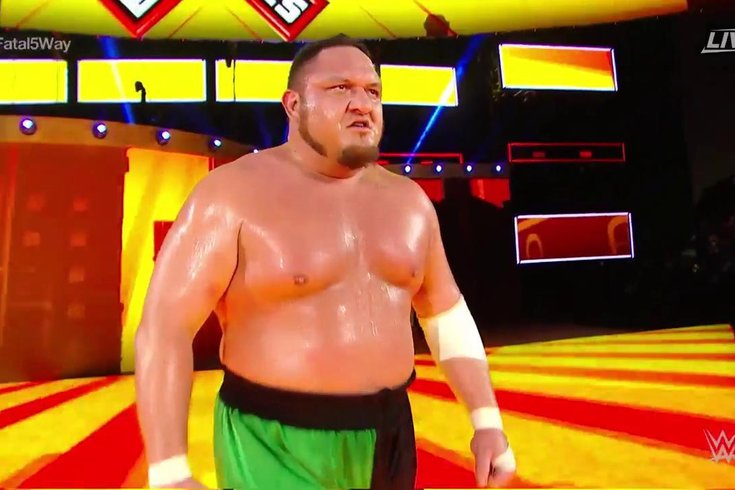 Samoa Joe won a Fatal 5 Way Match on Sunday night to become the No. 1 contender to Brock Lesnar’s Universal Championship.

The Royal Farms Arena in Baltimore was ready to get extreme on Sunday night. Ironically enough, there was very little in terms of extreme wrestling action given to us by WWE, but that shouldn’t have caught anyone by surprise.

I’m thinking maybe next year, get rid of the “Extreme Rules” name and go with something more modern day. Something like “WWE Live.”

Anyway, Sunday night may have been the most un-extreme night on the WWE calendar after it was all said and done. Here’s what went down in Baltimore for Raw’s June pay-per-view.

This was one of the better Kickoff Preshow matches I’ve seen in a long time. Both Kalisto and Crews were determined to not be an afterthought on this night, and they certainly were not. There were a lot of good spots in this match, but my favorite one was towards the end.

After Crews hit his standing shooting star press, O’Neil for some reason distracted Crews, who only got a two count on Kalisto. Kalisto took advantage of the distraction and hit the Salida del Sol on Crews, kicking O’Neil off the apron in the process, and got the pin.

The rules in this one were pretty easy to follow, but for a match at Extreme Rules, it was pretty silly to have a match where rules were in place for Dean Ambrose to lose his Intercontinental Championship if he was disqualified during the match.

And that almost happened. In a pretty good opening match on the main card, Ambrose and Miz entertained me enough to not care about the obvious loopholes in logic. Such as, why didn’t Ambrose try to have someone attack him right away?

It wasn’t until late in the match where Miz asked Maryse to slap him while she was on the apron. The referee knew exactly what they were up to and decided to just send Maryse backstage and continue the match. However, during the distraction, Miz threw Ambrose into the back of the referee, who should probably get his own place in the WWE Hall of Fame because he took a bump that every other referee in WWE history would’ve been knocked out cold from outside the ring.

The referee looked back and saw Ambrose, walked toward the ring announcer teasing he would disqualify Ambrose for “hitting” him, but Miz hit the Skull Crushing Finale on Ambrose from behind, and the referee decided to count the three instead of calling for the disqualification.

Interesting, somewhat. Entertaining to me. The Miz is now a seven-time WWE Intercontinental Champion.

This match was, well, there. It wasn’t great, but it wasn’t terrible. So I call that a win. Swann hit the reverse 450 splash on Dar for the win.

The guy can jam.

I was hoping this match would make us forget about that terrible “This Is Your Life, Bayley” segment from Raw last Monday night, but it kind of just added itself to the list of bad things stemming from this feud.

The match was very underwhelming. In fact, there was a pretty ridiculous spot where Bayley was closer to the Kendo Stick after it had fallen onto the mat out of Bliss’ hands, but decided to block Bliss from getting access to it instead of just picking it up herself to use.

Had the stick been closer to Bliss, then this spot would’ve made more sense. Eventually, Bliss would gain access to the Kendo Stick and beat the bejesus out of Bayley. She then hit her with a DDT for the pin.

So when Jeff Hardy escaped the cage, leaving Matt Hardy inside alone with both Cesaro and Sheamus, when he re-entered the ring with a dive from the top of the cage, he technically re-entered the match and had to escape again in order to have a chance for the Hardyz to be declared winners.

After Sheamus and Cesaro hit a double-team White Noise on Matt, that is.

Eventually, there was a race to escape the cage. Cesaro and Sheamus went over the top of and had their feet hit first before Matt was able to pull Jeff back out of the cage. At first, it looked like maybe there was a mistake and it was meant to be a tie with both teams hitting all eight feet on the floor at the same time, but that was not the case. Cesaro and Sheamus clearly hit first and were declared winners, becoming two-time Raw Tag Team Champions. And they’ve beaten The New Day and The Hardyz to claim their titles, respectively. Impressive.

You’d think in a submission match, the only way to win would be by making your opponent submit. After all, that’s what we all were told, too. But apparently, it has to be inside the ring. OK, fair enough. That makes sense. But why, why, why would the referee count a guy out of the ring? Why?

It just doesn’t make sense. But WWE makes their own rules up all the time - see above in regards to the Steel Cage Tag Team Title Match – so I guess we shouldn’t be surprised.

Moments later, Neville hit the Red Arrow on Aries’ back, locked in the Rings of Saturn and Aries tapped.

In the beginning of the match, Joe and Wyatt teamed up against the others, much like they did against Bálor last Monday night during their Triple Threat Match on Raw. But, eventually, that teamwork would come to an end.

That’s because Wyatt pushed Joe into a Rollins’ suicide dive to the outside of the ring. Then came a lot of good stuff, as it took a while for the match to really get good.

Joe locked in the Coquina Clutch to Bálor on the outside, but Reigns hit both of them with a spear through the guardrail. I never get tired of seeing those spots.

Rollins then hit a frogsplash on Wyatt, who was prone on the announce table thanks to Bálor. It looked like Rollins hit his knee first into the table, and seemed to favor his foot after the match, so hopefully, he was just selling, or that it’s nothing major.

The main event winded down after Bálor hit Reigns with the Coup de Grâce, and as it looked like he was going to become the number one contender to the Universal Championship, Joe locked in the Coquina Clutch from behind. With nobody to save the match for Bálor or themselves, Joe got the win as Bálor passed out.

We’re going to see Joe vs. Lesnar at Great Balls of Fire on Sunday, July 9 for the WWE Universal Championship.

● Joe vs. Lesnar should be a spectacle. I wonder how much they’ll use Lesnar on Raw building up to it?

● Not mad about Cesaro and Sheamus winning the Raw Tag Team Championships, but hoping this leads to some Broken Hardyz stuff where they don’t exactly need the titles to be in a prominent position on the show anymore.

● It’s pretty cool that Cesaro and Sheamus beat both The New Day and the Hardy Boyz to win their two tag team championships.

● Hopefully, we’ve seen the end of the Bliss/Bayley feud for a while. It’s been very underwhelming, and the matches haven’t been too good.

● The Miz gaining his seventh Intercontinental Championship is pretty impressive. I like to look at wrestling accomplishments in numbers, and a seven-time champion is a great accomplishment, in my opinion.

Are you ready for Raw’s next pay-per-view?