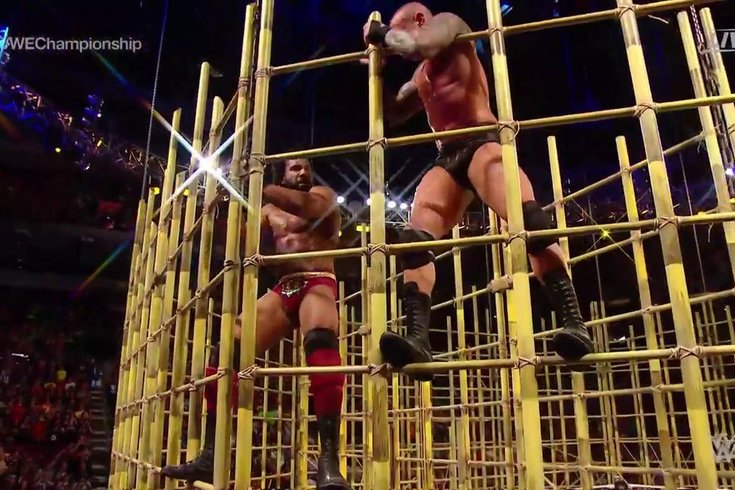 Jinder Mahal, left, and Randy Orton climb the Punjabi Prison while also fighting each other at the Wells Fargo Center in Philly on Sunday night.

The last time WWE held a pay-per-view in Philly in July was in 2013, so Sunday night when they came back in the heat of summer, the Philly crowd was as raucous as ever. Seeing the likes of AJ Styles, Kevin Owens, John Cena, Randy Orton, The New Day, Charlotte Flair, Becky Lynch, the WWE Champion, Jinder Mahal, and more really seemed to inject electricity in the crowd as I entered the Wells Fargo Center.

The buildup to this pay-per-view wasn’t great. The card wasn’t electrifying in and of itself. But if you put on a good show in front of a Philly crowd, the chances are that crowd is going to make it a great show. And that’s kind of how the night seemed it would be after the first two matches. But then, the rest of the card happened.

With the Punjabi Prison match headlining the event, WWE called for a “big” surprised in the main event. A surprise not many of us saw coming. But a surprise that, in all actuality, shouldn’t have really surprised us.

Just who returned to make his presence felt during the Punjabi Prison match? Let’s find out.

Dillinger is so over on the main roster, just as he was in NXT, but I have no idea why WWE won’t utilize him more. It’s almost as if even though he was called up to the main roster and is one of the most popular superstars with the crowd, the creative team can’t find anything for him to do.

So, the preshow it is. And a preshow loss, to boot. I’ll tell you this, though - English has some great vocal pipes on him. The dude can flat out sing. I’m jealous.

When I review WWE pay-per-views, I generally don’t include the Kickoff Preshow in my thoughts for the entire card. And, yeah, English defeating Dillinger on the preshow kind of let the wind out of the sails of the rambunctious Philly crowd, the opener on the main card really got the crowd back on track. And I thought to myself as I sat in my seat that if the opening match was just a taste of what we were going to get the rest of the show, then we were in for an historic night.

Near falls, fantastic maneuvers and the crowd made the main card’s opening match one of the best of the year. The Usos brought their A+ game, as did Kofi Kingston and Xavier Woods. There were many moments the Philly crowd, including myself, thought the match was over. I anticipated the title not to switch hands, but I was pleasantly surprised when Woods got the win for The New Day to give us new SmackDown Tag Team Champions.

These teams are great and that’s what tag team wrestling is all about. I highly suggest you catch this match if you haven’t seen it already.

There may be no cooler entrance in WWE right now than Nakamura’s. It truly is something to get involved in. With the combination of Nakamura’s gyrations and the violin music, it’s just a cool experience.

Corbin, who currently holds the Money in the Bank briefcase, has a little less of a cool entrance. In fact, some may describe him as flat-out boring.

Even by losing to Nakamura via disqualification after nailing him with a low blow, Corbin still was my favorite to walk away from the Wells Fargo Center with the WWE Championship. I thought he’d lose clean in his match because Nakamura seems to be the guy that won’t lose anytime soon on SmackDown. But with Corbin causing his own loss, it leaves room for another match, or maybe two, between these two as we move on.

Natalya defeated Charlotte Flair, Becky Lynch, Tamina and Lana in a Fatal 5 Way Elimination Match to become the No. 1 contender to the SmackDown Women's Championship

Even though Naomi, the SmackDown Women’s Champion, wasn’t wrestling on the card, she joined the commentary team during the match to get an up close look at all of her challengers before SummerSlam.

I was hoping WWE would give us a face vs. face match at SummerSlam for the SmackDown Women’s Championship, but I should’ve realized that company doesn’t enjoy that. After three quick eliminations, with Lynch submitting both Tamina and Lana, Natalya rolled her up and eliminated her.

It was down to Flair and Natalya. After Flair’s moonsault attempt crashed and burned with Natalya getting her knees in Flair’s gut, she rolled her into the bottom turnbuckle, then pinned her shoulders to the mat.

Instantaneously, the SmackDown Women’s Champion clapped and then got in the ring and offered her SummerSlam challenger a handshake. Natalya walked off with a smirk on her face.

This may have been the most underwhelming match of the night. It’s unfortunate because I guarantee you 99 percent if not 100 percent of the audience thought this would be the Match of the Night. I’m including myself in that numeric figure, too. These guys are the best at what they do, but the ending just made no sense at all.

With the referee down, Styles locked in the Calf Crusher. Owens reversed it into a crossface, which was eventually reversed by Styles into his own crossface. With the referee coming to his wits, Owens rolled Styles over as the referee counted to three. Styles clearly had his right shoulder off the mat, but who cares, right? WWE didn’t even show any replays from the ending, because it was that bad.

And the crowd knew it was bad. There was no reaction at all for Owens’ win, who the crowd loved just as much as Styles. These two didn’t deserve a bad ending like that. Who booked that? Hopefully, there’s a rematch, either on SmackDown Live or SummerSlam.

I’ve come to enjoy and appreciate Cena’s matches and what a great performer he is, but on Sunday night, the Flag Match between him and Rusev failed to deliver. In person, I kind of liked the match. I think the atmosphere had a lot to do with that. But then, the crowd just lost its fire and the spots in the match when both guys grabbed their flags and fought up and down the ramp, eventually ending with Cena winning the match by stamping his flag on the pedestal first. I don’t think anyone thought Cena would lose, but an Attitude Adjustment on Rusev through two tables to make it happen was probably the coolest part of the match.

While it wasn’t anything special, both guys worked hard and hopefully, Rusev can have a meaningful feud. As for Cena? I have a theory. Stay tuned.

Zayn lost on SmackDown. He won here. Good match in a tough spot in between Cena/Rusev and Mahal/Orton.

With the second door open, @RandyOrton looks to create some distance between himself and @JinderMahal! #WWEBattleground #WWEChampionship pic.twitter.com/sZuWaTJJty

I could barely see anything during this match. While I think the whole structure is impressive and I like the rules of the match in a way, they really need to do something about the visual problem it creates for the people in attendance.

Of course, Orton would have to basically fight in a handicap match, with both Singh brothers making their presence felt after hiding underneath the ring. With Orton fighting off the brothers, he seemed to be in the clear to climb the second structure and win back the WWE Championship.

And then … he returned.

The Great Khali is back. JBL put him over on commentary as saying Khali’s the man who created the structure. The Philly crowd absolutely loved Khali’s appearance until they realized he was there to help the champion. Once he choked Orton through the cage and allowed Mahal to escape, all those, “Holy crap!” moments of excitement became, “Oh, geez!” moments of disappointment.

• Was anyone clamoring for The Great Khali to return? I didn’t think so. But, in the scheme of the storyline, I guess we can make sense of it. Or try to. Will he be involved heavily in storylines? Hopefully not. The last time he was really a monster was when he debuted against The Undertaker in 2006. Since that time, he became nothing more than a comic act before leaving WWE after they decided not to renew his contract in 2014. But now, he’s back.

• This means Orton is kind of done in the WWE Championship picture, right? He can’t beat Mahal no matter what. The WWE Champion said as much during his post-show interview on Talking Smack.

• It makes sense Corbin didn’t cash in his Money in the Bank briefcase now, doesn’t it? Why would he want to deal with Khali? Mahal didn’t look as physically worn as I thought he would, too. Bad sell job, or just the adrenaline from retaining his title?

• Cena needs to be involved in something worthwhile again. It was cool he returned and had a mini-feud with Rusev. But now, it’s time to get serious. Will he challenge for the WWE Championship at SummerSlam? Will he go after the United States Championship again?

• Styles and Owens have to have another match. That ending was putrid. That can’t be how the feud ends, can it?

• I’m glad New Day won. I didn’t think they would. Hopefully they can get a lot of mileage out of their SmackDown run because even though I predicted the team will break up sooner than later, I really don’t want them to. They’re still really entertaining.

• Natalya in a high-profile match may be her last hurrah. I don’t think she’ll win the title, but if she does, look for Carmella to quickly cash it in on her, possibly turning Natalya face.

• Nakamura in person is amazing.

• Will Zayn ever get a title?