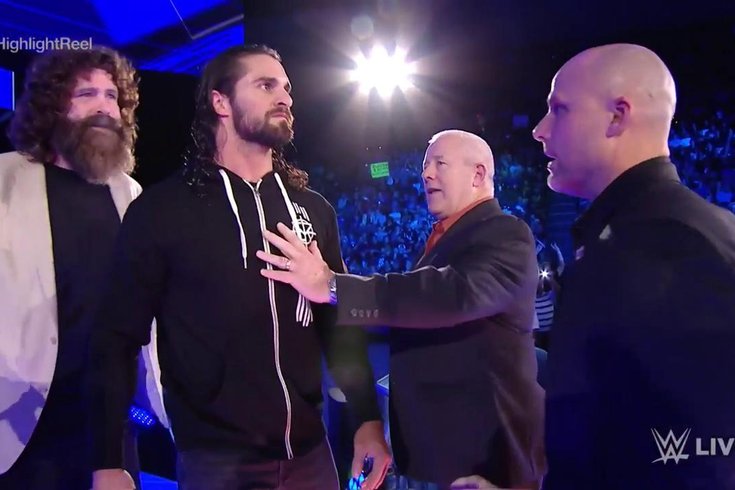 One day removed from the first Raw brand pay-per-view since 2007, the red brand brought their talents to the U.S. Bank Arena in Cincinnati on Monday night. While there was the first presidential debate at Hofstra University in New York and the 10th anniversary of the Superdome re-opening after Hurricane Katrina for ‘Monday Night Football,’ the people in attendance at the U.S. Bank Arena and the people watching on television at home were treated to two rematches from Clash of Champions.

So, naturally, one would expect at least one title change, right? Right?

The Highlight Reel with Chris Jericho had one of its biggest guests in its existence, when the WWE Universal Champion, Kevin Owens, was invited by his best friend forever to be his guest.

Owens talked down to the crowd as usual and talked about how Seth Rollins was no match for him.

Rollins came out but was prevented by WWE officials from reaching the ring. He was still selling his rib injury from Clash of Champions, and as Jericho and Owens taunted the crowd once Rollins left, Enzo Amore and Big Cass made their presence felt… finally!

It’s been a while since Enzo and Cass were put in a prominent position on Raw. Multi-man tag matches don’t make the cut. But I’ll take this one.

Think @WWEAaLLday21 is fired up for this main event? #RAW pic.twitter.com/JcNfm7JcXB

The war of words escalated between the four superstars, and the main event of the evening was set: Enzo and Cass vs. Owens and Jericho. But even though Enzo and Cass were in a prime position on the card, they still couldn’t get a victory. Owens nailed Enzo with a powerbomb for the win.

Reigns and Rusev meet in Clash of Champions rematch

This was an interesting start to Raw as the program went right into a title match – the first of two return matches from Clash of Champions – with Roman Reigns defending his newly won United States title against Rusev.

The two had a good, long match that ended on the outside of the ring when the referee counted them both out. But that wasn’t all. Rusev grabbed a chair and attacked Reigns’ back, but the champion would return the favor after hitting a spear and dishing out a chair shot of his own to his opponent’s back.

As quickly as @RusevBUL got his hands on the steel chair, it gets CATAPULTED away thanks to @WWERomanReigns' SPEAR! #RAW #USTitle pic.twitter.com/IiWEppS08s

I’m looking forward to a possible Hell in a Cell match between these two.

Four-hundred days and counting. After a rematch was announced on social media hours before Raw took the air, I thought this would finally be the time Luke Gallows and Karl Anderson get the better of The New Day and end their historic tag team championship reign.

And, of course, that didn’t happen.

Big E and Kofi Kingston continued their championship reign with a win over Gallows and Anderson… again. Kingston was busted open pretty good, but was able to hit Trouble in Paradise on Anderson and pin him to retain the titles for him and his team.

I’m not sure where Gallows and Anderson go from here. It’s downright embarrassing at this point. Hopefully there’s a plan in place for them to regain their momentum and become a must-watch segment again. Right now, they’re must-miss.

Cesaro and Sheamus get a tag team title shot

After Sunday night’s conclusion to Match 7 of the best-of-seven series between Sheamus and Cesaro, anyone with a semblance of common sense would have thought an eighth match between the two would be a fitting end to the feud.

But they’d be wrong. Apparently in storyline, it makes perfect sense just to put both Sheamus and Cesaro together as a tag team and give them a title opportunity at the Raw Tag Team Championship.

With New Day retaining their titles, it looks like Sheamus and Cesaro might have the golden ticket to finally take those titles from them. Because why have Gallows and Anderson hold the titles when you could have enemies Sheamus and Cesaro holding the gold?

These are the kinds of tags you can expect between @WWECesaro and @WWESheamus! #RAW pic.twitter.com/yDQO4N6kJC

Later in the program, Sheamus and Cesaro destroyed some jobbers so at least we have a visual of them teaming together. Because we so desperately needed that.

Charlotte vs. Sasha Bank set for next Monday

Fresh off winning the Triple Threat Match at Clash of Champions over Bayley and Sasha Banks, the Raw Women’s Champion, Charlotte, along with her protégé Dana Brooke, made her way to the ring for a promo. She bragged about winning the match on Sunday night and being the best women’s wrestler… ever.

Sasha Banks interrupted her and wanted a rematch for the title. Charlotte obliged, acting like she was ready to go right then and there, but then said she’d face her next Monday night at the Staples Center in Los Angeles.

So, it’s official. Charlotte vs. Banks next Monday night. That could very well main event the show.

Not only will we see a huge Women’s Championship match next Monday night, but we’ll also see the first Cruiserweight Championship defense from TJ Perkins on television as we get another rematch from Clash of the Champions. He’ll defend against Brian Kendrick.

·  Bayley d. Anna Fields by pinfall via the Bayley-to-Belly suplex.

·  Cesaro/Sheamus d. Nick Cutler/Willis Williams by pinfall after Sheamus hit Cutler with a Brogue Kick and Cesaro pinned him.