Clash of Champions: Owens and Rollins put on a great main event; Reigns gets gold 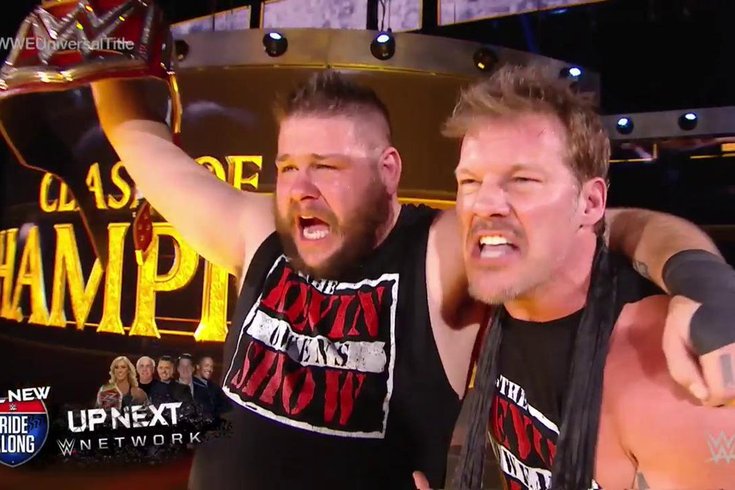 The Bankers Life Fieldhouse in Indianapolis held the first Raw post-brand extension pay-per-view on Sunday night. While the slight name change for the September pay-per-view brought back some fond memories from WCW’s old Clash of the Champions specials, this pay-per-view would be remembered for a few different reasons.

The Kickoff Pre-Show? No. But, hey, every Raw title was on the line, including the brand new Cruiserweight Championship. Let’s get to the action:

Well, Alicia Fox got more offense in this match than I thought she would. But it wasn’t nearly enough to make the match good or even noteworthy. Nia Jax won with the Samoan Drop.

The New Day © vs. Luke Gallows and Karl Anderson

The champions came out first, which is something I’ll never get used to. I’m just always resigned to the fact that champions come out last, even though I know it’s not always the case.

The New Day gave their typical promo to open the pay-per-view. Is it just me, or have the recent promos from the champions been lackluster recently? Is that all part of the plan that will build to an eventual split? That’s what I believed was happening heading into Sunday night’s tilt against Luke Gallows and Karl Anderson.

And when the match started, Gallows and Anderson laid waste to the champions, and looked like the monsters we’ve been wanting them to be portrayed as. But it didn’t last for long.

The match wasn’t that special, and the babyfaces cheated to win after Xavier Woods hit Anderson with Francesca II, allowing Kingston and Big E to hit Midnight Hour for the win.

WWE better have some big plans ahead for Gallows and Anderson. They’ve fallen flat on their face during this brand extension and look foolish. They’re better than this.

The ring crew covered the ropes with purple tape for this match, and I’m still not sure how I feel about that. Ring rope color is a very important visual effect for me. I like that it gave the cruiserweight match a distinct feel, but I didn’t necessarily need to see something like that.

Brian Kendrick and TJ Perkins had a pretty good match, but it was more so a traditional WWE-style match rather than the type we saw on the Cruiserweight Classic this past summer. Kendrick busted out Sliced Bread No. 2, but the champion was able to kick out.

Perkins got the win after locking in the kneebar submission, and Kendrick had to tap out.

After the match, the two shook hands, but Kendrick wound up headbutting Perkins before leaving the ring. Something tells me we’ll see these two wrestle again down the line on Raw.

I was interested in this match because not only did WWE go with the 3-0 comeback by Cesaro in this series, but also because it was never said what championship the winner will get a shot at.

I’ve thought all along it would be Rusev’s United States Championship. After Sunday night, nobody knows what’s going to happen now.

Each match of this series has been brutal. Stiff moves and it seems like these guys aren’t holding much back, if anything. That was evident when Cesaro hit a dive outside of the ring and looked like he landed right on his head and neck.

It was a scary scene and Cesaro’s reaction seemed like he was in complete shock. Maybe it was good acting, or maybe it was just an unnecessary risk to take and he finally realized that. Luckily, Cesaro was able to continue the match, but it didn’t last long.

The two brawled on the outside, resulting in doctors coming to their aid. They told the ref to call the match off and the series didn’t have a definitive winner.

I’m sure we’ll see an eighth match between these two. Let’s get a special referee in there so it doesn’t get too crazy now.

I thought Sami Zayn would get a big win against Chris Jericho on pay-per-view.

How stupid of me.

They had a good match and their chemistry in the ring is evident as they’ve been in plenty of matches together this year. But I just felt like this would be different and be the one singles match Zayn would have on his record other than the big win he had against Kevin Owens.

Then again, Jericho is a big name on the Raw roster and can’t just be fed to the young guys. He needs to look good. So, I understand that. I just wish Zayn would’ve won this one.

There were lots of good moves in this one, including a Michinoku Driver by Zayn, and a reversal of the Helluva Kick into the Walls of Jericho. After the Blue Thunder Bomb looked to give Zayn the path to victory, Jericho landed the Codebreaker to get the win.

I thought heading into this match, it was just a mere formality that Sasha Banks would regain the Women’s Championship for the Raw brand. With Charlotte defeating her at SummerSlam to regain the title, many thought Banks would be out of action for a while.

That was not the case. One month later, Banks was ready to take back the crown. However, that did not happen. Surprisingly, with Bayley inserted into the mix, Charlotte retained the title on Sunday night after hitting Bayley with a kick to the head after shoving her into Banks, keeping her on the outside of the ring, for the victory. Dana Brooke tried to get involved but was not successful, so it will be interesting to see if they just turn Brooke face and have her feud with Charlotte over the title and pair off Banks and Bayley again.

I hope that’s not the case. I do not have a problem with the potential feuds, but Banks and Bayley should be a title feud over Charlotte/Brooke.

I have liked this feud and thought it is a good way to get Roman Reigns cheered more, but Rusev has been such a great United States Champion and rebounded so well from a terrible 2015 that having him lose to Reigns might cost him momentum.

So, now we’ll find out. Rusev and Reigns had a good match at Clash of Champions – I still do not know why they couldn’t do that at SummerSlam – and now who knows if we’ll see another on-screen split between Rusev and Lana.

Lana pulled the referee out of the ring as he was set to count Rusev’s shoulders to the mat for the three count, and then the referee promptly banned her from ringside and sent her backstage. In the midst of all that, Rusev and Reigns traded offense that was capped after Reigns hit Rusev with a monstrous spear, thus gaining United States gold in the process.

This was Kevin Owens’ first main event to close a pay-per-view during his main roster tenure, and he made sure we all knew that before Clash of Champions even took the air Sunday night.

In all seriousness, that is awesome. I remember that pay-per-view and all the shenanigans that took place. I also wondered if it was foreshadowing to his match with Seth Rollins.

The two had a great match, and one that surpassed my expectations given this would be the first time they would go one-on-one against each other. Owens going after Rollins’ knee was perfect storytelling. We saw some innovative offenses from both wrestlers, including a Spanish commentary table spot, as is per the norm.

Rollins wound up knocking out the referee, so Jericho and Owens decided to take advantage of that for a bit. Stephanie McMahon came out with another referee while Rollins was trying to revive the “unconscious” one, but once Rollins got back in the ring, Owens hit him with the Pop-Up Powerbomb to retain his championship.

After the three count, the camera showed the Raw commissioner with a not exactly surprised look on her face, and more of a deceitful look. I have a feeling we’ll soon find out that she and Triple H have been in cahoots the entire time – because why not, they’re married – and Rollins’ focus will shift to a match with Triple H.

Overall, I thought it was a good pay-per-view with a really fantastic main event. The match was given time to breathe and regardless of Jericho’s inclusion and the ref bump, it wasn’t an overbooked mess.

Stay tuned to PhillyVoice for my Raw roundup on Tuesday morning as we’ll find out the fallout from Clash of the Champions on Monday Night Raw.