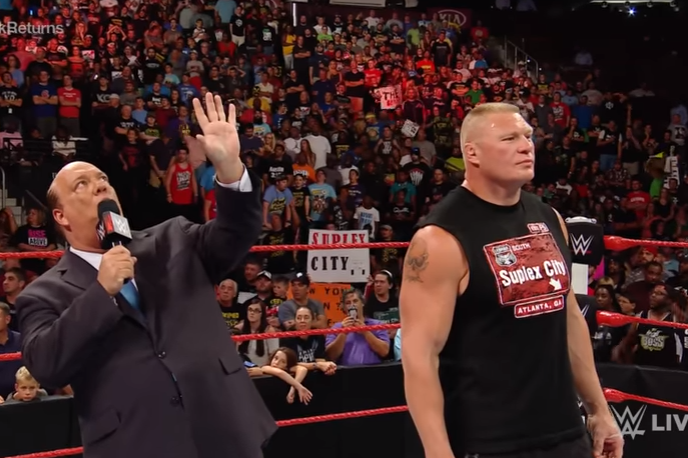 Atlanta’s Philips Arena had hosted many editions of WWE’s Monday Night Raw, but on Monday night, it was the first time this venue was hosting a Raw in the New Era. And that New Era included the return of the Beast Incarnate, who has been absent from television since the New Era began.

WWE kicked off August with a scorching episode of Raw, but couldn’t live up to the hype and excellence of the previous Monday’s Raw. That was to be expected, though. I still think it was a really good episode and the last two weeks, the company has done everything they could to make a weekly three-hour show as entertaining as possible with commercials added in. It’s not easy.

The Beast is back… and the Viper welcomes him

We’ll have our first “interpromotional” match of the New Era with Lesnar vs. Orton, and the Legend Killer made sure to send a message on Monday night.

Orton hightailed it through the crowd as Stephanie McMahon and Raw general manager Mick Foley came down to the ring.

Rollins and Bálor confront each other ahead of their SummerSlam match

Finn Bálor’s was scheduled to have a one-on-one interview with Michael Cole, but Seth Rollins interrupted and confronted his SummerSlam opponent. With the first-ever Universal Championship at stake, this could be the biggest match in each of their respective careers.

Despite Rollins’ interruption, it didn’t deter Bálor. The Demon talked about how nothing was ever handed to him, which lit a fire under Rollins. The passion in this promo was evident from both men, as Rollins was none too happy about being labeled as someone who is handed things and doesn’t earn them, especially after coming back from a torn ACL.

Later in the show, Rollins took on Sami Zayn and defeated him with the Pedigree.

Charlotte pins Sasha Banks one week after losing her title

The new WWE Women’s Champion opened the show as Sasha Banks addressed her huge win from last Monday night. She was interrupted by Charlotte as we were reminded these two will go at it again at SummerSlam in a rematch for the Women’s Title.

Strangely enough, Chris Jericho interrupted Banks before Enzo Amore came down solo to back her up. They had a pretty entertaining promo before Foley interrupted and made a mixed tag team match. I can’t remember the last time we saw one of them, but I’m a fan of these matches. They’re unique and pretty cool.

It gave us a glimpse and what we could see out of Amore as a singles competitor. I don’t think they’ll split him and Big Cass up anytime soon – they’re the most over act on any roster right now – but they will be split up eventually. And I think both Amore and Cass would do just fine on their own.

Charlotte got the pin on Banks after hitting Natural Selection. Will we see her regain the Women’s Championship at SummerSlam? Now we have reason to believe she absolutely can.

What’s next for Roman Reigns?

Raw general manager Mick Foley gave Mark Henry an opportunity at the United States Championship, seeing as how he’s heading down to Rio for the Olympics as the official WWE ambassador. Rusev defeated Henry by submission via The Accolade, but the segment wouldn’t end there.

Rusev grabbed the mic and ran down America, as usual, before Reigns’ music hit and he made his way down to the ring. He and Rusev stared each other down before the champion looked like he would be leaving the ring, but he caught Reigns with a punch that staggered him. Rusev was able to escape the ring once Reigns gained momentum, but Reigns followed him to the outside and hit him with a Superman Punch. Rusev pretty much no-sold the punch and got right up and staggered to the entrance ramp.

Usually, main eventers go through the midcard before reaching the top of the card. That includes winning one, or several, secondary championships such as the Tag Team Titles, the Intercontinental Championship and, now, the United States Championship.

John Cena did it. Dean Ambrose did it. Stone Cold Steve Austin did it. The Rock did it. But Reigns did not. Neither did Rollins for that matter. But there’s something to be said for winning a midcard championship before being skyrocketed to the top. Fans tend to respect that more. And if Reigns was able to capture the United States Championship, that might be his only way of getting back to the top of the mountain and not have the entire crowd against him.

• Luke Gallows and Karl Anderson lost in quick order to Big E and Kofi Kingston in a Non-Title match, but they completely destroyed them along with Xavier Woods after the match. I’m sure this is far from over.

Gallows and Anderson injured Big E by wishboning him on the steel post, which is never pleasant.`

• Darren Young and Titus O’Neil revived their on again/off again rivalry, and it doesn’t look like it was just a one-off. On the Raw Preshow, O’Neil joked about the whole “Make Darren Young Great Again” mantra, asking when has Young ever been great.

During their match on Raw, O’Neil grabbed the win, literally, after rolling up Young and holding onto his tights for the pin. Backstage, Backlund confronted O’Neil about his cheating ways, and Young flew in with a punch after O’Neil threatened to beat up Backlund.

• Jinder Mahal is back as he defeated Heath Slater to win a Raw contract.

• Mixed Tag Team Match: Charlotte/Chris Jericho d. Sasha Banks (c-W)/Enzo Amore by pinfall via Natural Selection. Jericho gave Amore the Codebreaker after the match before Big Cass came out for the save.

• Shining Stars d. Golden Truth by pinfall via a rollup as R-Truth was distracted as he played Pokémon GO on his phone.

• Nia Jax d. Ariel Monroe by pinfall via what looked like her own version of an Attitude Adjustment!

• Non-Title: The New Day (c-Tag) d. Luke Gallows/Karl Anderson by pinfall after Big E rolled up Anderson for the three.

• Cesaro d. Sheamus by pinfall via the Neutralizer.

• Jinder Mahal d. Heath Slater by pinfall via a kick to the face to earn a Raw contract.

• Seth Rollins d. Sami Zayn by pinfall via the Pedigree.