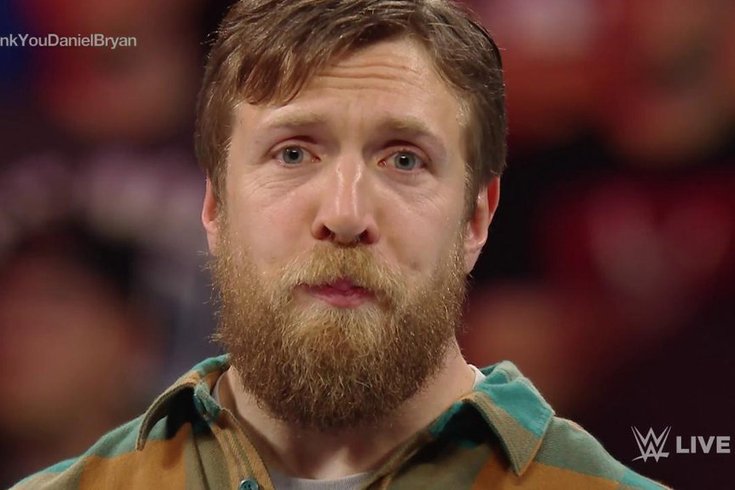 Daniel Bryan retired from professional wrestling on Monday night after many bouts with head injuries over the years.

Seattle’s KeyArena was the host for Monday Night Raw this week, and the big story coming out hours before Raw took the air was Daniel Bryan announcing his retirement on Twitter.

Due to medical reasons, effective immediately, I am announcing my retirement. Tonight on Raw, I'll have a chance to elaborate. #gratitude

The news reportedly resulted in a very somber mood backstage during the day, all the way through Raw until Bryan was able to address the audience in the main event segment of Raw. He officially retired due to reoccurring head injuries over the years.

Bryan also won the Intercontinental Championship last WrestleMania in a Ladder Match and had to forfeit that due to his latest injury. It’s never fulfilling when an athlete can’t retire on his or her own terms. But it seems like Bryan has finally made peace with the decision.

Will we see him in the ring in the independent wrestling scene again? I surely hope not.

Godspeed, Daniel. Here’s the celebration continuing on the WWE Network after Raw went off the air.

Along with Bryan’s retirement, we had some build toward Fastlane, the next WWE pay-per-view coming at us in two weeks. Raw featured a contract signing for the Fastlane main event, a tag team heading back to its old roots, and a surprising win for one of the forgotten about Divas.

Here are the other main stories coming out of Raw:

The combustible elements of the Fastlane main event were all in the ring as Raw kicked off from Seattle Monday night. Call me a bad fan all you want, but I’m a fan of contract signing segments.

Dean Ambrose, Roman Reigns and Brock Lesnar all entered the arena to sign their John Hancock to the contract for Fastlane. Ambrose thought it would be a good time to try and avenge what Lesnar did to him last Monday night – Lesnar leaving him lying in the ring after an F5 – and decided to chest bump the Beast. Well, he wasn’t having any of that. He threw Ambrose across the table into Reigns, picked up the table and threw it at Reigns and then hit Ambrose with another F5.

In case you were thinking of eventually testing your luck against Lesnar, I recommend just relaxing a bit and thinking twice about that. Ambrose didn’t think twice.

Later in the program, Ambrose rushed to the ring and called out the Beast, to which Lesnar obliged. He came to the ring and eventually hit the F5 on Ambrose again. As he was about to walk away, Ambrose called him back in, so Lesnar returned. Reigns’ music started, and Lesnar’s attention went from Ambrose to Reigns, and that’s exactly the opening the Lunatic Fringe needed.

Ambrose hit the Beast with a low blow and got his retribution… for now.

The New Day was able to recruit Mark Henry for their Tables Match against The Usos and the team that wanted to partner with them for this match, the Dudley Boyz.

The Dudleys hit the 3D on Big E to get the win for them and the Usos, but they weren’t finished yet.

Chris Jericho was a guest on Miz TV and turned it into the Highlight Reel rather quickly. Jericho will face AJ Styles on SmackDown Thursday night in a rematch from their encounter two Mondays ago. Miz attacked Jericho when Styles came out, but Styles and Jericho both took out Miz and then came to blows with each other.

Does @AJStylesOrg have what it takes to defeat @IAmJericho TWICE? We'll find out on #SmackDown THIS THURSDAY! #RAW https://t.co/9ZshQzARWI

Miz dragged Jericho outside of the ring, but couldn’t get the better of him. Jericho walked away instead of getting into another confrontation with Styles. Thursday’s match should be excellent. Maybe an early match of the year candidate? We can only hope.

When’s the last time Tamina won a match before Monday night? I don’t really remember which is pretty bad. While Tamina and Becky Lynch faced off in the ring, Sasha Banks was on commentary while Naomi was on the outside of the ring cheering on her fellow teammate. Tamina yelled at Sasha, so The Boss got up and walked toward the ring before Naomi attacked her, to which Becky makes the save. But Tamina hit her with a wicked superkick upon her return to the ring for the win.

Come on, R-Truth! Give Goldust a chance!

• Dolph Ziggler d. Kevin Owens by pinfall after holding the ropes with his feet during the pin.

• Adam Rose d. Titus O’Neil by pinfall via a rollup after Heath Slater distracts O’Neil from the outside of the ring.

• Tamina d. Becky Lynch by pinfall via a superkick.

• Tables Match: The Usos and the Dudley Boyz d. The New Day and Mark Henry after the Dudleys hit the 3d on Big E through the table.