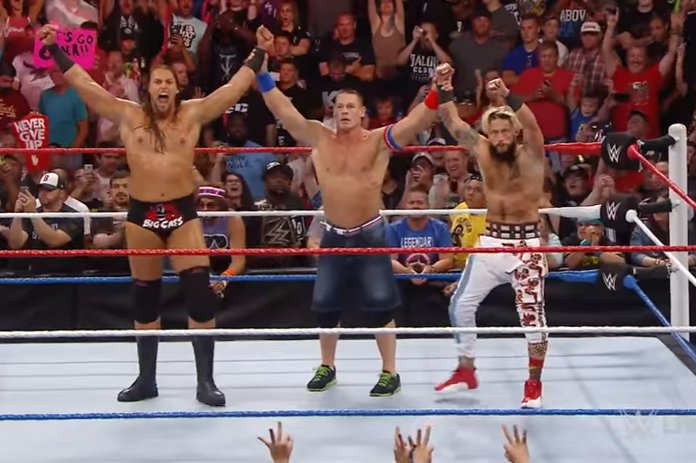 John Cena raises the arms of Big Cass and Enzo Amore after they saved him from another beating by AJ Styles and The Club on Monday night.

WWE celebrated the birth of the United States of America at the Nationwide Arena in Columbus, Ohio on Monday night. Sporting the old school red, white and blue ropes along with the July 4th theme from the beginning of the show until the end, this was probably one of my more favorite holiday episodes of wrestling in a while. Halloween and Thanksgiving are usually the best, with Christmas-themed episodes a close second. But WWE really tried to put on an entertaining show on the nation's birthday.

Regardless of the holiday, WWE made some big moves in trying to get some added attention and made a pretty big announcement, which will actually be a future announcement, during the show.

A Fourth of July food fight

The show began with footage from a food fight earlier in the day. During a pre-Rawbarbecue, some wrestlers got out of hand and began a huge food fight that seemingly everyone cleaned up well from. My favorite part was probably Big Cass saving his partner from having punch dropped on his head.

After Lilian Garcia sang America’s national anthem, the United States Champion Rusev made his way down to the aisle to defend his title against Titus O’Neil, who was wearing a ridiculous outfit for the Fourth of July.

This feud has gotten much better in recent weeks with O’Neil really stepping his game up and not being another name to throw in Rusev’s path. However, I didn’t think it’d be a good move to have O’Neil win the U.S. Championship on Monday night, and, thankfully, he didn’t.

I like O’Neil a lot, but Rusev has rebounded well from last year’s and early this year’s ridiculous booking of his character, and he’s got so much momentum. Yeah, losing the title Monday just to win it back on Thursday or maybe even next Monday would be fine, but that could do more harm to O’Neil than helping Rusev. The champion retained after he got O’Neil to submit to The Accolade.

Cena finally gets some help against The Club

John Cena called out The Club, who obliged his wishes. After AJ Styles made another burial reference – a clear indication that WWE loves poking fun at internet marks – his group made their way to the ring and attacked Cena. It took a while, but Enzo Amore and Big Cass, who wrestled earlier in the night, came out for the save. As it turns out, there will be a six-man tag team match at Battleground, pitting Cena, Amore and Cass against The Club.

That makes room for Cena and Styles to open the first live SmackDown main event and a rubber match at SummerSlam. Sure, I’m fantasy booking right now, but how awesome would that be? It wouldn’t surprise me if that’s the route the creative is going.

And how about the push Enzo and Cass are getting? They’ve skyrocketed to the top and are now in a marquee match at Battleground alongside the face of the company against the biggest force in the company. Yeah, the WWE World Tag Team Championships shouldn’t be that far off in the future.

Cena , while not the most popular wrestler among internet folk, has gained much respect the last few years from fans, young and old. Aligning Enzo and Cass with Cena is meant to increase their popularity, and I think it will.

Ambrose gets the better of Rollins

The WWE Champion Dean Ambrose and one half of his challengers at Battleground, Seth Rollins, were in action Monday night. First, Ambrose disposed of the WWE Intercontinental Champion, The Miz, much as he did last Thursday night on SmackDown. But he wasn’t done there.

As Ambrose was leaving the ring, Rollins’ music hit and he was ready for his match against Dolph Ziggler. Rollins soundly defeated him with The Pedigree, but Ambrose stayed for the match at ringside on commentary, first joining the Spanish-speaking announcers before re-joining the English-speaking ones. Rollins took the mic and got on top of the announce table after his match boasting about how Reigns still should be out of the Battleground main event. Ambrose responded, by standing on top of the other announce table, and, of course, starting a brawl with Rollins at ringside.

Ambrose hit Rollins with Dirty Deeds on top of the announce table, but it didn’t bend or break. I’m not sure if it was supposed to, but if you’ve watched WWE at all, you’d probably think it was meant to collapse. Hopefully Rollins is OK.

Ambrose left after sending his message.

The Wyatt Family produced an eerie promo inviting The New Day to their “compound” which appears to be in the middle of nowhere. Of course, Kofi Kingston and Big E continue to joke around about the Wyatts, but on Monday night, Woods had had enough of the jokes.

Kingston and Big E said they accepted the invitation to their compound, and they were going to “spray positivity from the windows to the walls.” Woods yelled at them both and told them Bray Wyatt and his family was dangerous. He said everything up until now was fun and games, but that Wyatt and co. were a threat to them and he didn’t think the group could survive. Then he walked off.

Woods has been fantastic in his subtle mannerisms the last few weeks, but I don’t think this spells the end of The New Day just yet. Like every great professional wrestling group, their time together will come to an end eventually. I just don’t think that happens soon.

The Vaudevillains are better than they’re perceived

The Vaudevillains were used as fodder for R-Truth and Goldust and I’m not too thrilled about that. Aiden English and Simon Gotch have shown they’re pretty good on the mic and their skills in the ring are just fine by WWE’s standards. Yeah, Gotch botched throwing Amore to the outside of the ring at May’s Payback pay-per-view, causing a concussion, but I’m willing to bet he’s done that move hundreds of times. In pro wrestling, sometimes accidents happen.

I’m not sure if that incident is the reason the duo hasn’t been pushed higher up into the tag team scene, but with the WWE World Tag Team Champions focused on the Wyatt Family, and WWE’s refusal to book any other tag team feuds, it doesn’t look good for English and Gotch. They deserve better.

In this week’s edition of former SmackDown general managers return, Vickie Guerrero made her triumphant return to WWE. And then promptly got booted.

Lesnar’s SummerSlam opponent to be revealed on SmackDown

Who will @BrockLesnar face at @WWE @SummerSlam? Find out THIS THURSDAY on #SmackDown on @USA_Network! pic.twitter.com/5aQzEyhRBZ

In the middle of the program, WWE announced that Brock Lesnar’s opponent for SummerSlam in August would be announced this Thursday on SmackDown. While SmackDown goes live in two weeks on Tuesdays, it appears that they’ll hold off until Thursday to make the announcement live during SmackDown instead of leak the information during Tuesday’s television tapings. It wouldn’t make sense to announce Lesnar’s opponent at Tuesday’s tapings. With UFC 200 this coming Saturday, and Lesnar facing Mark Hunt in his first MMA bout since 2011, the WWE has taken full advantage of Lesnar’s name value and turned it into promotion for its own gain.

We had enemies on the same sides and friends on opposite sides during this match, reminding me of the Wild Card match at Survivor Series 1995. Cesaro and Swagger played to their previous team from a year ago with a “We The People!” salute and then tangled up with each other.

And, of course, enemies couldn’t co-exist for the entire match.

Big Show and Zack Ryder eliminated Sheamus to take home the win for Team U.S.A. What a roller coaster of a year it’s been for Ryder, eh?

• Seth Rollins d. Dolph Ziggler by pinfall via The Pedigree.

• The Golden Truth d. The Vaudevillains by pinfall via Solid Gold.

• Becky Lynch d. Summer Rae by submission via the Dis-Arm-Her.

• Kalisto eliminated Bubba Ray via a big splash after Sheamus hit him with a Brogue Kick.

• Cesaro eliminated D-Von Dudley by submission via The Sharpshooter.

• Jericho eliminated Swagger by pinfall via The Codebreaker.

• Henry eliminated Kalisto by pinfall via the World’s Strongest Slam.

• Owens eliminated Henry by pinfall via the Pop-Up Powerbomb.

• Owens was disqualified for hitting Sami Zayn with a chair.

• Kane was disqualified for hitting Owens with a chair.

• Apollo Crews eliminated Zayn by pinfall after a standing moonsault.

• Zack Ryder eliminated Cesaro by pinfall via a rollup after countering The Neutralizer.

• Big Show eliminated Jericho by pinfall via the Knockout Punch.

• Big Show eliminated Del Rio by pinfall via the Chokeslam.

• Ryder eliminated Sheamus by pinfall via the Ruff Ryder to win the match for his team.