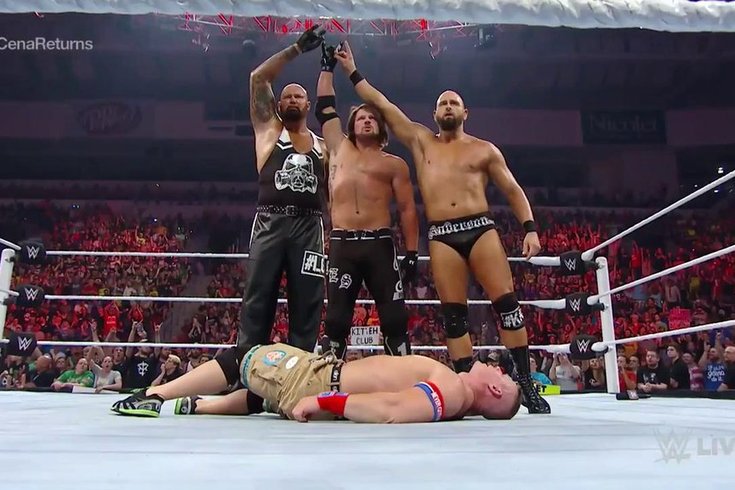 AJ Styles turned on John Cena moments after shaking his hand welcoming him back to WWE on Monday night.

Monday’s Memorial Day edition of Raw took place in Green Bay, Wis. at the Resch Center. The long-awaited return of John Cena as an active competitor was the major headline going into the show as WWE has advertised his return for over a month.

Conversely, WWE decided not to advertise Seth Rollins’ return when he surprised everyone and attacked Roman Reigns last Sunday after the Extreme Rules main event, which found Rollins’ impact propelling him into the main event of the Money in the Bank pay-per-view.

Before the show started, WWE paid tribute to the men and women who have sacrificed their lives for our country with a ten-bell salute, followed by this video package:

No plans for the brand extension yet

Shane and Stephanie McMahon led off Raw with a promo about how they pretty much have no idea what they’re going to do regarding the brand extension. Sounds solid. The New Day saved the segment with their humor and quick wit, but that’s about it.

Aiden English and Simon Gotch saved us from a dancing contest, too.

The WWE World Tag Team Champions took on the Vaudevillains in the opener, but Luke Gallows and Karl Anderson ended that match prematurely after attacking Xavier Woods, Kofi Kingston and Big E. Later on, Gallows and Anderson would tell Renee Young backstage that they weren’t done yet.

Cena returned to Raw Monday night and asked the question, “Do I still belong here?” The New Era is now here and he said the future had to run through him. AJ Styles came out and the two let the crowd tell a story for a few minutes, as half the crowd was chanting for Cena and the other half Styles.

It was a great moment and probably the best moment of the show. Styles extended his hand to welcome Cena back to WWE, and the two shook hands.

"I just wanted to be one of the first to say...welcome back!" - @AJStylesOrg to @JohnCena #RAW #CenaReturns pic.twitter.com/yXCmpO2UYb

Styles is now a heel, for all intents and purposes, and a program with Cena will be nothing but money for WWE.

Styles teased leaving a few times before running back into the ring and continuing his onslaught to Cena, with even his teammates trying to hold him back. “You’re welcome, world! You’re welcome!” Styles exclaimed as he left the ring.

PLUS: We'll hear from @AJStylesOrg @LukeGallowsWWE & @KarlAndersonWWE on the attack of @JohnCena! #SmackDown #RAW pic.twitter.com/H5viWbRZDc

It sure makes SmackDown must-watch television on Thursday when Styles will explain why he attacked Cena.

The WWE World Heavyweight Champion came out to address the return of his former Shield teammate who hit him with the Pedigree last Sunday. Reigns would call out Rollins, who came out and then teased getting in the ring, then talking to the crowd and Reigns on a mic, to getting in the ring again, two, three, four times even. It was kind of annoying mainly because the segment was flat to begin with.

In fact, it was a complete waste of a segment that made Rollins look pretty bad. I understand the trying to fake Reigns out, but he should have at least attacked him backstage later on in the show. He looked like a fool out there.

We thought we were going to see seven participants in the Money in the Bank Ladder Match, but it looks like we’re just getting the six that qualified on Raw and SmackDown last week. The six participants wrestled in a six-man tag team match main event Monday night, with Dean Ambrose, Cesaro and Sami Zayn on one team and Alberto Del Rio, Chris Jericho and Kevin Owens on the other.

Ambrose got the win for his team after hitting Dirty Deeds on Owens.

Rusev and Titus feud in the making?

Rusev made quick work of former Intercontinental Champion Zack Ryder on Monday night, submitting him to the Accolade. No United States Championship on the line in a match on Memorial Day. After Rusev’s match, he took the mic but Titus O’Neil came out and challenged him, must like he did last week. The champion backed down, but I think these two will cross paths again soon.

Apollo gets some advice from a big source

Big Show made a rather quiet return to the television screen, giving Apollo Crews some advice after hewas beat down by Sheamus last Monday night. Show told the rookie Sheamus attacked him because he thinks Crews will back down. He wanted to know if Crews would let that happen. Good small segment.

After Raw went off the air, WWE Network aired an episode of “WWE 24” that followed Rollins on his road to recovery from his knee injury. Here’s a sneak peek:

• Non-Title: The New Day (c) d. The Vaudevillains by disqualification after Karl Anderson and Luke Gallows attack all three.

• The Usos d. Tyler Breeze/Fandango by pinfall after Jey Uso pins Fandango with a crucifix. R-Truth and Goldust were on commentary during the match, and engaged in a brawl with Breeze and Fandango after the match.

• Enzo Amore/Big Cass d. the Dudley Boyz by pinfall via the Rocket Launcher.

• Dana Brooke d. Natalya by pinfall via a Michinoku Driver. After the match, Charlotte and Brooke continued to beat down Natalya until Becky Lynch ran down for the save.