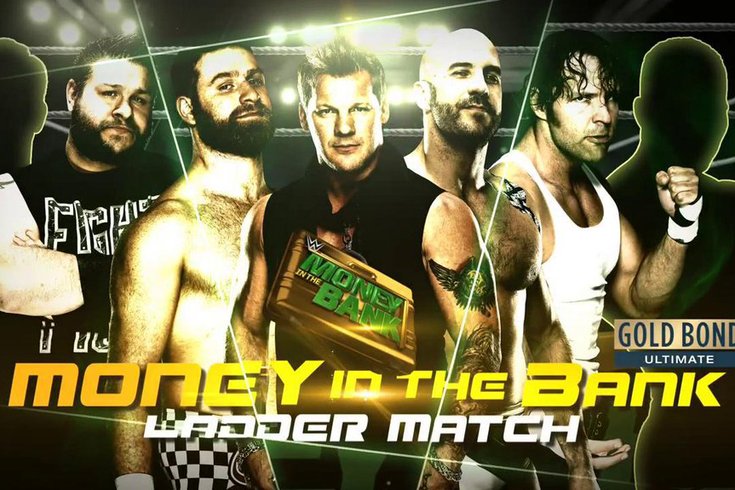 Five Money in the Bank spots have been filled. Two are left.

One day removed from Sunday’s Extreme Rules pay-per-view, the Royal Farms Arena in Baltimore hosted Monday Night Raw. The fallout from Extreme Rules was more of a new direction headed straight towards next month’s Money in the Bank pay-per-view.

We were treated to five Money in the Bank qualifying matches, a surprising return, and a surprising familial break up. We also saw another break up of sorts. I’ll get to that soon.

WWE sure won’t let us forget.

The main event is set for Money in the Bank

Seth Rollins made his triumphant return to television at the beginning of Raw on Monday night. The crowd was cheering him loudly, and he even acknowledged it before he began talking in the ring. However, it was short-lived good natured Rollins, because he promptly turned on the fans by citing how much they had hated him while he was champion and all of a sudden pulled a 180-degree turn when he got hurt. He said that he didn’t need anyone to recapture the championship he never lost, and that brought out the current WWE World Heavyweight Champion and guy who ate a Pedigree at the hands of Rollins on Sunday night.

Shane McMahon came out and didn’t waste any time in making the main event for June’s pay-per-view. The main event will be Reigns defending his title against Rollins. I have a feeling it won’t be the last match between the two.

Later in the night, Stephanie approached Rollins backstage and said their new business arrangement wouldn’t be similar to the way The Authority’s was before he got injured. Rollins looked confused as Stephanie walked away.

Money in the Bank qualifiers get underway, The Club disbands

The Money in the Bank Ladder Match is next month, so Monday night there was no wasting time as five Money in the Bank qualifying matches were put together. Kevin Owens and AJ Styles fought each other in the main event, but before the match began, Styles disbanded The Club after only a few weeks together.

Styles blamed his brethren, Luke Gallows and Karl Anderson, for him losing the Extreme Rules match Sunday night against the champion. They didn’t take kindly to Styles’ blaming them, and said they weren’t his friends anymore.

Styles would go on to lose clean to Owens via a Pop-Up Powerbomb with no interference from Gallows or Anderson.

Cesaro defeated The Miz with the Neutralizer and Chris Jericho defeated Apollo Crews with the Codebreaker.

I don’t mind this one as much because Sheamus attacked Crews backstage after losing to Sami Zayn in another qualifying match, likely igniting a feud between those two.

The WWE Women’s Champion along with her father and new bestie, one would surmise, made her way to the ring to drop a bit of a bombshell Monday night. Even though she had the help of Dana Brooke by way of her distracting Natalya at Extreme Rules allowing her to retain her title, Charlotte made it clear she was done being in the shadow of her father. She completely turned on him, ran him down verbally and it was one of the more awkward but powerful promos we’ve seen in a while. The emotions both Flairs felt could be captured by the viewing audience through the screen, so I’m sure it was just as hard for Charlotte as it was for Ric.

'My spotlight burns BRIGHTER than YOURS ever did! EVER!" - @MsCharlotteWWE to @RicFlairNatrBoy #RAW1200 pic.twitter.com/V9jKn6LU6U

But, this had to happen. In pro wrestling, these storylines happen. This has been subtly built for a while, but no television time has really expanded on it. During an interview with Michael Cole a few weeks ago, Ric said he wasn’t convinced Charlotte could beat Natalya by herself. That didn’t make Charlotte too happy. There have also been more subtle hints, so for Charlotte to finally ditch the outside interference – despite still being involved with Brooke – was a welcome sight.

Now is her time to shine. Hopefully, she can make it a memorable run.

We thought we were going to see Colin Cassady in one-on-one action once again, but not before he reintroduced Enzo Amore, who received a huge pop from the Baltimore crowd. Amore’s glorious promo skills were back, and so now we can just enjoy. The timetable on him getting back in the ring still isn’t confirmed, but it was great to see him back on television and back in character.

And Big Cass pinned Bubba Ray Dudley, too. It couldn’t have been a better night for Enzo and Cass.

The WWE World Tag Team Champions celebrated the 1,200th episode of Monday Night Raw with some cake before their six-man tag team match against the Social Outcasts. After teasing throwing the cake onto young fans in the audience, JBL and Byron Saxton, The New Day had to get serious after the Social Outcasts attacked them to ruin the celebration.

The celebration wasn’t ruined for long, though. The champions defeated the trio of outcasts and then smashed the cake into Heath Slater’s face on the outside. That’s unbelievable – why would they ruin such a great cake?

• Money in the Bank Qualifying Match: Sami Zayn d. Sheamus by pinfall via the Helluva Kick.

• Money in the Bank Qualifying Match: Cesaro d. The Miz (c-IC) by pinfall via the Neutralizer.

• Money in the Bank Qualifying Match: Chris Jericho d. Apollo Crews by pinfall via the Codebreaker.

Just one day after releasing Cody Rhodes, WWE officially released Adam Rose (real name Raymond Leppan) on Monday. According to WWE’s website, Leppan requested the release, much as Rhodes did.

Rose was suspended for violating WWE’s Wellness Policy and was recently arrested and charged with domestic violence and witness tampering.